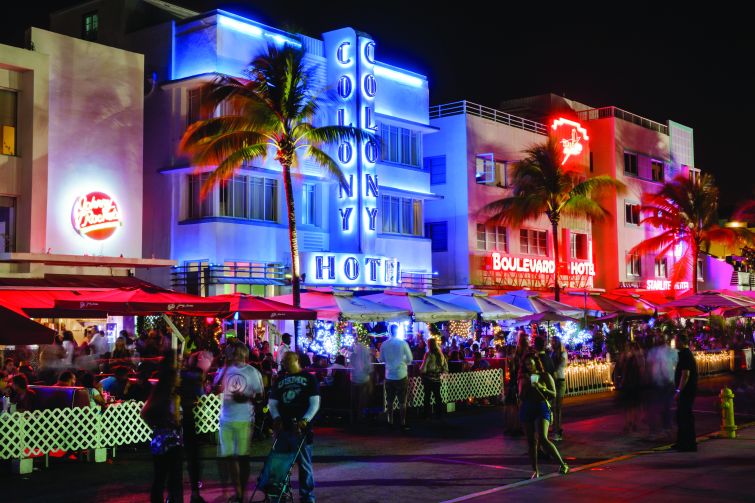 The smell of pot was unmistakable. Crowds gathered. Bars blasted dance music. At 6 p.m. on a recent Saturday, the parties were just getting started on Miami Beach’s Ocean Drive. The good times would continue through early the next morning, with alcohol flowing freely on the iconic promenade — alongside the city’s most cherished Art Deco architecture.

“Ocean Drive is our city’s postcard,” Miami Beach Mayor Dan Gelber has told Commercial Observer. “But it hasn’t had a code of conduct.”

The oceanfront promenade is among the most storied streets in the world. But over the past decade, it’s drawn the ire of locals because of unruly partying, rowdy clubs and spring break debauchery.

Gelber has launched a crusade to overhaul the street’s wild image — igniting a vicious fight among local business owners, politicians, developers and residents. At the center of the controversy is a proposal that would change the cutoff time for businesses to serve alcohol, to 2 a.m. from 5 a.m. Critics fear the rule will lead to revenue loss for local businesses, and they say it proves the city caters to the wealthy and to developers, who hope to replace the unseemly bars with high-end shops and condominiums.

The battle comes at a crucial time for the booming Miami area. During the pandemic, the Florida hub lured some of the world’s wealthiest tycoons and preeminent names in finance and tech. As the emblematic symbol of Miami Beach, Ocean Drive’s future will play a decisive role in determining whether the area remains a sun-soaked party destination or evolves into a serious business and cultural capital.

It’s the latest chapter in Ocean Drive’s tumultuous history. Miami Beach, incorporated in 1915, was a destination for the rich to vacation, its Mediterranean-style buildings serving as elegant backdrops. But in 1926, a hurricane destroyed much of the island. During the reconstruction, Ocean Drive, with its Art Deco gems, came to be. Low-rise hotels, such as the regal Clevelander Hotel, graced the oceanfront.

The street soon fell out of favor, though. After World War II, tourists preferred larger hotels like the famed Fontainebleau, farther north on Miami Beach. These postwar resorts offered more amenities, such as large pool decks, explained Daniel Ciraldo, the chair of the Miami Design Preservation League. Retirees took over Ocean Drive properties. The structures decayed. And the street fell into its first decline.

The revival went too far. The delicate historical sites became mass market attractions. Just as Paris’ Champs-Élysées and the area surrounding Rome’s Trevi Fountain went downhill under a deluge of tourists, Miami Beach’s Ocean Drive lost its cachet in the eyes of locals.

“It’s really like a port in a developing country or Caribbean country. It’s not reflective of where we are today,” said Don Peebles, who developed a luxury condo in Miami Beach and resides in the city, but hasn’t stepped foot on the avenue in a decade.

Despite Ocean Drive’s decline, the rest of Miami Beach remains home to some of Florida’s most expensive hotels, condos and houses. During the high season, hotels farther north on Miami Beach, including The Fontainebleau, The Edition and Faena, command nightly rates above $1,000. Those prices dwarf hotel rates in the entertainment district, which includes Ocean Drive.

Attracted by Florida’s low taxes and pro-business policies, billionaires began relocating to Miami after the first COVID-19 lockdown. Many, including financiers Dan Loeb and Orlando Bravo, chose to settle in Miami Beach along North Bay Road, snapping up waterfront homes for record prices.

All the while, hotels on Ocean Drive were forced to drop their rates to stay afloat. Along with discounts and the lack of COVID-19 restrictions in Florida, partying escalated. During the 2021 spring break season, thousands of college students converged on the street. Chaos ensued. The police struggled to quell the unruly celebrations.

Ocean Drive was also the scene of a horrific murder. A few months after the spring break debacle, a 21-year-old tourist was shot dead while dining outside at La Cerveceria de Barrio restaurant. The assailant, who had randomly chosen the victim, was “high on mushrooms which made him feel empowered,” according to the police.

The city initiated reforms. In May 2021, Miami Beach commissioners voted to slash the hours business could serve alcohol, cutting last call by three hours in the entertainment district, which runs between Fifth and 16th streets, along Collins Avenue and Ocean Drive.

Many business owners protested, including the Clevelander Hotel, which sued.

“The city has declared war on South Beach’s famed entertainment district,” the 90-page lawsuit alleges. A month later, a judge struck down the measure. (Clevelander Hotel did not respond to a request for comment.)

Undeterred, Gelber put a citywide, 2 a.m. alcohol ban on the ballot during his reelection campaign in the fall of 2021. The campaign turned into a bare-knuckle fight between the mayor and business owners.

The Miami Beach Chamber of Commerce released a report charging that the alcohol restriction could cost Miami Beach businesses as much as 4,100 jobs and $227 million in annual revenue in addition to $14.6 million in lost tax revenue.

Yet proponents of the mayor’s effort — including some of the biggest names in area real estate, like Related Group’s Jorge Perez, Starwood Capital’s Barry Sternlicht and Peebles — argued Miami Beach’s hedonistic image was holding it back. For instance, Miami Beach lost most of the headline-grabbing office leases last year to Miami’s business district, a separate municipality across the Biscayne Bay.

The mayor also went to great lengths to gain the support of the real estate industry. An unflattering audio was leaked showing Gelber courting unnamed developers.

“I’m prepared to do whatever we need to do and support any idea even if it’s not particularly popular,” Gelber is heard saying.

The audio alarmed critics, who feared the true motive of the law was not to revamp the street, but to raise money and benefit developers. It surfaced amid concerns about the Miami area’s affordability. During the pandemic, the area became one of most expensive regions in the country, rivaling New York and San Francisco. (A public watchdog dropped an ethics complaint against Gelber concerning the tape, claiming his actions didn’t legally meet the standard of wrongdoing.)

In November 2021, Miami Beach residents sided with the mayor. Not only did they reelect Gelber, 56 percent voted in favor of the alcohol restriction.

For Gelber, the ultimate goal is to create a well-rounded neighborhood, where people go out at night, but also work and live. The alcohol limitation measure is only the first step in repositioning the district.

“Nobody is going to want a gallery or a condominium or boutique office on top of an all-night bar,” Gelber explained.

The mayor also wants to attract new investment. He has proposed changing zoning laws on Collins Avenue, the street behind Ocean Drive, to allow an additional 25 feet of height. Under his plan, car access would be limited on Ocean Drive, turning it into a more walkable promenade.

Still, Gelber’s vision remains in flux. Although the measure garnered success with residents, the vote was a non-binding resolution. Miami Beach commissioners are now debating the contours of the law and which establishments will be exempt. Despite supporting the ban in November 2021, Commissioner Kristen Rosen Gonzalez wants to soften the measure by pushing back the last call time to 3 or 3:30 a.m. rather than 2. Gelber expects additional lawsuits.

Cars, after a nearly two-year hiatus meant to encourage outdoor activity amid the pandemic, returned to Ocean Drive in January. Some critics had argued that the lack of vehicles on the road had encouraged crowding.

A level of peace has already returned, according to some locals. Eddy Martinez — a luxury residential and retail broker who lives on a quiet section of Ocean Drive, just south of the entertainment district — avoided the street’s retail-heavy, northern portion during the height of the pandemic. But, to his pleasant surprise, the crowds are no longer so rowdy. He’s returned, walking his dog and riding his bike along the promenade at night.

While the broker supports Gelber’s mission of diversifying the neighborhood, he doesn’t want the street to lose its edge.

“Some want it to be more vanilla, but you can’t completely erase the entertainment component,” he said. “It’s Ocean Drive! You have to have bars, restaurants and lounges.”