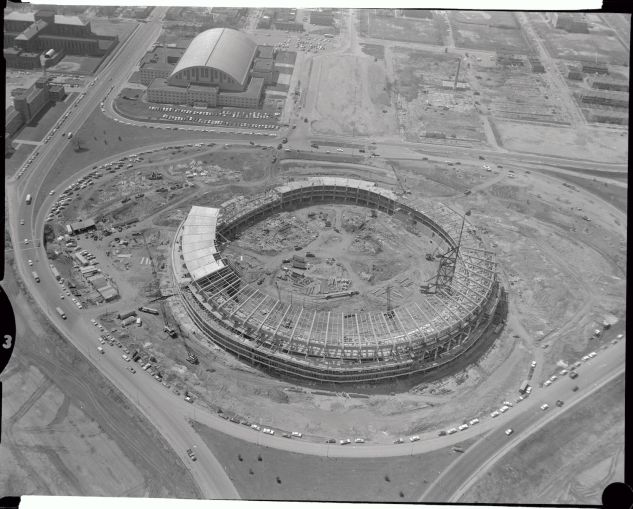 The Washington football team's last stadium was finished a couple of miles east of the U.S. Capitol in early 1961. It would be renamed for the late Robert F. Kennedy Sr. Photo: Bettmann / Contributor

After two seasons of going by The Washington Football Team, the NFL’s former Redskins announced it had adopted the Washington Commanders as its new name.

Now that the name is settled upon after a long rebranding process, Washington, D.C. Mayor Muriel Bowser is hoping to bring the team back to the District.

Although the Commanders are connected to D.C., the team actually plays at FedEx Field in Landover, Md., after playing at the defunct Robert F. Kennedy Memorial Stadium  in the District from 1961 through 1996.

Bowser has long been a proponent of bringing the franchise back and made her thoughts clear on Twitter Wednesday, saying that every other major sports franchise in the region calls D.C. home. This includes MLB’s Washington Nationals, NHL’s Washington Capitals and NBA’s Washington Wizards.

A 65,000-seat football stadium is among the possibilities that Events DC, the sports and entertainment arm of the D.C. government, has previously proposed.

Not everyone agrees with the mayor’s desire for a new stadium at the old RFK site. For instance, D.C. Councilmember Charles Allen responded to the tweet with his own thoughts on the matter.

“Regardless of a name change, building an NFL stadium at the RFK site would be a bad idea — for the taxpayers and for the residents,” he wrote. “We can do so much better for housing, jobs, parks and the Anacostia River.”

It’s no secret in NFL circles that the team’s co-owner, Daniel Snyder, has been looking for a new stadium deal as FedEx Field’s contract with the team is up in 2026. Interested parties from Northern Virginia, Maryland and D.C. are all working on proposals.

Last month, lawmakers in Northern Virginia introduced a bill to build a stadium and commercial complex in Loudon County to lure professional football — the Commanders, that is — to the commonwealth. Virginia Gov. Glenn Youngkin even alluded to the legislation when he addressed the General Assembly for the first time earlier this month.

Requests for comment from the owners of the Commanders were not immediately returned.