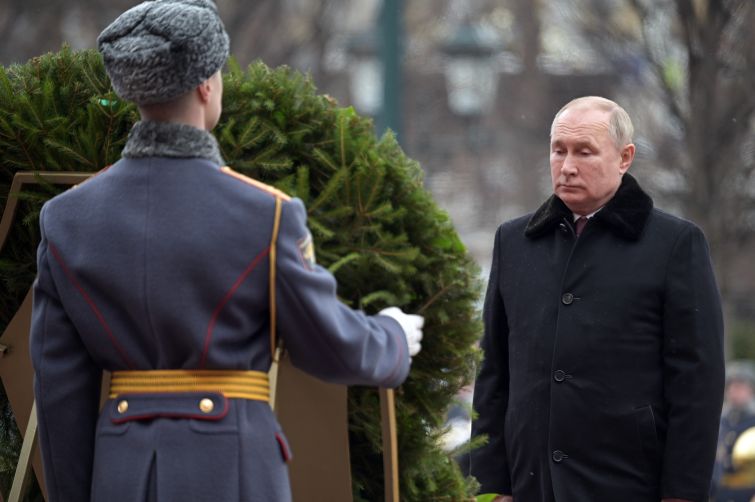 We’re sometimes a little cheeky in “Sunday Summary” as we give the rundown of the week’s commercial real estate news in a winking and (we hope) humorous way. But as we read the news this week we were not feeling very funny. Or glib. Or self-satisfied.

Rather, the emotions that we’re feeling this week are fear, sadness and shock.

It’s impossible for one’s heart not to break upon the realization that the most serious land war in many, many years is raging on the European continent. Lives are being extinguished. Territory is being seized. Treasure is being lost. The reasons for it are incomprehensible from where we sit.

And while it feels a little ridiculous to ponder the real estate implications of a war in Eastern Europe, one shouldn’t expect this to leave that world untouched.

There have been immediate consequences. For one, the Dow Jones Industrial Average plunged on Thursday morning, the first full day of fighting (recovering somewhat by afternoon) with commercial real estate stocks for companies like CBRE taking a hit.

But the stock market dip is not the biggest problem; commercial real estate has been impacted for the past two months by inflation and supply chain issues. The industry had already been girding itself for an ugly rate hike from the Fed; a protracted economic conflict with the third-largest oil producer and second-largest natural gas producer on earth is not something the industry particularly wants right now.

Granted, real estate is better hedged than many other industries for some of the supply chain problems that are headed our way; as Jonathan Morris pointed out to Commercial Observer, most real estate companies pre-order supplies, so any swing in prices might be irrelevant. But an inherently unstable situation like a war should make everyone sit up and take notice.

Everybody had kind of a terrible week

The multibillion-dollar company’s woes started with a shocking report in Insider that the firm’s workplace was a toxic hellscape. Employees were surveilled … at their home! Surprise inspections were held … at their home! Dress codes were enforced … over Zoom?!

Company CEO Andrew Florance lashed out at one of the reporters at Insider, Alex Nicoll, who broke the initial story (with CO alum Daniel Geiger) calling him a “fringe reporter” who wrote a “sensationalized story that grossly mischaracterizes the employee experience” and also singled out Nate Peterson, a former CoStar employee who has been leading the charge against the company on Instagram. CO reported that CoStar thereafter beefed up security around company headquarters.

That final move turned out to be a prescient one because the next day two cars were set on fire in the firm’s Richmond, Va. parking lot! A suspect (not Peterson, it should be noted) was arrested.

Maybe there’s just a lot of acrimony in the air. This week, Bloomberg Wealth reported that Goldman Sachs is apparently trying to claw back bonuses from executives who leave the company for a different job, in the form of confiscating vested stock — a tactic normally reserved for employees who commit serious breaches of conduct. (We hope other firms reading this don’t get any ideas!)

The city seized 1214 Dean Street in Crown Heights, Brooklyn after the attorney general’s office settled with the “eco-yogi slumlords,” Gennaro Brooks-Church and Loretta Gendville, when an investigation found they evicted tenants during the eviction moratorium and ran a short-term lease racket over Airbnb. Brooks-Church and Gendville also received a hefty $225,000 fine.

And Crain’s New York Business reported that Joseph Chetrit decided to go to court against JDS’ Michael Stern, claiming Stern owed him $20 million on the deal that they had been involved with for 9 DeKalb Avenue, the supertall tower in Brooklyn. Stern apparently bought Chetrit out of his share of the building in 2018 but paid him only $10 million of the $24.4 million owed.

Of course there is. Everybody’s favorite coworking guru, Adam Neumann, landed a $108 million construction loan from CIM Group, to build the second phase of Caoba, a multifamily tower in Miami.

It looks like there’s good news for Gary Barnett. The Extell head is buying the final portion of the former Walt Disney Company-owned ABC campus on the Upper West Side from Silverstein Properties and Seven Valleys for between $925 million and $930 million.

And after years of writing off Albany as a hopeless swamp where good legislation goes to die, it feels as if there’s a very welcome change in the air. Without the shadow of Andrew Cuomo (don’t forget his nickname, “the prince of darkness”!) and some of the other unsavory characters who have departed the scene, the town is breathing much, much easier.

“It was like there was a total change in the behavior and mindset of people who worked for the government. There was a universal sigh of relief,” Manhattan State Sen. Liz Krueger told CO. “I remember walking through the Capitol and thinking, ‘Oh, we all had Stockholm syndrome and we didn’t even realize it.’”

It could be argued that Neumann is the most flamboyant name in real estate in 2022 but back in the day that title might have belonged to Douglas Elliman broker Michael Shvo.

He was the guy who was getting John Legend to perform at real estate parties as well as turning his condo openings into elaborate pastoral scenes/art exhibits.

Shvo has been a little more muted in his antics in recent years, but much more focused in terms of accumulating a massive multibillion-dollar commercial real estate empire which includes serious pieces of property like the Transamerica Pyramid in San Francisco and the Coca-Cola Building on Fifth Avenue.

One of the places that Shvo is looking (although this didn’t make it into CO’s interview) is Downtown Los Angeles; and he might be too shrewd to do this.

Despite the fact that Downtown L.A. is littered with vacancy signs on its retail, the homeless problem has only gotten worse, and the fact that L.A. businesses have not yet convinced its employees to come back to the office in anything approaching pre-2020 numbers, Downtown L.A. actually has quite a bit going for it. It’s primed for a slew of new residential buildings and aside from the office vacancy there’s been a surge of population growth.

It’s a good balm to take one’s mind off the problems of the Ukraine — along with, perhaps, a steak to be followed by a Netflix binge.

Until next week: Peace.