In Few Short Months, Hochul Has Tossed Out Decade of Andrew Cuomo’s Baggage

What that means for real estate's top priorities. 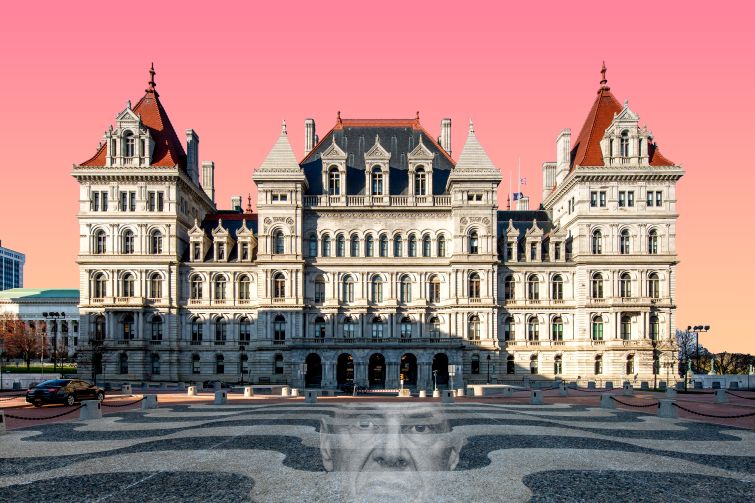 When Gov. Andrew Cuomo announced he would resign last summer after an escalating series of sexual harassment allegations, the mood around Albany changed immediately.

Suddenly life at the Capitol without the nearly omnipotent dynast, whom lawmakers dubbed the “prince of darkness” for his cloak-and-dagger political moves, seemed possible. Public sector workers who had become used to experiencing the executive chamber’s wrath as a daily feature of state operations didn’t know what to do with themselves.

“It was like there was a total change in the behavior and mindset of people who worked for the government. There was a universal sigh of relief,” Manhattan State Sen. Liz Krueger said. “I remember walking through the Capitol and thinking, ‘Oh, we all had Stockholm syndrome and we didn’t even realize it.’”

The Queens Democrat had towered over nearly every major decision affecting state governance and politics for more than a decade. Cuomo had the first and final say over hundreds of thousands of budgetary allocations, dangling threats to cut one program’s funding in exchange for another bill’s passage in his negotiations with legislative leaders. He rammed through multibillion-dollar infrastructure projects that ran in opposition to experts within his own agencies and local residents.

Cuomo was an effective leader when he focused his energy on specific projects, some political and real estate leaders conceded. But that single-mindedness came at a cost. And the day-to-day experience of negotiating with the governor was often miserable and exhausting.

“There was a culture of fear and scorekeeping,” Manhattan Assembly member Linda Rosenthal said. “It’s good not to feel oppressed by that, which I think many people did feel.”

Cuomo’s successor, Kathy Hochul, promised she would bring a more collaborative approach to governing. In the six months since she was sworn in, lawmakers and stakeholders found their calls were being returned more quickly and no one was monitoring the messages.

“Anyone who dealt with the Cuomo administration was always worried about retaliation,” Jeff Gural, chairman of GFP Real Estate, said. “You always had the feeling if you’re going to call somebody they needed the governor’s permission to call you back and that doesn’t exist any longer.”

Cuomo famously nursed a petty feud with New York Mayor Bill de Blasio for years and privately threatened lawmakers who challenged him. His aides bullied legislators and journalists over social media on his behalf. Hochul meanwhile has so far avoided personal attacks. She also hired a slew of competent bureaucrats with extensive ties to New York City to fill open roles in her administration.

“The vibe of her and her people is 180 degrees different from Cuomo and his people. They aren’t bullying you. They aren’t threatening you. They’re congenial,” another developer told CO. “The Hochul people are less aggressive but sometimes you catch more flies with honey than vinegar.”

She’s begun inviting state legislators to the governor’s mansion, hosting the Bronx and Westchester delegations earlier in February. There is a catch, though: Republicans, who do not control either chamber of the legislature, have felt slighted.

“All of my colleagues would absolutely welcome the opportunity to sit down with her and talk about issues impacting our districts and our communities,” Rockland County Assembly member Michael Lawler said. “The fact that she has not reached out to Republicans is unfortunate.”

Her leadership style has paid off in other ways. Hochul has hauled in $21 million for her reelection campaign and is well in front of her Democratic primary opponents Tom Suozzi and Jumaane Williams (two other rivals, Letitia James and de Blasio, have already dropped out). On Feb. 17, Hochul received the state Democratic Party’s official endorsement for the governor’s race, anointing her as the new leader of the party.

“She’s trying very hard, she’s very smart, she wants to do the right thing for the right reasons,” Democratic Manhattan Assembly member Daniel O’Donnell said. “There’s been an absolute separation between the government and the campaign, which is refreshing. Under Cuomo there was no distinction. None. It was a personality cult of a narcissist.”

Thanks to the state constitution and a series of landmark court decisions New York governors have unparalleled authority to craft the state budget how they see fit.

As governor, Cuomo wielded budget bills he introduced as a cudgel against the legislature. He was fanatical about passing budgets on time while curbing spending — an issue on which he would often campaign — which led to bruising negotiations with lawmakers over which programs would stay and which would get sacrificed. That often included small but significant allocations to nonprofit groups dependent on state grants for survival.

This year there has been less arbitrary cutting by the governor’s office. Witnesses at budget hearings are telling lawmakers this is “the best budget we’ve ever seen.”

“Cuomo would kill all our budget asks and then make us buy them back, which would make the legislature have less influence over the rest of the pot,” Brooklyn Assembly member Jo Anne Simon said. “Hochul is not cutting things for kicks. That has made people feel it’s a new world.”

Hochul went a step further by signing a slew of bills that required some amount of funding over the fall and found funding for them in her budget proposals. In previous years, Cuomo would veto those bills and force lawmakers to find the money, thus spurring a tense budget dance for weeks until its April 1 deadline.

“Instead of vetoing a bill and saying, ‘It’s up to you to try to find money in the budget next year,’ she signed the bill and proposed funding them in her budget,” said Manhattan Assembly member Dick Gottfried, who chairs the chamber’s health committee. “She consults, she talks, she’s agreeable. On the substance, the budget she submitted is much more progressive than anything Gov. Cuomo ever submitted, certainly on health care.”

Cuomo often slashed programs designed to help the state’s most vulnerable residents. Medicaid, supportive housing programs and aid for the homeless were frequent targets. He justified the reductions, claiming the state needed to trim costs when it faced growing budget deficits.

But a flood of federal pandemic assistance as well as more abundant tax revenues collected as the economy rebounded and higher tax rates kicked in have given Hochul more wiggle room. She prepared a balanced budget and set aside $16 billion over the next five years.

“It is in everyone’s interest for this to be an on-time budget and it’s easier to do a budget when there’s money than when there’s not,” said Jonathan Bing, a former assembly member and now an attorney with Greenberg Traurig. “The state comptroller gave a glowing report on her budget, which is not necessarily what Tom [DiNapoli, the comptroller since 2007] had issued in the past.”

Governors have used the budget process as an opportunity to adopt new policies.

Sometimes the new laws don’t actually cost anything but since the budget must be finalized by April 1, governors use their leverage to add policies legislators may be less than thrilled about passing.

In recent years, Cuomo raised the minimum wage to $15 an hour, added a congestion pricing program and legalized recreational marijuana. In one instance he gave himself the power to eject members from the Public Authorities Control Board after some opposed Amazon’s ill-fated Long Island City, Queens, headquarters.

Hochul’s $216 billion budget proposal included a number of goodies the real estate community is tracking closely, led by the renewal of a property tax abatement that spurred affordable housing development, the repeal of a cap on residential density in the city, the passage of good cause eviction legislation, and a statewide zoning change that would permit the conversion of basements and garages into additional residential units.

Not all of those plans will remain in the final budget as they are currently written and some may get scrapped altogether. Hochul revised the tax abatement — commonly known as 421a — which developers say would still allow them to build mixed-income housing in high-rent neighborhoods. But some progressive lawmakers want to allow 421a to expire this summer and start anew.

“There needs to be serious discussion about property tax credits and exemptions and this should not be done within the budget,” Krueger, the Senate Finance Committee chairperson, said. “If it sunsets I think it’s fine. We have plenty of time to reevaluate with the city and City Council and control what is the best path forward. This is city tax money, not state tax money.”

Hochul’s proposals that would enable denser residential living in New York City and its suburbs are also drawing scrutiny. Some Democrats want to keep the cap on the city’s residential floor area ratio, which essentially prevents the city from allowing developers to build a high-rise more than 12 times the size of the lot on which it would be located.

“I have no quarrel with somebody who wants to have an ADU or own an apartment building or develop multifamily housing. Local municipalities should be in control of that,” Lawler, the Rockland County assembly member, said.

Without any public rancor, Hochul pulled the bulk of the idea from her proposed budget late last week, leaving in place a plan to bring existing New York City ADUs into safety compliance.

Cuomo relished cementing his legacy as a Robert Moses-like master builder who would steamroll local leaders if he could complete an infrastructure project more quickly.

His multibillion-dollar rehabilitation plans at LaGuardia and John F. Kennedy airports were among the most ambitious efforts of his tenure but the governor’s single-minded efforts to find a faster way to renovate the Canarsie Tunnel between Manhattan and Brooklyn burned out transit leaders. His micromanagement of the Moynihan Train Hall and the resulting pressure to meet an expedited deadline reportedly contributed to its project manager taking his own life

Hochul has brought her collaborative style to infrastructure, too, halting her predecessor’s unpopular LaGuardia AirTrain proposal in order to reassess transportation to that airport while embracing a new transit line between Brooklyn and Queens that planning experts and officials had pushed for years.

“In each case she saw there was an opportunity to do something better and take her own approach,” said Travis Terry, president of the municipal lobbying firm Capalino. “A lot of it is listening to communities and trying to understand the best way to advance something within her larger picture of priorities in running the state.”

That doesn’t mean Hochul will seek to reverse everything Cuomo has done. Her plans to redevelop Penn Station and its surrounding neighborhood are prioritizing an overhaul of the transit hub but are largely following the prior administration’s outline, which features 18 million square feet of construction despite high vacancy rates for office space.

“Some of the Penn Station plans from her predecessor are still in play and appear to be moving ahead despite community opposition,” said Rose Christ, a senior principal of law firm Cozen O’Connor’s public strategies group. “I think she’s much more apt to look for paths of less resistance.”