The neighborhood’s been in turnaround mode for decades now, and the pandemic didn’t help things. But a residential development boom might just cap a comeback. 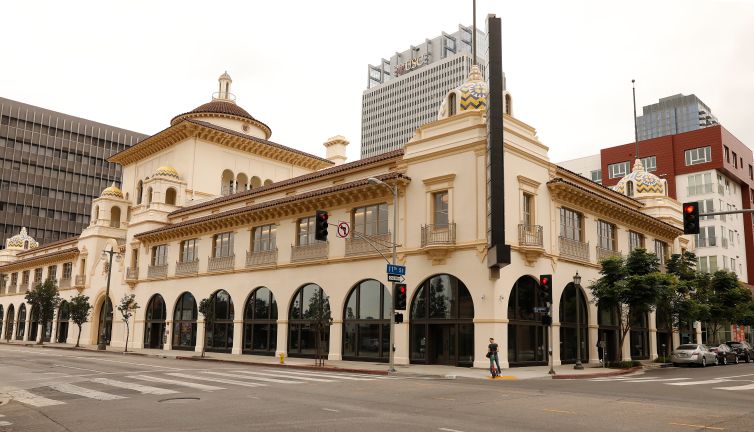 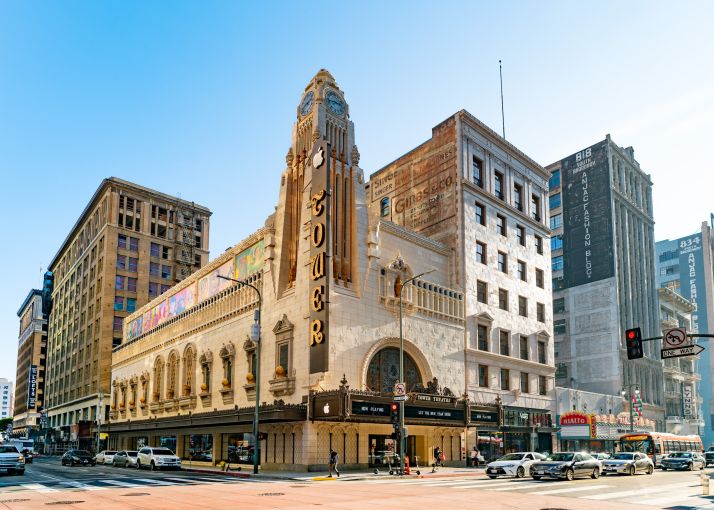 The pandemic-era emptying out of city cores hit few places as hard as Downtown Los Angeles.

Bordered, in fitting Southern California fashion, by a ring of highways and a cement-lined river, it’s often been poorly defined in a decentralized city, lacking the pull, pizzazz and presence of other neighborhoods. And COVID-19 office abandonment heavily impacted DTLA high-rises. In the third quarter of 2021, per the Downtown Center Business Improvement District (BID), office vacancy hit 19.6 percent, while a recent Savills report found nearly 30 percent of the neighborhood’s office space available for lease, with leasing activity in the city as a whole a third below pre-pandemic levels.

But the recent emptying out of the city core may, over the long-term, register as a stumble.

Downtown L.A., in the midst of a multi-decade turnaround, may best be seen as a neighborhood in adolescence; as architect Joseph Giovannini put it in late 2020, there’s a promise in the current vision of downtown’s growth of “living without a car in a vertical Los Angeles.” And the acceleration of secular trends and large-scale investment shows this ongoing rebirth just might position DTLA for what’s next.

“Downtown is bouncing out of the pandemic a lot faster than we thought,” said Laurie Lustig-Bower, an executive vice president at brokerage CBRE.

Over the last two decades, a number of trends and city policies — an Adaptive Reuse Ordinance that has rapidly, and affordably, restored pockets of faded buildings and historic theaters to new luster, the arrival of cultural hubs like Disney Hall and The Broad museum, the buildup of the Arts District, and a residential and restaurant renaissance — have turned the workaday blandness of law firms and government offices into an emerging and vibrant lifestyle center.

Attracted in part by these shifts, Downtown L.A.’s population has grown to more than 80,000 today from 20,000 in 1999. That’s been both a saving grace during the lean years of lockdowns, and the potential engine of a post-COVID world favoring creative office space, walkability and density.

A slate of new and nearly finished megadevelopments seek to restore the velocity lost during the last few years. Denver-based Continuum Partners, which has worked on a handful of office and other developments downtown, is pursuing a $2 billion mixed-use project called Fourth & Central in the Arts District, seeking to replace a cold storage facility with a 10-building development near rail lines and riverfront redevelopment.

“We can create our own little neighborhood there,” Continuum CEO Mark Falcone said. “That’s very unusual.”

What if, during the next phase of downtown development, as hybrid work makes traditional office strategies a thing of the past, such residential growth — not commercial — is what matters?

“Pre-pandemic, Downtown L.A. was beginning to show a new regime for success, and the residential mass to have the feeling of urban American in L.A.,” said Stuart Gabriel, director of the Ziman Center for Real Estate at The University of California, Los Angeles. “Downtown has great potential.”

Perhaps best known as a nightlife hub during its early 20th century golden era, Los Angeles’ downtown is really a group of neighborhoods, including the Arts District, Chinatown, Little Tokyo and Bunker Hill, a former collection of Victorian homes demolished mid-20th century for office towers. Like so many other downtowns, DTLA suffered greatly from the loss of employment opportunities and disinvestment due to urban flight and suburbanization in the 1960s and 1970s, but was relatively slow to capitalize on the return-to-cities movement.

It took the Adaptive Reuse Ordinance, passed by the City Council in 1999, to truly kick off the area’s modern redevelopment. It incentivized developers to turn the underutilized remnants of earlier eras into a new generation of more human-scale, walkable stores, hotels and apartments. The stunning $80 million rehabilitation of architect Julia Morgan’s Herald Examiner Building last year exemplifies such redevelopment, transforming an historic, underutilized gem into a new home for Arizona State University.

“This isn’t a blank city of empty lots with no there, there; it’s not some generic place. It’s not Houston,” said Nick Griffin, executive director of the Downtown Center BID.

Continuum’s Falcone said the firm was attracted to L.A. as the third-largest urban economy, measured by gross domestic product, or GDP, in the world, while it still has an underdeveloped center core.

“Downtown L.A. is going to benefit from the fact that it’s quite late to the densification and evolution of its core,” he said. As lower-density opportunities in the Valley and Inland Empire have been consumed, it’s obvious L.A. will have to densify, and the places you can go are near high-velocity transit.”

Going forward, downtown has and will benefit from the city’s renewed investment in subway and light rail with forthcoming infrastructure upgrades, like the 1.9-mile, $1.75 billion Regional Connector, a new underground rail line that will link three Metro lines downtown. Between the $120 billion Measure M transit investment that L.A. County voters passed in 2016, and high-profile goals aligned with the city’s hosting of the 2028 Summer Olympics, downtown stands to benefit from more transit accessibility.

With that, the thinking goes, there will come more desire for high-rise apartment and office buildings, which can more easily sprout from downtown’s surfeit of surface parking lots, or emerge from restored and rebuilt high-rises and Art Deco buildings. Related Companies’ research found that within a 10-mile radius of The Grand LA lived a population of 3.6 million people, 25 percent of whom live in a household making over $100,000 a year.

“The natural growth downtown has provided a sustained increase in population,” said Rick Vogel, a senior vice president at Related. “It’s part of a demographic shift in mindset and where people wanted to live, especially young adults.”

The residential population resurgence, for many downtown boosters, is a more important metric of downtown’s health than the office market. At certain points during COVID, two months of free rent and parking was a given, said CBRE’s Lustig-Bower, as landlords struggled to fill apartments and rents plunged 11 percent. In recent months, a resurgence in demand for housing has made such concessions often unnecessary, she said, and fueled a recovery in rents (though still below other pricey L.A. neighborhoods). The Downtown Center BID found apartment occupancy jumped year over year, to 93.6 percent in the third quarter of 2021 from 85.2 percent in 2020.

“When the district’s 400,000 office workers weren’t here, we found that the residential population was enough to keep things afloat,” Griffin from the BID said.

He said the residential explosion in the last decade makes DTLA the L.A. equivalent of Lower Manhattan, which famously evolved into a live-work-play neighborhood following 9/11 and the recession of the early 2000s.

“That was our first glimmer that it was a more substantive factor than we’d realized,” Griffin said. “And when it came roaring back, in terms of occupancy, that made us realize it’s a critical mass that’s strong and growing.”

In 2022 alone, 4,300 new units of housing will begin construction in L.A. via adaptive reuse projects, per a study by RentCafe, most clustered downtown. DTLA projects, too, will make up over 20 percent of the city’s residential growth over the next two decades, with the area likely hitting 200,000 residents by 2040. With pervasive housing shortages across L.A. and California more broadly, downtown is where the supply is, said Griffin, and where it can be delivered at scale. It’s where it’s being accelerated, with projects such as 755 Figueroa (by Brookfield), 8th & Figueroa (from Mitsui Fudosan America) and 520 Mateo (courtesy of Carmel Partners).

“We do believe downtown has recovered, except for office occupancy, and it’s the residential growth that will be the primary growth driver,” Related’s Vogel said. “Office demand will always be an important part of the economy, but people have many other reasons to come downtown. Pre-pandemic, office growth wasn’t the underlying demand generator.”

The answer to the remote work question will have particular relevance to DTLA, which is staking part of its future growth on being a more diverse commercial hub, able to offer more architecturally unique, restored office space, better transit access and even closeness to manufacturing — all with rents roughly a third less than competing spaces in West L.A.

The idea that a grittier, edgier downtown, and its younger residents, can attract tech, entertainment and arts clients — as opposed to areas on the city’s Westside like Culver City, Santa Monica or El Segundo — was bolstered when Adidas signed a 107,000-square-foot lease in Brookfield’s city block-sized California Market Center redevelopment this January, closely followed by Forever 21, which committed to moving its headquarters to the downtown project, which reopened in 2021 after closing due to extensive renovations.

The idea found further validation in Silverstein Properties’ $430 million purchase in 2020 of the 1.4 million-square-foot U.S. Bank Tower. The development firm is best known for its transformative work in Lower Manhattan, where it rebuilt much of the World Trade Center. Silverstein announced last summer it would drop an additional $60 million to overhaul the supertall tower to include more campus-like amenities and spaces. Finally, this year, developer BEP Helix bought the leasehold on the 280,000-square-foot Park DTLA office park with plans to convert it into lab space; and startup Emcee broached plans to redevelop the 1.1 million-square-foot Broadway Trade Center into a tech hub, including for its work on the metaverse.

Of course, part of the lifestyle question, and experience of downtown, includes the tragedy of unhoused Angelenos, whose population and struggle have only become more pronounced during the pandemic. The 2020 Greater Los Angeles Homeless Count found 66,000 homeless in L.A. County, up 12.7 percent from the previous year, and almost certain to be higher now. While the issue has galvanized Angelenos and will be a central focus of the upcoming mayoral election, many of those interviewed for this story suggested that the homlessness issue, though serious, is already so entrenched that it’s effectively baked into the area’s prospects. It has yet to impede growth, that is, and is unlikely to do so in the future, they said.

The evaluations of downtown aren’t uniformly positive, either. Pre-pandemic, office rents weren’t all that robust since so many new buildings came online at the same time. And Moody’s analysts, in a recent report, had a pretty conservative view of pre-COVID, noting that the office market was one of the most oversupplied in the nation.

Despite the narrative of an influx of flashy new tech tenants, the reality is, per CBRE, that legal and financial firms are still the “main tenant” for downtown, accounting for 56 percent of DTLA office leases in 2021, and Avison Young found retail leasing activity in the area was down 42.1 percent between September 2019 and 2021 (hence quite a few “For Rent” signs in ground-floor windows).

But the current angst over downtown’s future can’t erase the massive change that’s swept over it in the last two decades. DTLA, like so many central business districts, has no idea where the story goes. Now, though, at least it has a much more compelling story to tell.

“Decades ago, it wasn’t just that downtown was suffering the ills that every downtown in the U.S. was suffering, but downtown was also in a troubled, unattractive metro area,” Gabriel said. “L.A. was smoggy, challenged by racial conflict and a myriad of other factors. It was completely unattractive. L.A. today is an exciting global city.”