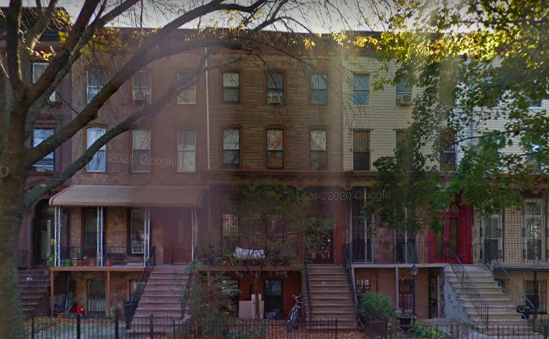 These landlords are getting evicted.

New York City and state Attorney General Letitia James seized a Brooklyn building through a settlement with the so-called “eco-yogi slumlords” after an investigation found they illegally evicted tenants during the pandemic eviction moratorium and ran a short-term lease racket over Airbnb.

Through the settlement negotiations with the owners, the city will operate 1214 Dean Street in Crown Heights, assessed at $2 million, and use it for permanent affordable housing. The former owners, Gennaro Brooks-Church and Loretta Gendville, were also hit with $225,000 in penalties.

“During a period of unprecedented global struggle, Brooks-Church and Gendville callously forced New Yorkers from their homes,” James said in a statement. “We have long seen these types of harmful housing scams, especially in central Brooklyn, where people make a business out of unfairly and inhumanely pushing others out of their homes. Let this serve as a warning: Any landlord who mistreats and tries to unlawfully evict renters will face the full force of my office and the law.”

After the state enacted an eviction moratorium in March 2020, Brooks-Church — who has described himself as an “eco-builder” that creates “living walls” — and Gendville — who owns a vegan café and a chain of yoga studios in Brooklyn — allegedly forced an unknown number of tenants out of their apartments starting in July 2020, according to James. In order to circumvent the eviction ban, authorities said the landlords did not go through proper channels, and instead resorted to “self-help evictions,” also known as lockouts, whereby they removed tenants belongings from the space and refused to provide new keys.

“These landlords may have been sending a loving and peaceful message out publicly, but they were kicking tenants to the curb privately,” Adams said in a statement. “Safe, affordable housing is not only vital to the city’s survival and public safety, but is a basic human right, which is why my administration will never hesitate to stand up for tenants who are illegally harmed.”

Aside from the illegal evictions, the two were able to generate $1.4 million in revenue since 2016 by placing 83 different listings on Airbnb, ultimately serving 5,600 guests in 14 homes across nine Brooklyn buildings.

In addition to handing over the keys, Brooks-Church and Gendville have to make two separate payments of $125,000 to the city and the attorney general’s office.

The city became aware of the lockouts on July 7, 2020 and three days later the New York City Law Department sent a cease-and-desist letter to the landlords and the investigation ensued.

An attorney for Brooks-Church and Gendville could not immediately be reached for comment.