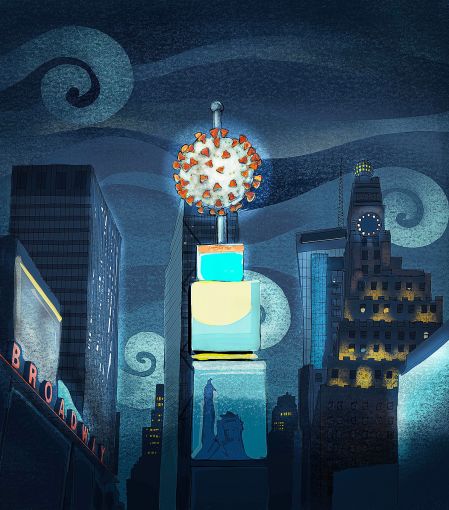 We finally waved goodbye to 2021, our second year struggling through a global pandemic.

While 2021 was definitely a marked improvement over 2020 — we had vaccines and booster shots that let us, albeit briefly, return to some semblance of normalcy — we’re still not out of the woods yet.

The omicron variant of COVID-19 has surged, bringing record high daily counts and forcing many companies to delay their long-awaited return-to-office. Apple has temporarily banned in-person shopping at its 11 New York City retail shops, opting instead to allow customers to pick up online orders outside the stores, because of the rise in cases.

Banking giant Goldman Sachs, however, is trying to keep its employees in the office with a new Feb. 1 deadline for eligible staffers to get their vaccination booster shots.

Omicron has the potential to further disrupt the city’s already reeling tourism industry by keeping visitors away from the Big Apple. Meanwhile, the Hotel Association of New York City fears property taxes could exacerbate the sector’s problems, and in a report found those taxes amounted to 30 percent of hotel revenue in 2020, an increase from the 9.4 percent they comprised in 2019.

Speaking of ups and downs, the office market in Washington, D.C., experienced something of a roller coaster ride in 2021, with occupancy levels remaining relatively low at 10 to 30 percent, but still saw deals getting signed.

It wasn’t all bad news

Despite some of us striking a dour tone, 2021 wasn’t all bad news. There were plenty of deals to raise a glass to.

Commercial Observer rounded up the top office leases in both Florida and D.C. for some joyous reading to kick off the new year, along with the largest multifamily deals in South Florida.

And, even as real estate firms were getting ready to celebrate the ball drop, they still made sure to put ink to paper for some last-minute 2021 deals.

The Durst Organization landed a $127.5 million refinancing for its newly constructed multifamily complex in Astoria, Queens, 10 Hallets Point, from Signature Bank. And Taconic Partners and Nuveen Real Estate ventured to the land of Bruce Springsteen and the Jersey Devil to pick up a warehouse and distribution facility at 1 Cory Road in Morristown, N.J., in a $55 million all-cash purchase. It marked Taconic’s first foray into the industrial sector.

Turning our attention to warmer climates, Manhattan jeweler Mish Tworkowski closed his longtime Bond Street shop to make a move to ritzy Palm Beach, Fla. And a Los Angeles court ruled in favor of the city’s Exposition Corridor Transit Neighborhood Plan that would allow about 6,000 new multifamily and condominium units along the Metro Expo Line on L.A.’s Westside.

What better way to get over the New Year hangovers than hearing from some of the experts in the field?

CO’s got you covered in that respect. Steve Giralt, the CEO and co-founder of production company The Garage, dished about why he and other creative tenants have flocked to Industry City in Sunset Park, Brooklyn, while Chris Burnham, principal of brokerage KLNB, talked about the state of retail in the nation’s capital region last year.