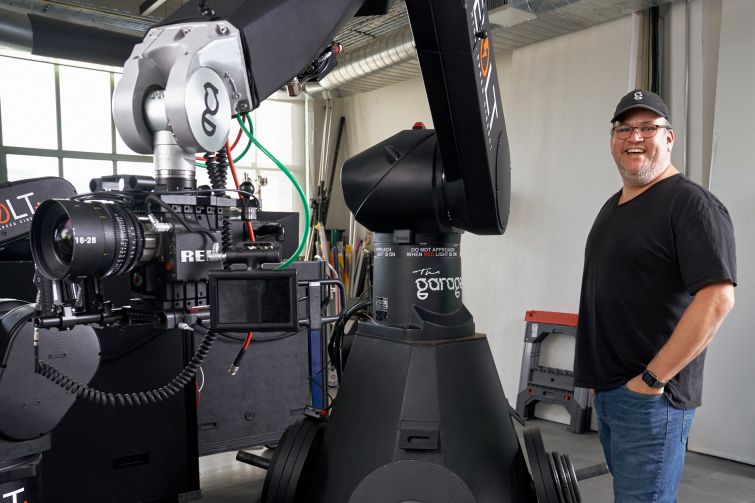 Steve Giralt in the Industry City office of The Garage. Photo: Stephanie Price for Commercial Observer

By now, Brooklyn’s Industry City is no longer novel. It’s as much a part of New York City as the Empire State Building  — or at least close.

Like other parts of the city that once seemed edgy and risky, like hip Williamsburg, Brooklyn, and startup hub Dumbo, Brooklyn, Industry City in Sunset Park, Brooklyn, for decades just the rusting hulks of industrial buildings that go back to the pre-1960s days, when Brooklyn was a drop-off point for freight shipped from all over the world, the novelty of Industry City and its new-millennium revival has long ago lost its revived-building smell. It’s just a place in New York City where if you got an oddball idea for a sophisticated tech-aided product or service, Industry City is likely to have room for you.

One of those firms is The Garage, which in late 2020 leased a 14,600-square-foot studio in Building 6 (at 34th Street) where restaurant chains you have heard of, like Domino’s and Buffalo Wild Wings, come to make sure their food looks as delectable as it can be in TV commercials. Sometimes they will come up with paper that’s extra clingy so the chicken fingers go by in a certain photogenic way; other times the paper will be extra bouncy so the cola drops look extra delicious as they jump and land. (Yes, they use real food.)

If you’ve seen the Domino’s “Surprise Frees” ad campaign and thought how tasty the cheesy bread looked, or swooned when the knife cut through the Buffalo Wild Wings chicken sandwich, you’ve seen The Garage’s handiwork.

The CEO and co-founder of the production company, Steve Giralt, oversees the robot-driven domain with the help of two dogs — a dachshund and a Labrador-pitbull-dalmation-hound mix. You are greeted at the door by a robot arm, which was a first-time for this reporter.

Giralt took a few minutes in mid-December to sit down and respond to some questions from Commercial Observer. His responses have been edited for clarity and length.

Commercial Observer: How long have you guys been around?

Under the name The Garage it’s been two years now. Before that, for 19 years, I was a still photographer, and then I [personally] transitioned into video about five years ago. Then, two years ago, we rebranded the company from Steve Giralt Photography. We still do some still photography, but the bulk of the work we do is video.

Walk me through the history of the company, and its origin story.

The origin of it was me starting as a photographer, and wanting it to be about more than just me. I wanted it to be about creating a company that is dedicated to innovating the way we tell stories in commercials — specifically, it’s not just about me, it’s about empowering other artists to make amazing commercials for clients and truly question the way the industry has done things.

We call it The Garage because it’s the place where you play around, and you can make a mess and you can experiment without worrying about anything negative. Who cares if you made a mess? We make a lot of messes in The Garage.

Before, we were in Manhattan for 16 years or whatever it was. We were on 36th [Street], between Eighth and Ninth avenues — a space about a quarter the size of this. It [was] kind of like the Garment District-meets-Hell’s Kitchen area. The building we were in was kind of a mix of garment people, architects, creatives, people who did photography, you name it; a real mishmash.

Why are you based in Industry City? What was the appeal? (The company moved to the complex in February 2021.)

First, we looked around for a little bit, and we needed to leave Manhattan more for financial reasons than for the kind of space we needed — a bigger, more industrial space, with huge freight elevators and loading docks. We pressed really hard to find that in Manhattan.

But we also didn’t want our clients to feel like they are in the middle of nowhere. The appeal of Industry City is the culture that they really built here, around food and alcohol, you name it. It’s a really entertaining place. For our client team, it’s almost like getting a Google campus-type feel without having to pay for the Google campus, because you have all the food and the courtyards and the ice-skating rink — I really love the culture they are trying to build here — and filmmaking as well.

So the culture they are trying to build around filmmaking and cinema here at Industry City was really a draw. The biggest comparison we made was the Brooklyn Navy Yard, and they had all that stuff but it didn’t have that culture that Industry City has.

Is it your intent to always stay here? To stay the size you are?

We might grow; that’s a possibility. That’s part of the reason we came to Industry City, was that they have 6 million square feet. So, if we need a storage space, or maybe we will need more space for the robots — we like the fact that there’s so much space here — so that if we need additional space, it’s easy enough to come by.

My dream is that Jetson [a company that makes scooters, hoverboards and bikes that shares the fourth floor of Building 6 with The Garage] moves out one day and we pierce that wall. But we signed a 10-year lease here, so we’re not going anywhere soon.

What are you paying?

I don’t know if I’m allowed to tell you that, according to my lease.

What is Industry City — a partnership between Jamestown, Belvedere Capital and Angelo Gordon, all private real estate companies —  like as a landlord?

At least my experience with Industry City has been, they’re very passionate about having the right kind of people in their space. The food hall is very curated; they designed the pieces that want to be part of this community.

How many people do you guys employ and where are they from?

We have six, and then depending on the production we can hire up to 50 people on a single day. So it’s a lot of temporary employees, freelancers. With 15,000 square feet for just six people, we’re very spacious when we’re not in production.

We finished one last week and we’re done for the rest of the year. On average, we probably shoot 50 days a year, full-on productions.

We all live in Brooklyn, all six of us. We have a few people, some stylists, that come from [New] Jersey, and some from Queens. I live right by the Brooklyn Academy of Music, so it’s a very easy commute for me.

What is the competition like between what you do and the companies that do CGI [computer generated imagery — a highly sophisticated form of animation]?

There’s many a Reddit about this — why do it for real when you can do it CGI? There are a couple of reasons: First of all, with food and beverage specifically, there’s an appetite appeal that is most often lost in computer-generated work. To try to make it look really real, and to trigger in everybody’s mind what tasty food looks like, to do it in CGI is very hard.

Doing beverage work in CGI is also incredibly challenging. You have to do what is called fluid simulations, which is really painful to do, and it requires a lot of rendering time. A quick CGI takes about a month to do really well. For us, you call us and we can shoot tomorrow. And they can have the spot up [on TV] the day after. There’s a speed we can do that CGI can’t do. That’s not to say that’s not going to change.

You can record music digitally, and you can also perform it live, and it will have a different feeling and sound. To me that’s the same thing between shooting something optically for real into a camera versus computer-generating it. It’s a different medium in so many ways.

But we also do CGI integration, so we are doing some things on camera, and some things CGI. And we have to work together to do that. We recently did something here at Industry City with Buck TV, which is a computer animation and ad agency based here, where we did a Planters peanut ad. They did the Mr. Peanut stuff all in animation, and we did the nuts flying around. So it’s a great example of how we’re most powerful when we work together.

We’re friends. We’re talking about another project in January with another brand. And we work really fast. We did some stuff for Pepsi with them: the cans were CGI, while the liquid they wanted for real.

There’s a time and a place for each one. It’s good.

New year, new you: Sign up for Commercial Observer’s newsletters.