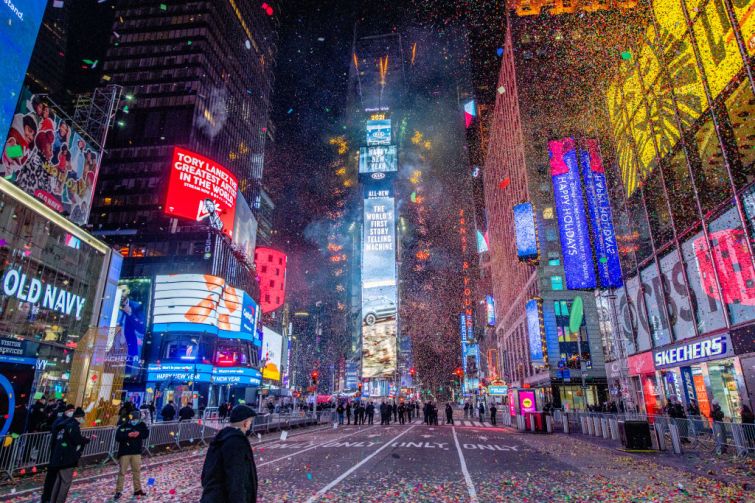 A view of the Ball Drop on the One Times Square building during the 2021 Times Square New Year's Eve Celebration on Dec. 31, 2020 in New York City. Photo: Rochlin/Getty Images

New York City dwellers are getting the worst kind of déjà vu as coronavirus cases skyrocket to record high daily counts. While Mayor Bill de Blasio has said he hopes to avoid the shutdowns of last winter, the uptick in cases — in large part due to the omicron variant — has already hurt local businesses relying on holiday tourism, a big part of the city’s $80 billion tourism industry.

The restaurant industry has been hit particularly hard by the initial wave of cases — at least a dozen eateries in Brooklyn and the Bronx have closed in December either due to staffing shortages or because some of their own staff had contracted the coronavirus. Meanwhile, leaders in the hotel industry are concerned about how the surge could impact international and domestic tourism ahead of New Year’s Eve — and the fate of the iconic ball drop remains up in the air.

“There’s just huge concern, uncertainty and fear,” Andrew Rigie, president of the New York City Hospitality Alliance, which represents restaurant owners in the city, told Commercial Observer. “We were finally on a positive route towards a long road to recovery, and this new spike in COVID cases is yet another gut punch.”

Daily positive cases for New York City shot up above 5,000 on Dec. 14, rising to 9,471 on Dec. 18, and hit a four-day record-high streak on Monday. The hardest-hit areas are in parts of Lower Manhattan, Staten Island and Brooklyn, which are finding that more than 10 percent of people getting tested for the virus get a positive result, according to city data. The new rise in cases has resulted in the shuttering of Broadway shows, long wait lines at clinics and even longer wait times for test results, Gothamist reported.

One restaurateur expects to make just 60 percent of what the eatery owner anticipated before the uptick in cases hit, Rigie said. While both de Blasio and Gov. Kathy Hochul have said they will avoid shutdowns, the increase in coronavirus cases and the resulting loss in business is a harsh reminder of all that restaurants suffered through last year, Rigie said.

“The city’s restaurant [and] nightlife industry has been devastated by the pandemic,” Rigie said. “Pre-pandemic, this was the time of the year that many restaurants made their money because they operate on such thin profit margins throughout the rest of the year. This year, few people were hopeful to make much of a profit, but they were hoping to make some money to pay off some of the debt accrued over the past 20 months. As a result of the spiking cases and cancellations of parties and reservations, that hope has been tossed out the window.”

The Hospitality Alliance has called for financial assistance from the city and the state to offset the cost of sick pay for employees, convert sales tax to grants to be given directly to restaurants, loan forgiveness for restaurants, and the restart of the Restaurant Revitalization Fund — a federal fund initiated in the pandemic that provided aid to eateries.

The organization also called for getting rapid COVID-19 tests to restaurants, encouraging more people to get vaccinated and boosted, and bringing back a program that allowed consumers to purchase alcohol to-go from dining establishments — a program Rigie said was popular last year. The Big Apple is already offering residents $100 to get their additional dose of the vaccines at a city-run clinic, NBC reported.

And, of course, everyone is wondering about the Times Square ball drop — and the rumors are flying. Attendees at the ball drop are already required to be fully vaccinated or show a negative COVID-19 test taken within 72 hours of the drop to watch the event in Times Square, but the actual number of people joining in on the festivities could be scaled back, with masks required, Fox 5 reported. The mayor said he’s so far sticking with the original plan of a vaccination requirement, but is working closely with the Times Square Alliance, the organization in charge of the event, on a plan.

“We are currently working with the city on New Year’s Eve in Times Square and hope to be able to announce details before Christmas,” said a spokesperson for the Times Square Alliance.

Meanwhile, the city’s hotel industry was on track for a more profitable holiday season before cases began to tick up last week, said Vijay Dandapani, president and CEO of the Hotel Association of New York City. During the weekend ending Dec. 11, the city’s hotel industry averaged an all-time high nightly occupancy rate during the pandemic of 81.5 percent and revenue per available room of $274, another record, Dandapani said. That’s a huge increase from the 12-month average of $98 and a 53 percent occupancy rate.

“We were trending in the right direction,” Dandapani told CO. “We are watching with great trepidation New Year’s Eve cancellations. … Other cities like Paris and London have both canceled [their festivities] and that’s who we compare ourselves to frequently. If they do that [here], it’s going to badly affect our industry.”

Dandapani is watching City Hall with fingers crossed, though he doesn’t anticipate that the mayor would fully cancel the ball drop. Hotels under his organization have seen some canceled reservations, but if travel restrictions follow for international visitors — particularly those from the United Kingdom, which tend to spend more money when vacationing in the city — that could hamper the industry. Unfortunately for Dandapani and the hotel industry, the world seems to change on a dime.

“It’s just that there is so much uncertainty,” said Dandapani. “You can cancel with 24 hours notice and sometimes even less, so that’s our biggest fear.”

While the impact of the increase in COVID cases on the tourism industry has yet to be fully sussed out, there’s no doubt the negative effects of the surge on the return-to-office that many execs, if not employees, had looked forward to.

Google was one of the earliest companies to delay its return to work over fears of the omicron variant, followed by Uber, Ford and Wells Fargo among others. (The variant now represents 90 percent of cases in New York and New Jersey.) Working from home can also increase stress, adding to the mental health harm of a pandemic that has already come at such a high cost to physical health, said Joanna Frank, president and CEO of the Center for Active Design, an organization that helps design healthy buildings.

“Yes, this is an infectious disease, but it’s also taking a toll on people’s mental health,” Frank told CO. “Our mental health continues to take a toll in that we are once again frightened. We are afraid of the spread of this virus. So that is obviously affecting people’s behavior.”