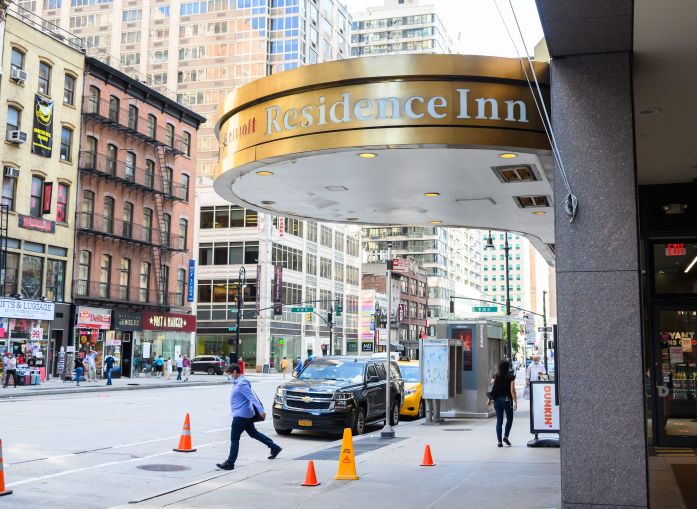 People walk outside the Residence Inn hotel by Marriott in midtown. Photo by Noam Galai/Getty Images

It’s no secret that hotels are hurting thanks to the coronavirus pandemic, but one hotel association fears property taxes coupled with low revenue may be taking another toll.

Property taxes on New York City’s hotels amounted to 30 percent of hotel revenue in 2020, up from the 9.4 percent it comprised in 2019, according to a report from the Hotel Association of New York City shared with The Real Deal. The cut from hotel profits comes after around 100 city hotels were forced to close during the early days of the pandemic, one of the reasons the Hotel Association is pushing for lower taxes.

The Hotel Association did not respond to a request for comment for this story.

Big Apple hotels were making a comeback in the weeks leading up to a coronavirus case surge in New York City. The city’s hotel industry averaged a pandemic-high nightly occupancy rate of 81.5 percent and revenue per available room, or RevPAR, of $274 over the weekend ending Dec. 11. Both numbers represented pandemic-era records, and a huge increase from the previous 12-month average of a nightly room rate of $98 and a 53 percent occupancy rate.

Vijay Dandapani, president and CEO of the Hotel Association, previously told Commercial Observer that the industry was trending in the right direction, though it remains to be seen how much the recent uptick in coronavirus cases will hamper the city’s New Year’s Eve tourism.

Thanks to the ongoing spread of the omicron variant and fallout from the nearly 200 hotels that closed between May 2020 and June, the Hotel Association is pushing for a lighter tax burden —  renewing its calls from earlier this year for the city to suspend penalties on late payments for property taxes.

New York has higher property taxes than other major cities, at just over 10 percent for commercial properties, including hotels, according to the New York City Department of Finance. Comparatively, Chicago has a property tax rate of 8.2 percent, Washington, D.C., charges 4.4 percent and Los Angeles charges 4.1 percent, TRD reported. The Department of Finance did not immediately respond to a request for comment.

The city has previously helped the industry during the pandemic, eliminating the 5.875 percent hotel room occupancy tax rate from June 1 to Aug. 31 in the hopes that hotels would lower room prices to boost tourism, the New York Business Journal reported.

But the New York City Council also passed a law mandating that hotels pay a weekly severance to furloughed employees if they remain closed, CO reported. The Hotel Association sued the city over the new rule, in the hopes of avoiding paying workers. The case is ongoing.

The law echoed a ruling in a case earlier this year. In a decision between the New York Hotel and Motel Trades Council and the Hotel Association, an arbitrator decided that 75 hoteliers had to pay more than $500 million to employees laid off during the pandemic. The hotel operators who remained closed indefinitely were required to pay their workers the severance they would have gotten under a permanent hotel closure, CO reported.