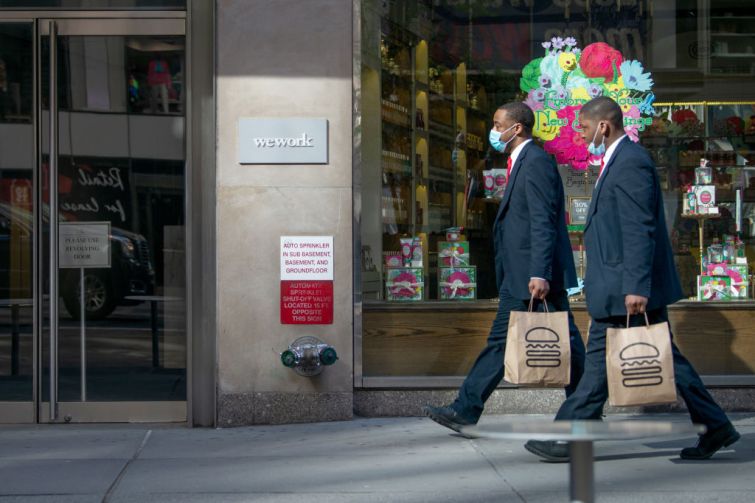 Manhattan recorded higher levels of office leasing in November compared to pre-pandemic levels, before a spike in coronavirus cases sent companies and citizens scrambling, according to a report from CBRE.

CBRE, which measures the top 12 office markets in the U.S., found that Manhattan’s leasing activity was higher than levels recorded in 2018 and 2019. The number of finalized lease agreements exceeded pre-pandemic levels by 2 percent in November, according to the report.

“We’ve gotten close a few times, but this is the first time we’ve crossed over that baseline [since the pandemic hit],” Nicole LaRusso, CBRE’s senior director of research and analysis, told Commercial Observer. “There’s been a steadily increasing volume of tenant inquiries and those are translating into signed leases.”

Before the pandemic, Manhattan saw about 1 million square feet of additional sublease space added to the market each month — rising to around 1.7 million per month last year during the early days of the pandemic, said LaRusso.

New sublease additions have ticked down the last few months thanks to tenants taking the space they put on the market back off and demand for subleases increasing, particularly in Midtown South which sports high-quality assets at a lower-than-usual price.

“The volume of additions has declined, but at the same time we’ve had a lot more leasing in the market,” LaRusso said. “In particular, a lot of tenants have been taking advantage of very favorable pricing on the sublease space that’s out there, some of which is offered with fairly [or] almost brand new installations. The tenants not only get a discount … but the space is in some cases already built out and ready for move-in.”

The square footage companies are actively looking to rent in Manhattan was just 1 percent below pre-pandemic levels in November — though firms may be reevaluating their return to office plans in the wake of a spike of coronavirus cases across the U.S. in cities like New York and Chicago, Washington, D.C. and Los Angeles.

Despite some companies like Google, Uber, Ford and Wells Fargo delaying their office homecomings, LaRusso doesn’t expect omicron to change the long-term trajectory of a return to the office. She is, however, keeping an eye on occupancy — a crucial factor when considering the demand for office space.

“Despite the short-term variation in cases and transmissions, longer-term occupiers expect to have office space in Manhattan and are making their long-term plans now,” said LaRusso. “Sooner or later, they expect to have their employees back in the office. I don’t think that changes. And, in fact, I think the news with omicron is encouraging in that it doesn’t seem to be causing the same level of hospitalizations and severe illness.”

Early evidence has suggested that omicron may cause less severe illnesses than other variants of the disease, like the delta variant, though the strain is spreading faster than any others. The omicron variant has caused a surge in cases nationally — resulting in thousands of holiday flights being canceled as crew members test positive for the virus — and will likely continue, said Dr. Anthony Fauci, director of the National Institute of Allergy and Infectious Diseases, this past Sunday.

Many of the areas CBRE’s study measured, which include Manhattan, Boston, Chicago, Houston, Los Angeles, San Francisco, Seattle and Washington, D.C., are experiencing a surge in coronavirus cases. The Centers for Disease Control and Prevention categorizes about 82 percent of U.S. states as areas of high transmission of the coronavirus, with only some northwest and southeast areas seeing moderate spreads of the disease, according to data current as of Dec. 22.