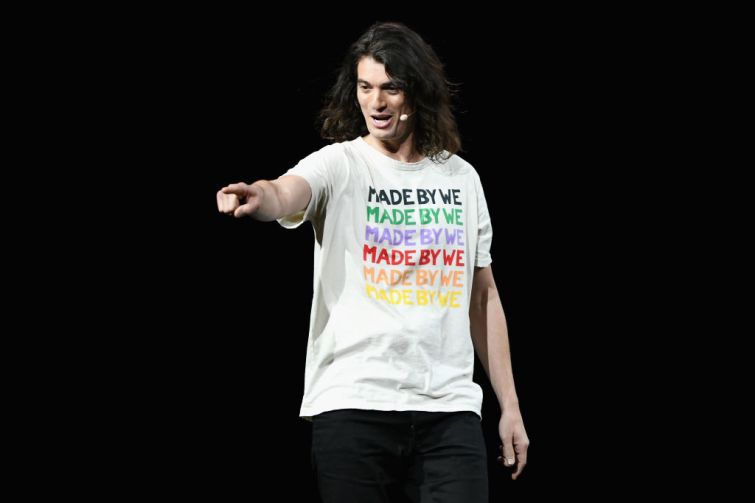 There are few things that can excite a real estate obsessed observer like a splashy, new documentary on WeWork co-founder Adam Neumann.

Hulu’s got one that premiered this week at South By Southwest (SXSW) and is set to come out on April 2. Moreover, the trailer looks like, in the words of one Commercial Observer staffer, “Frye Festival on steroids.”

Speaking of Commercial Observer, we’re publishing an interview with the doc’s director, Jed Rothstein, to coincide with the premiere, so stay tuned!

We doubt that Rothstein got footage of Neumann sneaking a cereal box full of weed on an international flight, but the trailer features keg stands, chest thumping, and all around whoops and hollering galore. Honestly, some of us are not sure we can make it until April 2. (If you really can’t take the wait, there’s Reeves Wiedeman’s “Billion Dollar Loser” to scratch that itch. And you can always preorder “The Cult of We” by Maureen Farrell and former Commercial Observer writer Eliot Brown, who broke the story about Neumann smuggling cannabis on a flight to Israel.)

One of the more interesting pieces of news that broke last week was that Arkhouse, Sapir and 8F Investment Partners made a $2.2 billion offer on Columbia Property Trust.

The investor group already owns about 3.3 percent of Columbia’s stock and is currently doing due diligence on the REIT.

And there was another interesting acquisition announced last week: NewLake Capital Partners announced a merger on Thursday with GreenAcreage Real Estate Corp. to create what will be one of the largest REITs in the cannabis space.

Both REITs specialize in sale-leaseback industrial and retail real estate portfolio transactions, doing business with operators, such as Columbia Care, Trulieve, Cresco Labs and Curaleaf. The new partnership, which will assume the NewLake Capital Partners name, has a portfolio of some 24 properties in nine states valued at around $325 million.

In other good news, while hospitality remains a shell of its former self, there are some interesting trends showing that the worst might be over. Tourists have started to come back to Times Square, for one thing. The Wall Street Journal reported data from STR that the occupancy rate had risen to 47 percent.

And, remember how everybody is leaving New York City for the more business-friendly environs of Miami? Well, at least one firm has decided to migrate back north. Citadel had done its trading at the Four Seasons Palm Beach since the crisis started, but has decided to move operations back to New York and Chicago on April 1. (Although, in truth, they might be in the minority; financial services provider Janney Montgomery Scott just signed a lease at 3001 PGA Boulevard in Palm Beach Gardens, as did Cummings & Lockwood.)

Let’s not break out the Champagne yet.

While there’s been a definite surge of optimism lately about a speedy return to a soaring economy, there are still some stumbles to overcome.

The Associated General Contractors of America reported that personal protective equipment is scarce and construction workers are being infected by COVID-19, which, in turn, is causing construction delays and driving up labor costs.

A new survey from KayoCloud says that 39 percent of landlords nationwide don’t think that the hallowed 10-year lease will even be a thing by September 2022.

And, on Thursday, a Delaware bankruptcy court approved the sale of Knotel to Newmark. In January, Newmark made a $70 million stalking-horse bid on the flex space company, and no other buyers stepped in with other offers.

Newmark CEO Barry Gosin has said that he plans to keep on staff “many, if not most” of the 106 people who work at the company.

Those who followed Ample Hills’ rise remember it as a modest (but extremely busy) storefront on Brooklyn’s Vanderbilt Avenue that loaded up their premium ice cream with oatmeal cookies, cake batter and Fruity Pebbles.

As Rubin detailed, the ice cream outfit, started by husband-and-wife team Jackie Cuscuna and Brian Smith, grew wildly since its 2011 inception; Oprah Winfrey, Questlove and Disney’s Bob Iger were all superfans (Iger even struck a deal to make it the official ice cream of Star Wars, launching flavors like the “Dark Side” which were heavy on the chocolate).

Ample Hills raised a considerable amount of capital ($19 million) and were making a serious claim to be the inheritor to Ben & Jerry’s. But, they expanded too quickly: the company spent millions on a 15,000-square-foot factory and ice cream museum at 421 Van Brunt Street in Red Hook; took on expensive leases around the country in neighborhoods with low foot traffic; allowed the stores they had already opened to be neglected; and had to file for bankruptcy early last year, even before the pandemic struck.

Well, don’t count founders Smith and Cuscuna out yet!

This week, they signed a 10-year lease on their new ice cream parlor, Social, back in their old stomping grounds of Prospect Heights, at 816 Washington Avenue, with plans to open this summer.

In addition to an ice cream counter, Social will (according to their brokers at TerraCRG) include a party room, sidewalk seating and a donut station. Ice cream production will be done on-site at the 2,700-square-foot space, and there will be a spot for customers to watch the process take place.