The trading behemoth will be checking out of the Palm Beach Four Seasons, its luxury pandemic home for the past year 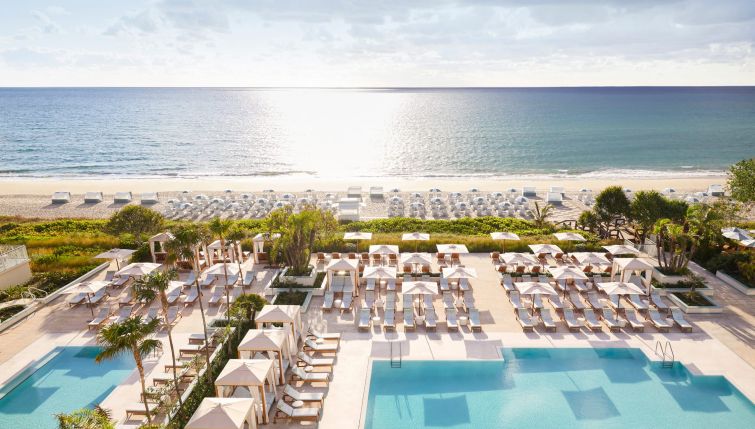 Citadel Securities, the financial market maker that responded to the COVID-19 pandemic by opening a trading floor inside the Four Seasons Resort Palm Beach, will leave the Florida hotel by April 1, and forgo establishing a permanent office in the Sunshine State, returning instead to Chicago and New York, according to a person close to the plans.

After work-from-home orders were imposed in March 2020, Citadel Securities rented out the entire seaside hotel at 2800 South Ocean Boulevard in Palm Beach, an island town known for being a popular winter retreat among America’s one percent, located 30 miles north of Boca Raton. For a small subset of employees, the firm created a makeshift trading floor, which began operations on March 30. While the property holds 207 rooms, it’s unclear how many employees have stayed there.

For the past 12 months, both traders and hotel staff have worked and lived within the confines of the luxurious establishment. If employees leave, they can only re-enter after quarantining, the source said. Police officers and private guards are stationed along the edges of the property. “There was no in and out; everyone staying at the resort stayed,” said hotel spokesperson Laurie Herrick.

Some traders brought their families, with children seen playing within the fenced-in portion of the beach. After hours, their parents would join them. On the weekends, traders were spotted sunbathing and playing volleyball. It’s a hermetic, pandemic-proof seal, albeit quite a sumptuous one.

With the vaccine rollout underway and a semblance of normal on the horizon, that gilded bubble is now about to burst. The Four Seasons has begun taking reservations starting April 1, according to Herrick. Indeed, a search on the hotel’s website shows rooms available in early April between about $1,000 to $5,600 per night (plus resort fee).

The traders will return north to Chicago and New York, where the firm has respective offices at 131 South Dearborn Street and 601 Lexington Avenue. Some will work out of those offices and others from home, the source said.

During its stay in Florida, Citadel Securities hit the headlines over its relationship with online broker Robinhood. Citadel Securities pays Robinhood to conduct the brokerage’s trades and, in return, Citadel Securities obtains real-time information about which stocks Robinhood users are selling and buying. While legal in the U.S., critics, like Democratic Sen. Elizabeth Warren, say this practice poses a potential conflict of interest. Citadel founder and CEO Kenneth Griffin testified before Congress in February about its relationship to Robinhood and its role in the trading frenzy over GameStop’s shares.

Citadel Securities has rejected claims of improper conduct. Griffin told CNBC that the market maker does not receive any personally identifiable information from the trades. The founder reiterated that message at his congressional hearing, adding that “We simply play by the rules.”

Griffin is a Palm Beach fixture and is listed by Forbes as one of the richest people in Illinois. He is a prominent right-wing political donor, contributing $5.75 million to a political action committee designed to elect Florida’s current Republican Gov. Ron DeSantis in 2018, according to state records.

During the lockdown, he appeared to have passed on staying at the hotel. But Griffin wasn’t slumming, either.

Last month, he filed for a building permit for a seven-and-a-half acre Palm Beach plot, which cost $130 million, at 6 Blossom Way, just down the street from Donald Trump’s Mar-a-Lago. Plans for the new mansion include floor-to-ceiling windows, a palm tree-lined garden, shuffleboard courts, a pool, and a guest house.