Is Florida OK? How Real Estate Has Been Faring in the Sunshine State

Eager to reopen its economy, Gov. Ron DeSantis has vowed never to lock down the Sunshine State again. The result has been surging COVID-19 cases — and real estate investment galore. 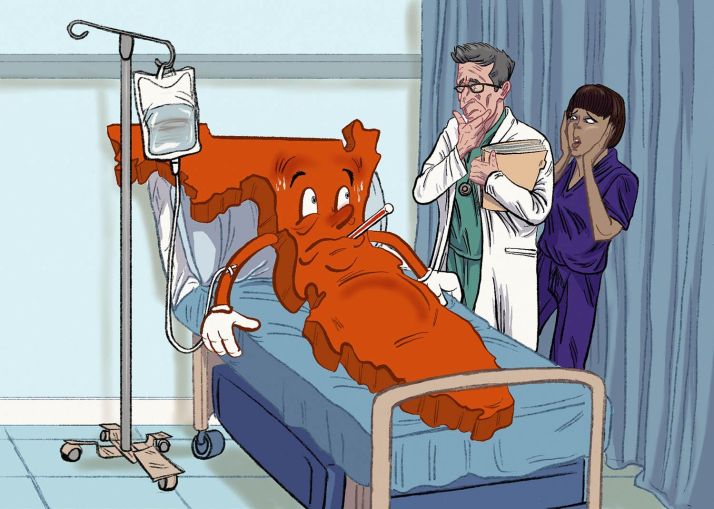 Florida has seen a rising number of COVID-19 cases after the state vowed not to lock down again. But it's also seen a surge in real estate activity. Illustration: Spencer Alexander

As the U.S. grappled with the spread of the coronavirus in May, Florida got the jump on most of the country and began to roll back restrictions for bars and restaurants. (New York waited until June before it started to implement such reopenings.) Florida Gov. Ron DeSantis went a step further in late September and lifted all restrictions in the state.

Since then, however, Florida has seen a sharp increase in the number of COVID-19 cases and started to deal with another flareup last month. On Oct. 29, the state faced its third consecutive day of at least 4,000 confirmed cases, the Miami Herald reported.

People questioned whether Florida reopened too soon, something DeSantis has publicly stated he doesn’t think is true. And he put the kibosh on any chance the state would lock down again to curb the spread of the virus.

“We will never do any of these lockdowns again,” DeSantis said, according to WPTV. “I hear people say they’ll shut down the country and, honestly, I cringe.”

All of this might lead some to question if Florida is OK. For the real estate community, the answer has been a resounding yes.

In recent months, an increasing number of people have moved to Florida, which has helped its housing market boom. Financial firms have announced plans to open offices there, while plenty of firms have either started throwing capital all around Florida or amped up their existing investment.

“You’ve definitely seen the flight to Florida accelerate,” said Josh Zegen, a co-founder of private equity firm Madison Realty Capital (MRC), which has been active in Florida. “It was already happening pre-pandemic, mostly driven, in many cases, by tax considerations.”

Many pointed to Florida’s low-tax environment — it has no state income tax — as a key driver of businesses looking to move or invest in assets, regardless of a global pandemic.

With New York also starting to see a spike in COVID-19 cases and people worried about a second wave hitting the city in the winter, more residents have started to follow the snowbird migration and seek Florida’s sunshine despite its own coronavirus surge.

“In the last month, there’s been a ton of interest from out-of-Florida buyers and renters,” said Topaz Capital’s Jared Isaac, who manages the firm’s Florida assets. “People are scared about being in New York in the winter. People have nowhere to go, because indoor dining is not really a safe thing. People want to go to Florida, where things can be happening outdoors.”

A report from Redfin found that the number of people looking to move to Florida almost doubled in the third quarter, to nearly 22,000, compared to the same time last year, the biggest increase since the brokerage started tracking the metric. Many of those looking to migrate currently live in New York City.

“New York’s loss is Florida’s gain,” Redfin economist Taylor Marr said in the report. “When the pandemic hit the U.S. in March, remote workers started leaving New York City and its ultra-expensive housing in search of wide-open spaces, sunshine and affordable homes — all of which you can find in Florida, with the bonus of no state income tax. The trend has only intensified as the pandemic continues and people feel more certain of their remote work and school plans.”

A report from the MIAMI Association of Realtors and the Multiple Listing Service found that total home sales in Miami-Dade County surged 12.5 percent year over year in September. Single-family home sales jumped by 19.3 percent in that time while condo sales increased by 6.3 percent.

“There are definitely people I know that were on the fence [about moving to Florida],” Zegen said. “They accelerated those plans.”

Zegen added that demand means Florida has not seen “the deterioration of pricing” for rental units as New York did during the pandemic.

As proof, he pointed to Invesca Development Group’s 214-unit apartment development in Pompano Beach, for which MRC provided a $102 million construction loan, along with another Invesca project in Plantation. The Pompano Beach development started leasing in July, and already rented 45 percent of its units at rents MRC projected pre-pandemic, Zegen said.

And it’s not just employees looking to ditch the brutal New York winter for the Sunshine State — employers are starting to follow suit as well.

A bevy of hedge funds drawn to its low-tax environment have opened offices in Florida in recent years, including Verition and ExodusPoint Capital Management, Bloomberg reported. Others, like Chicago-based Balyasny Asset Management and Manhattan-based Elliott Management Corp., are considering following suit.

“That has been accelerated by the realization that companies can function in a less-centralized manner,” Adam Metzger, vice president at development and investment firm L&L Holding Company, said. “And the talent pool in South Florida is continually deepening.”

The flood of new residents and investment firms led L&L Holding to embark on its first project outside of Manhattan this summer. It acquired a three-acre site in Miami’s Wynwood Arts District in June to build a nearly 800,000-square-foot development with luxury rentals and office space.

“The trends are very compelling,” Metzger said of Florida. “We think it’s an intelligent thing to place some capital in front of this demographic shift.”

The developer partnered with Carpe Real Estate Partners for the Wynwood site and plans to finish construction on the project — which will have more than 500 residential units and between 200,000 to 300,000 square feet of office space — in 2024.

L&L Holding had been eyeing investing in Florida for months before COVID-19 hit the country, as it sought to diversify its portfolio outside of Manhattan, but didn’t hesitate to close the deal during the pandemic. If anything, Metzger said, the number of people moving to Florida recently “confirmed our conviction” on the decision. The developer is also in contact to buy a multifamily building in Palm Beach Gardens and is considering other investments around the state.

“Florida is receiving more attention this year just as folks hit pause on their gateway city investment strategies,” Metzger said. “It’s contrarian to be aggressive right now, so you can find opportunities.”

The recent spike in coronavirus cases, for the most part, hasn’t scared off residents and investors, since cities in Florida tend to not be as crowded as New York.

“It’s more spread out; there is this view that there is a larger landmass and it’s not as dense,” Zegen said.

And investors remain convinced that Florida is a safe bet, regardless of its government’s seemingly lackluster approach to the coronavirus pandemic. Topaz Capital’s Hershberg said he might have had a “little more hesitation” heading to Florida for the first time during this period; but since his firm already planted a flag there, he’s not worried about looking to grow in the state.

“We were already in the market well before COVID-19 and we were not phased by [it] really at all,” he said. “We definitely think COVID-19 is a short-term hiccup and not a long-term terminal illness.”

Hershberg said his firm worked to ensure its staff and residents felt safe during this period, while Metzger said L&L Holding was making sure the health of its future tenants plays a large part in the design process of its Wynwood development.

“It’s been a dark year for many,” Metzger said. “But I think the lessons that we’ve learned revolve around the priority of our tenants’ health, and that’s something that we’re thinking about every day as we design our projects.”

But even as real estate seems like a bright spot in Florida, it hasn’t all been rosy. In the third quarter of this year, office leasing in Miami remained well-below historic averages and vacancies rose by 120 basis points, according to a report from JLL.

The amount of sublease space for rent in Miami increased by nearly 400,000 square feet in that time, while net absorption decreased, according to JLL. Tampa Bay faced similar issues, with JLL’s Kyle Koller telling the Tampa Bay Times that sublease space in the city during the third quarter started to rival peaks from the dot-com era.

And, even with the high demand and prices for single-family homes, some have started to draw parallels to what the market looked like just before the Great Recession hit.

“We’re in a huge bubble-type thing right now,” Keller Williams’ Teri Arbogast told the South Florida Sun-Sentinel. “I already put a house on the market, and I already got a full price offer and I haven’t even shown it yet. The last time I saw this happen was in 2004-2005.”

Hershberg said there have been fewer investment opportunities for value-add assets with “sound investment plans” without a huge amount of risk. Another problem is the prices of building materials have started to shoot up in recent months, increasing the costs of construction around the state, he added.

Meanwhile, the things attracting people to Florida have led a wave of investors who don’t know much about the state looking to make deals.

“We’ve been seeing more people coming in with limited or no knowledge in the market that are putting out offers that make zero sense,” Hershberg said.

Even with all of that, investors still remain bullish on Florida. Hershberg said his firm has been “as aggressive” as it was pre-pandemic looking for deals, while Zegen said his interest in the market hasn’t wavered one bit.

“We’re looking at more opportunities and we will be doing more business,” Zegen said. “Our capital is really in great demand in Florida.”