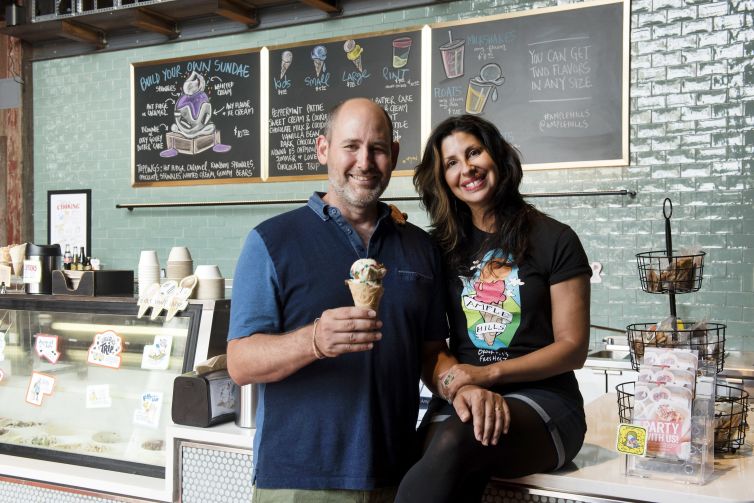 The co-founders of Ample Hills Creamery, who left the company last year after a bankruptcy sale, plan to return to Prospect Heights, Brooklyn, with a new ice cream shop.

Jackie Cuscuna and Brian Smith signed a 10-year lease for 2,700 square feet at 816 Washington Avenue for their new venture dubbed the Social, brokers on the deal said. Asking rent was $53 per square foot.

The new ground-floor space will include an ice cream counter, donut station, party room, a spot to watch the ice cream production inside, and sidewalk seating, according to tenant brokers TerraCRG. The Social plans to open in the summer.

The Social marks a return for Cuscuna and Smith to the neighborhood where Ample Hills was founded nearly a decade ago and comes a year after the popular ice cream shop filed for bankruptcy.

“Despite the lingering effects of the global pandemic, Brooklyn’s homegrown businesses are resilient, and Jackie and Brian are perfect examples of the spirit and tenacity of our local retailers,” TerraCRG’s Peter Schubert said in a statement. “We are thrilled to have found this location to help Jackie and Brian return to the neighborhood where their ice cream journey began — and offer a unique experience to residents looking for new places to reconnect.”

Cuscuna and Smith started Ample Hills as a pushcart in Prospect Heights in 2011 and later opened its first brick-and-mortar location in the neighborhood at 623 Vanderbilt Avenue. In 2015, the ice cream purveyor closed a $4 million fundraising round and grew to 17 locations in Manhattan, Brooklyn, Queens, Florida, Los Angeles and Jersey City, N.J.

The company made a splash in 2018 when it opened a 15,000-square-foot factory with an ice cream museum attached at 421 Van Brunt Street in Red Hook, which cost $6.7 million to build. Smith later acknowledged it was “probably the financial decision that ultimately led to the bankruptcy.”

Ample Hills filed for bankruptcy on March 16, 2020, in an attempt to “restructure and refocus” its operations, and was bought by Portland, Ore.-based Schmitt Industries for $1 million in July. Cuscuna and Smith left the company after the sale.

As for their new venture, Cuscuna and Smith said the Social will host parties, classes and monthly events to raise money for local causes.

“Ice cream has the power to transport us to a world of imagination, where we can be children again, alive with magic, a world where everything in life, in the universe, remains possible,” Cuscuna said in a statement. “That’s what we’re after with every scoop — to gather people together to bridge divides and build community.”

TerraCRG’s Schubert represented the Social in the deal, while Timothy King and Ryan Parsons of SVN | CPEX Real Estate handled it for the landlord, ELH Management.

“This is a good example of what happens when an enlightened owner recognizes early on that this is a tenant that just didn’t benefit the building but the neighborhood as well,” King said, “and, consequently, worked very diligently to get this thing to the finish line.”