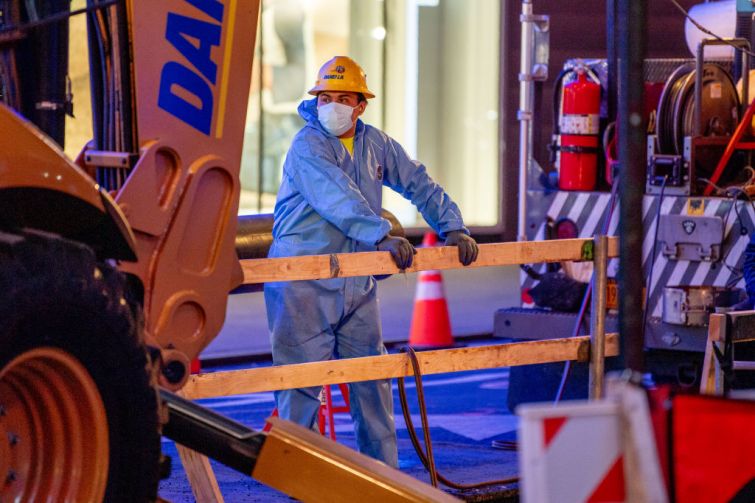 Nearly half of contractors in New York are experiencing construction delays because of personal protective equipment (PPE) shortages and infected workers, according to data released last week by an industry trade group.

The statewide survey by the Associated General Contractors of America found that 46 percent of contracting firms were struggling with project delays because of PPE shortages. And 41 percent said that work had slowed because of potential coronavirus infections on-site. Meanwhile nearly a quarter — 22 percent — of contractors reported a shortage of specialized labor or subcontractors. More optimistically, a third of respondents said they were not experiencing any delays.

The contractors surveyed were nearly unanimous on one thing: materials have gotten more expensive during the pandemic. Eighty-four percent said that materials, parts and supplies were pricier than they were a year ago. Nearly half reported that trucking and deliveries had also gotten more expensive since March 2020.

More than half of all construction companies surveyed said they had incurred additional costs because projects took longer. Eighty-one percent noted that personal protective equipment and sanitizing procedures had raised costs.

Two-thirds of contractors said they had fewer contracts to bid on during the pandemic, and 79 percent reported they had projects that had been postponed or rescheduled in 2020 or 2021.

“The survey results make it clear that the construction industry faces a variety of challenges that threaten to leave many firms and workers behind, even as some parts of the economy are recovering or even thriving,” said Ken Simonson, the association’s chief economist. “The pandemic has left the supply chain for a range of key construction components in tatters and undermined demand for a host of private-sector projects.”