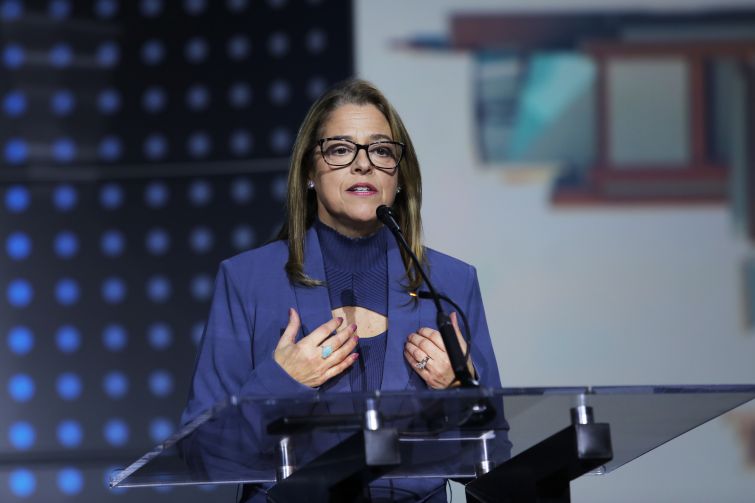 It’s early January and that means one thing: the Commercial Real Estate Finance Council conference (better known as CREFC) at the Loews Miami Beach Hotel, and Commercial Observer was on the ground!

Last year attendance was sparse due to the Omicron flareup, but the conference was rocking last week, kicking off last Sunday with parties where the chatter largely concerned shoring up wobbly business.

“The focus of the conference at the moment is more around how you address the challenges for the current book and how you protect existing investments,” Bill Sexton, CEO of Trimont Real Estate Advisors, told CO. “There is also an eye on how we invest into markets as asset values come back and we start to get some sort of price discovery and we start to close the bid-ask spread, which is pretty wide right now.”

“Once the market recognizes that the Fed is going to hold steady for a while, you’re going to see activity pick up,” predicted Mark Fogel, CEO of Acres Capital. “We just don’t know how bad inflation really is. We don’t know how much more they have to do to tame it, and it’s really hard to invest in anything until you know that.”

CO spoke to Fogel at greater length about the state of the market in general, and he was fairly philosophical (in a good way) about 2023.

“I think our economy is good,” Fogel said. “The real estate market was held in check and it’s not oversupplied. So I think that the country as a whole, besides the interest rates spike, is in a good place. We’ll be back on good footing in a year or two, and that’s what happens in cycles. You get hurt for a year or two, then bounce back.”

Some of the discussion at CREFC was about politics and the changing of the guard in the House of Representatives.

North Carolina Republican Patrick McHenry recently replaced California Democrat Maxine Waters as chair of the House Financial Services Committee — so, what will that mean for commercial real estate? (It’s an especially tricky question given the radicalism evinced by the Freedom Caucus and the potential for… well, we’re not sure.)

“Patrick McHenry is a thoughtful member, and he is a good man who cares about the issues that his committee has jurisdiction over,” BTIG’s Isaac Boltansky assured the audience on the CREFC panel “Government Relations Update and Regulatory Pipeline.”

Boltansky said he believes that one of McHenry’s biggest priorities in the coming months will be cryptocurrency, but a major overhaul would be unlikely. McHenry’s counterpart on the Senate side — Democrat Sherrod Brown — is also expected to focus on cryptocurrency and climate change.

Brown “sort of has a responsibility at this point to get into the crypto game,” said Genger Charles of the Amherst Group. “They will try to build a record around specific impacts to the financial sector of climate change and try to help create that counterbalance as the record is being formed for what is the acceptable regulation.”

Another topic that was bandied about: CREFC’s new debt fund index, which was created with the National Council of Real Estate Investment Fiduciaries to gather data from debt funds and bring the information in line with CMBS. CREFC Executive Director Lisa Pendergast unveiled it.

Beyond CREFC there was a lot that captured our interest in Miami last week.

There were sales like Last Mile’s purchase of three Broward County warehouses for $65.8 million from Steven J. Cooperman.

There were delicious leases, like Motek Cafe, the Mediterranean-influenced Israeli restaurant, taking 7,600 square feet at the Ten Aragon Condominium in Coral Gables.

There was money that was lent out, like to Vlad Doronin’s Oko Group and Len Blavatnik’s Access Industries, which scored $242.4 million in construction money from Bank OZK for their Aman-branded condo and hotel, the Versailles Hotel, in Miami Beach.

There were exciting new proposals like Swire Properties’ plans to bring two new towers (one 1,049 feet tall and the other 700 feet) to Brickell Key Park.

And because we couldn’t get enough Miami condo talk we sat down with Taylor Collins, the co-founder of Two Roads Development, to talk through his new Forte project in West Palm Beach, Edition Residences in Edgewater, and the company’s joint project with Related Group on the 24-story Residences at Bal Harbour.

This is not to say there wasn’t activity in Gotham.

Lately, we’ve been most captivated by the huge number of recently sold Financial District office properties where new owners are intent on converting the addresses to housing.

GFP Real Estate and MetroLofts are converting 25 Water Street into 1,300 apartments; MetroLofts is also teaming with Silverstein Properties and Fortress Investment Group on converting 55 Broad Street and 85 Broad Street, respectively. (While we’re on the topic of Broad Street, check out 60 Broad’s new facelift.) Although, without legislation to incentivize such changes, it will be difficult to imagine office-to-residential conversion sweeping the city. Still, this seems like a good first step for an underserved residential market.

But one shouldn’t be too hard on New York’s office market. Brooklyn office leasing actually saw a terrific end of the year. The fourth-quarter numbers released from CBRE show leasing 30 percent above the quarterly average for Brooklyn in the last five years and 91 percent above the third quarter.

Plus, we saw other interesting leases happening in Manhattan last week; there were big expansions like Incline Equity Partners increasing its footprint by two-thirds at 101 Park Avenue; there were big relocations like the Jamaican consulate moving to 300 East 42nd Street; and there were very big renewals like Two Sigma Investments re-upping an impressive 265,000 square feet at 100 Park Avenue.

If more CEOs like Bob Iger have their way, one can expect even more office leasing on the horizon. He’s ordering Disney workers back to the office four days a week.

And this summer you’ll be able to celebrate all this activity at Simon Oren and Robert Guarino’s new Italian restaurant on the Upper West Side.

Lessen for the books

And it certainly seems to validate the thesis that there will be more consolidation of proptech companies in the coming year.

We were highly intrigued when we learned that Glenwood Management has installed a small-scale carbon capture system (invented by a startup called CarbonQuest) at The Grand Tier building on the Upper West Side.

It captures 500 to 600 tons of carbon dioxide per year! Then the carbon is sold to a Brooklyn company that uses it as an ingredient to make bricks, sequestering that carbon forever.

This sounds like the answer we’ve all been waiting for because New York has been preparing for many costly changes due to Local Law 97. And beyond New York, other cities are also preparing themselves for a future where emissions are penalized.

These changes will undoubtedly be tough on owners with large portfolios across many different states.

Tomorrow is Martin Luther King Jr. Day. In addition to taking the day to celebrate King’s legacy, it’s also an opportunity to reflect on all the issues of social importance that we face.

We were somewhat disheartened to read in The New York Times about the struggles Black brokers in residential real estate are still experiencing in 2023.

In addition to the cold, hard data — Blacks make up only 6 percent of brokers even though they’re 14 percent of the population; Black agents make three times less than their white peers; Black-owned property sells at 23 percent less than white-owned property — there were an abundance of maddening stories about overt discrimination:

Brokers who had to change their given names to sound less Black; brokers who had the cops called on them when they were showing houses; clients demanding that their broker not feature their photograph on any promotional materials. There were many other examples.

It should make us all more cognizant that, for all our riches and all our advancement, America still has a long way to go on so many vital issues. One sees it not just with racism and not just with the environment, but also in issues like homelessness. It has been a growing problem in San Francisco, Los Angeles, New York and other cities. We asked some of the top thinkers on this issue what they would do about this extremely serious problem.

These are all things that we will be reflecting on this Sunday.