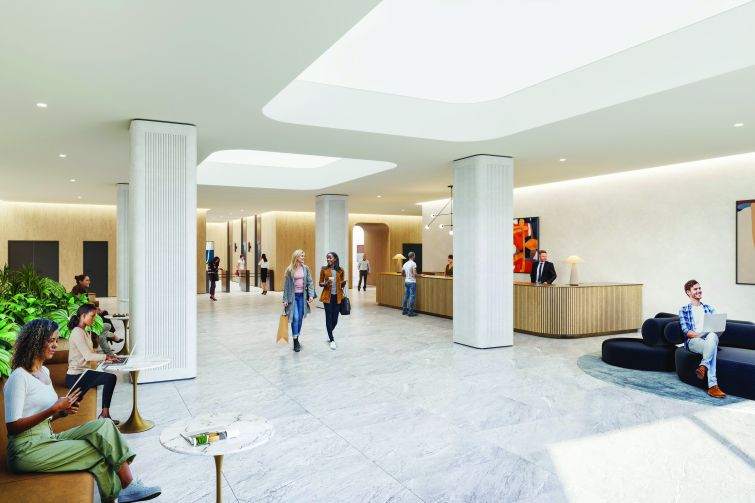 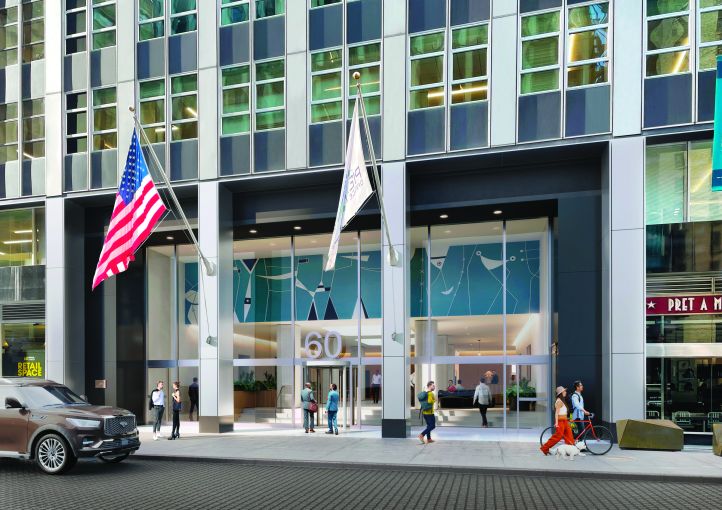 As some Financial District landlords turn to residential conversions to fill floors of empty office space, others are staying the course with renovations they hope will attract the tenants they need. Such is the case at 60 Broad Street, an early 1960s tower with 100,000 square feet of vacant space on its upper floors.

Owner Piedmont Office Realty Trust expects that revamping its 1980s lobby will help bring in a younger, hipper class of companies to the 39-story building.

The renovation will replace dark wood walls and green marble paneling with gray stone floors, white plaster walls and midcentury-
inspired wall art. Other updates include a seating area with couches near the front of the lobby, a new reception desk off to the left made of fluted oak and topped with an antique brass counter, light wood paneling along the back wall and the elevator lobby, and lit carve-outs in the ceiling that mimic skylights.

Chicago-based artist Cody Hudson is designing a new mural on the front bulkhead of the building that will feature blue and white geometric shapes and lines. It will be visible from the street through the plate glass of the lobby entrance and be reminiscent of a nearby mural on 2 Broadway two blocks away. (The same architect, Emery Roth & Sons, designed both buildings.) Dutch painter Thomas Trum will create a 7-foot-long, brightly colored painting for the right side of 60 Broad’s lobby, and artist Jackie Head will create a large porcelain sculpture that will hang along the back wall.

“We’re trying to put in an exciting contemporary art program that speaks to some of the more ambitious artworks in this neighborhood,” said Lyle Starr, the art program director at Morris Adjmi who’s overseeing the project. “This midcentury-type building often has a signature artwork.”

Morris Adjmi has occupied a floor and a half in the building for six years, which is why the landlord chose them for the renovation.

John Wheeler at JLL is marketing the 100,000 square feet of available space in the building, which has asking rents from $50 to $60 per square foot. He felt that despite 60 Broad Street’s age and the Financial District’s high office vacancy, the building still had strong leasing potential.

“We all know the market is challenged for new demand,” Wheeler said. “Those that are unable to provide a compelling environment, they don’t have any activity. Piedmont felt this was worth the investment because the tower floors are good for mid-sized occupancy, for tenants ranging from 5,000 to 14,000 square feet. Once you get people up on the tower floors, people are like, ‘Wow it’s great.’ We needed to elevate the arrival experience and the aesthetic to mirror what could be created upstairs.

“We’re hearing about some buildings where the landlords are having to hand the keys back to their lenders,” he added. “The fact that this building is owned by a substantial national REIT, tenants know they’re going to be in an asset that’s financially sound and well capitalized.”