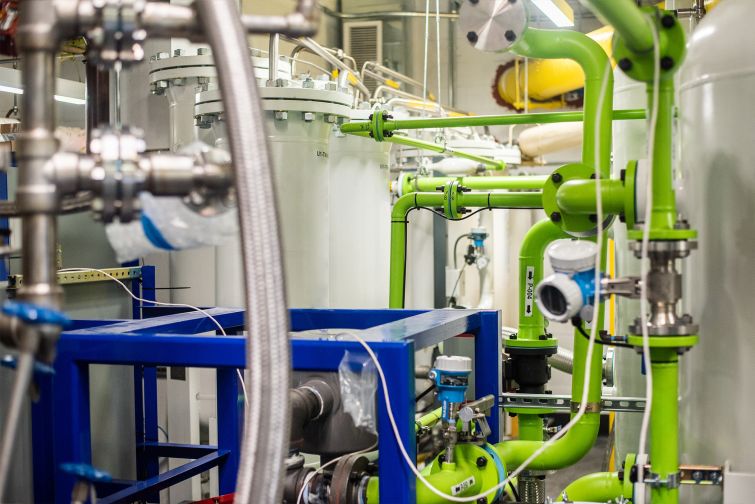 The Grand Tier could be the set for “Only Murders in the Building.” The glassy Upper West Side building rises 30 stories, just across Broadway from Lincoln Center’s broad plaza, and across West 64th Street from well-heeled restaurants like Bar Boulud and Cafe Fiorello.

But the building is notable for a different reason than its enviable location and cultured residents. Down in the basement, the owner, Glenwood Management, has installed the first small-scale carbon capture system designed for a commercial building, and it’s been sucking carbon out of the air ever since.

The system, devised by startup CarbonQuest, sucks carbon dioxide emitted by the building’s natural gas usage into its equipment, then cools and liquifies it, storing the liquid form in tankers that can then be sold by the ton. “It looks like a refinery,  a bunch of pumps and depressors, all run by a computer program,” said Josh London, senior vice president of management at Glenwood, which is leading the effort.

London installed CarbonQuest’s prototype in the Upper West Side building in 2021, just two years after the company was formed. Though carbon capture technology itself has been around for decades, it has only been available to, and designed for, massive power plants and industrial facilities. CarbonQuest scaled down the equipment so that it can fit into a basement or parking lot. The one installed at 1930 Broadway spans six parking spaces; the newest version spans just three or four.

That’s a sacrifice of several highly valuable parking spaces, but the system pays for itself over several years, said London. It captures about 500 to 600 tons of carbon dioxide per year, and is expected to cut emissions from natural gas by 60 to 70 percent, according to CarbonQuest.

“Even with six spaces at $500 a year, we’re making many times that,” said London.

Every few months, a tanker shows up at the building and transfers the liquified CO2 to several buyers, one of which is the coincidentally named Glenwood Mason Supply — the only remaining brick manufacturer in Brooklyn. Glenwood Mason Supply uses a different decarbonization technology, called CarbonCure, to sequester carbon dioxide within the bricks it makes, because when carbon dioxide is injected into concrete it changes its chemical composition, removing the carbon dioxide from the planet altogether.

“Once that conversion takes place, it’s permanently sequestered,” London said. “Even if the blocks get demolished in the future, there’s no more CO2.”

This is a key feature for London. In the past, carbon capture got a bad rap because the CO2 that was captured was pumped back into the ground by oil companies to simply create more oil, essentially defeating the purpose altogether. “The one thing that we’ll never do is sell it to oil or gas companies because they don’t permanently sequester it,” London said.

That’s a perk for Glenwood Mason Supply’s Jeff Hansen as well. The brick manufacturer is a pioneer in carbon sequestration, having installed CarbonCure technology in one of three cement-mixing machines at its Brooklyn facility back in 2017.

“It’s like a baking mixer. We dump all our ingredients in there,” Hansen, the company’s director of architectural sales, explained. Like all concrete, theirs is made from cement, water and aggregates: one of Glenwood’s aggregates is carbon dioxide, which gets pumped into the concrete in a dry-ice-like form, where it gets mineralized and locked into the dried brick. Another is crushed glass from New York City’s waste facilities. Both products minimize the amount of cement in the mix, which reduces the CO2 emitted by the manufacturing process of cement. Because of its ubiquity, the making of cement alone contributes a staggering 7 percent of all emissions globally.

So when CarbonQuest came to Hansen with the idea of using emissions from New York buildings to supply Glenwood Mason’s CO2, he was more than game. CarbonQuest’s CO2 is more affordable than the alternative and easier to transfer since it’s close by. Best of all, he can be sure it’s contributing to decarbonization

There’s another perk, according to Hansen. The emitted CO2 from 1930 Broadway goes into Glenwood’s bricks, and then those bricks are used to build other New York buildings. “We’re a model for a circular economy,” Hansen said. “We’re pioneering the circular economy model. That’s pretty cool.” In the last year, Glenwood Mason Supply has installed CarbonCure in its two other cement mixers, but can still only accommodate about one quarter of the carbon dioxide captured from one Glenwood building, so about 150 tons per year.

While London says the equipment is turning a profit, he’s more driven by the need to decarbonize cities quickly. London has been experimenting with various forms of energy and emissions reductions long before Local Law 97 was even a whisper among New York City policy makers. The  looming law — which requires most building owners to cap carbon emissions at a designated benchmark by 2025 or face fines — makes the business case for carbon capture even stronger.

“Early on, we started to recognize how much more than a line-item was our cost of our energy, and therefore emissions,” said London, who introduced a demand response protocol at Glenwood back in 2001. “Obviously we’re pushed by Local Law 97 and ESG concerns. It’s not enough, but carbon capture is going to be a cornerstone for us.”

Similarly, the CarbonQuest team started its work in New York largely due to the looming regulation, said Brian Asparro, co-founder and chief operating officer of CarbonQuest. “The drive to ESG and compliance in places like New York really was a driving factor as to why a building should do [carbon capture],” Asparro said.

If it sounds too good to be true, that’s because it’s not a get-out-of-climate-disaster-free card. For one, to stop the accelerating pace of warming, we’ll need to drastically reduce harmful emissions to begin with, not just remove what we do emit. Second, if the technology truly went mainstream, carbon dioxide would potentially lose value—plus, there would need to be ways to safely sequester large quantities of it. Finally, the equipment works only for buildings still using older technologies to heat, cool and operate.

“The goals are to electrify everything. I am 100 percent all for that,” said London. “That’s the way to go, and I sincerely hope to be doing what I’m doing here when we can dismantle all the carbon capture equipment because we have a 100 percent renewable grid.”

But electrifying New York City’s grid is a slow-moving project, and it is no match for the speed of the rapidly heating planet. In the meantime, natural gas usage for heat, hot water and cooking emits 17.2 million tons of carbon dioxide in New York per year, according to city data.

“I can’t wait 20 years for New York City to be powered by wind,” London said. “I hope it comes sooner than that, but in the meantime we need to do what we can to make up for it.”

Asparro plans to continue to scale down CarbonQuest’s equipment, as well as make the already modular design more flexible. He wants to create equipment that can be installed outdoors on rooftops or setbacks, or indoors in unused areas that are less valuable than parking spaces — to improve the cost benefit for landlords.

And the real vision is to scale the system way down, like rooftop solar panels or home computers.

“Why shouldn’t a system like this be sold at a Home Depot or a Loews?” Asparro asked. “We’re just getting started, in order to realize that future.”