Venture capital funding dropped 18.5 percent this year and now hovers at $20.8 billion after the first half of 2022, Newmark says. Despite the short-term decline, this number remains higher than every full year prior to 2018. 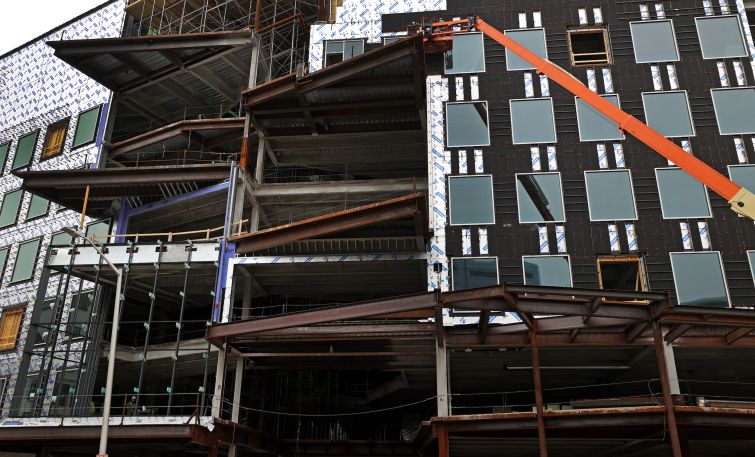 A view of 325 Binney, the future headquarters of Moderna, under construction in Cambridge, Mass., in June 2022. David L. Ryan/The Boston Globe via Getty Images

Overall investment in the national life sciences market is shrinking, but the drop in venture capital funding isn’t deterring the sector’s momentum. Pricing and activity in hub markets continues to grow, with both primary and secondary regions riding through new headwinds to get in position for stable expansion.

According to a midyear Newmark report released this month, America’s hold on life sciences reflects ongoing trends in the sector. The firm’s data shows unbroken leasing and development momentum, while simultaneously highlighting areas for growth.

“Coming off of the historically high levels of venture capital funding and IPO activity of 2020 and 2021, investment into the U.S. life science sector has slowed due to disruption in the public markets, interest rate volatility and reduced funding,” Elizabeth Berthelette, Newmark’s director of research, told Commercial Observer.

Indeed, the life sciences industry has been negatively impacted by a slowdown in funding, which soared post-COVID but is now ricocheting back toward pre-pandemic levels. In the first half of 2022, life sciences venture capital funding dropped by 18.5 percent compared to the first half of 2021 and now hovers at $20.8 billion. Despite the decline, this number still remains higher than every full year prior to 2018, according to the report.

The pace of national market activity likewise declined on a year-to-year basis. The total volume currently stands at $7.7 billion, which represents a 33.6 percent decrease from this time last year.

Despite recent economic setbacks, growth trends remain on par with normal historic averages, and the life sciences industry is well positioned for the future, said Berthelette.

Long-standing life sciences magnets Boston, San Francisco, San Diego and Raleigh-Durham are leading the way. These epicenters collectively offer more than 93 million square feet and anticipate 33.2 million square feet in upcoming renovations. With the space to back up an array of scientific companies, these four markets remain industry powerhouses.

A major factor driving the clusters’ success is the presence of lab space, often made available via conversions and creative developments. This year has perhaps created more questions than answers when it comes to the longevity of physical office spaces, fueling a hyper-awareness of the risk and uncertainty that comes with the built environment. In this post-2020, flexible world, real estate must contend with various uncertainties, but life sciences remains a sector contingent on the built environment.

However, office-to-lab conversions don’t come easily or quickly. The market is limited by a lack of suitable supply, not to mention high construction costs and precise technical knowledge and requirements, reports Newmark. Given such limitations, as well as other differences, clusters like Boston continue to lead the pack with New England’s tried-and-true life sciences ecosystem.

Meanwhile, hot spots like New York and Los Angeles — as well as Denver, Houston and Chicago, among others — remain secondary tiers, albeit ones with ample opportunities for acceleration.

Surprise, surprise: the greater Boston area remains the pinpoint for life sciences in the United States. Asking rents have increased by 6.9 percent over the course of 2022, says Newmark. These rents range between $60 and $130 per square foot.

Likewise, Boston’s lab square footage, as well as its footprint under construction and renovation, holds strong. The area’s total market spans more than 28 million square feet, thanks in large part to Cambridge; across the Charles River, more than 13 million square feet are dedicated to life sciences.

Lexington and Waltham, as well as the Seaport District, are other notable neighborhood submarkets, per Newmark. They hold more than 5 million and 2 million square feet, respectively.

Yet, as was the overall trend, Boston saw a decline in venture capital funding. It’s worth noting that while Boston remains life sciences’ top market, it trails the San Francisco Bay Area’s roughly 33.9 million square feet when it comes to overall market size.

Boston also trails the Bay Area in VC funding trends. While other clusters in the report saw a decline in year-to-year VC funding, the Bay Area’s funding actually increased by 19.3 percent. Currently, 2022 funding stands at $12.3 billion. In comparison, Boston’s current venture capital funding amounts to $6.4 billion, a 35.5 percent decline from this time last year. However, Boston has maintained a generally positive growth trajectory. Even with the bobble in venture capital funding, Boston’s 2022 funding thus far remains 75.7 percent greater than the start of 2019.

New York City has become a hotbed for life sciences discourse. The city has grappled with various barriers to growth, yet ultimately emerged as a burgeoning player in the sector. Currently, New York City’s market amounts to roughly 3.71 million square feet, with an additional 4.86 million square feet proposed. Rent costs anywhere between $85 and $130 per square foot, according to Newmark.

Like Boston, New York City has reflected a year-to-year decline in life sciences venture capital funding. Compared to the $2.7 billion raised the first half of 2021, New York City funding declined by 59.4 percent this year.

Yet even with this drop, funding in the city remains above pre-COVID levels by a whopping 63 percent. Life sciences tenant demand in New York City has also steadily increased since 2020, per Newmark’s report.

The report singled out an additional three owners headquartered in New York City. While these owners didn’t make the Top 10 national ranking, they have significant holdings, both in New York City and beyond. Nuveen owns 3.2 million square feet of life sciences space both in-use and under construction, while Clarion Partners and KKR each own 2 million square feet. (These metrics do not refer solely to these companies’ New York City portfolio but represent their overall holdings.)

Looking ahead, New York City’s life sciences growth may be stalled by a deficit of physical inventory. The report notes a lack of existing space for labs seeking graduation space; tenants hoping for buildings between 3,000 and 12,000 square feet have few options.

Life sciences in L.A. is here to stay

Perhaps HATCHspaces co-founder Allan Glass put it best when he previously told Commercial Observer that L.A. is “past the point of being an emerging market.”

Newmark’s latest data backs up this claim. Life sciences has flourished in Orange County, and the report lists HATCHspaces — as well as Cantor Fitzgerald, Lincoln Property Company and BEP Helix, among others — as emerging L.A. and O.C. developers and investors.

In recent years, the city has solidified its position as a life science hub thanks to its flourishing scientific ecosystem and workforce. L.A.’s current market amounts to roughly 11.6 million square feet. About 1.2 million square feet of wet laboratory and life sciences space have been proposed, and if developed would result in a 70 percent increase from last year’s pipeline. Lofty plans for growth are likely to expand L.A.’s life sciences activity and propel the cluster forward.

Tenant demand remains high, but L.A. continues to straddle its position as a secondary market rather than a San Diego. Like other clusters, L.A. faced an annual decline in venture capital funding; the first half of 2021 funneled $895 million toward life sciences, dropping by 29.9 percent this year. Even with this decrease, however, numbers continue to exceed pre-pandemic levels. Funding remains 20.1 percent higher than it did in the first half of 2019

As for upcoming development areas, Newmark lists the Conejo Valley, West Los Angeles, Irvine and Pasadena as the places to watch — or, rather, the places to develop.