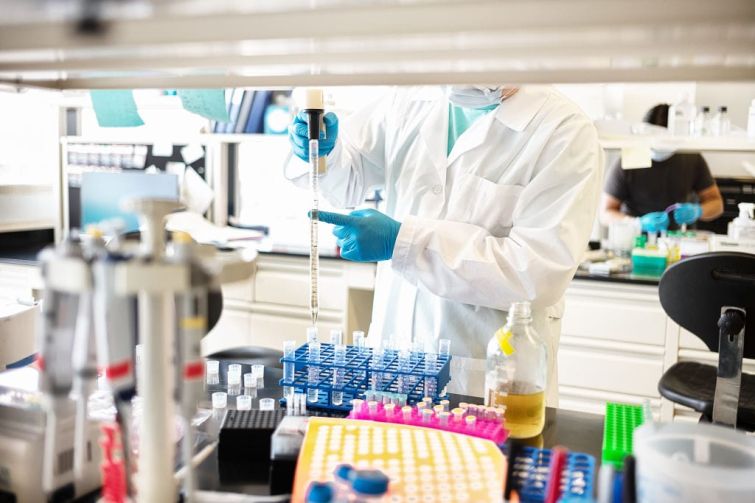 As part of the decade-long initiative, dubbed LifeSci NYC, the city will invest funds to spur the construction of more lab space and incubators, support nonprofits focused on research, and expand an internship program.

“New York City can do more than just fight back COVID-19. We can invest in fast-growing sectors like the life sciences to stop the next pandemic before it starts — and become the public health capital of the world,” de Blasio said in a statement. “This expansion will accelerate the growth of local researchers and businesses inventing the cures for whatever comes next.”

The life sciences sector — traditionally centered in the Boston and San Francisco areas — has been red-hot during the pandemic with investors flocking toward the space.

New York City’s life sciences market was growing pre-COVID but exploded last year. Leasing in the sector more than doubled between 2019 to 2020, reaching its highest level in nearly a decade, while funding from venture capital firms totaled $907 million in 2020, its highest yearly amount ever, according to a report from CBRE.

However, experts previously said the city’s life sciences market has been hindered by a lack of available lab space, curbing fast-growing companies who routinely need to upgrade to bigger digs. It’s something developers and the city have been trying to fix.

De Blasio launched the LifeSci NYC plan in 2016 with about $100 million of the initial $500 million devoted to creating a life sciences innovation hub, as Commercial Observer previously reported.

The plans also called for $300 million to be used to give developers tax abatements in exchange for building life science spaces, and $100 million split between creating internship and training programs.

As part of the new funding, the city created a $112 million fund to award $20 million in individual grants for innovation projects to develop new medicines and medical devices as well as diagnostic, material and research tools, according to de Blasio. The New York City Economic Development Corporation launched a request for proposals on Wednesday to find the companies.

The LifSci NYC plans now call to invest $200 million to support the construction of lab space and incubators, $300 million for nonprofit facilities, and $5 million each for an internship program and a fund to help early-stage companies.