The North Carolina capital, at the nexus of the wider Triangle region, has added millions of square feet of lab and office space in recent years, with more to come 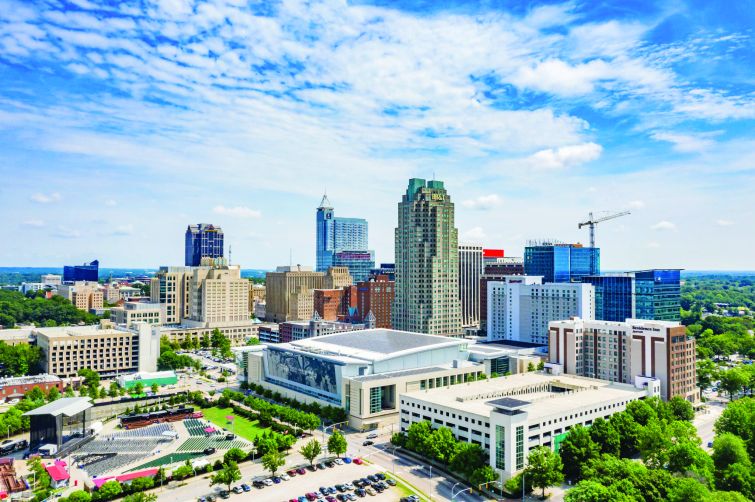 Raleigh, N.C., used to be a relatively sleepy state capital, where the center of gravity near the government offices was all about white-collar jobs and wingtips.

Today, the City of Oaks and the surrounding region, known as the Triangle, is anything but. With high-rises sprouting throughout Raleigh’s downtown and Warehouse District, startup hubs and lab conversions transforming neighboring Durham’s former tobacco warehouses, and a burgeoning life sciences sector becoming a bigger national player amid a race for lab space, the Triangle is a “supernova,” according to the latest Urban Land Institute (ULI) Emerging Trends report.

The region ranks as a national leader for investor demand and development opportunities, according to ULI, and has seen activity explode at a time when corporations are pushing to get people back into central business districts and into the office.

Avison Young found 1.9 million square feet of new office delivered in Raleigh-Durham last year, with 2.1 million square feet under construction at the beginning of the year, and leasing activity for office space up 36 percent year over year. The region has attracted 44,000 new jobs since the pandemic, just behind Austin and Nashville, with Wake County, where Raleigh’s located, welcoming just over 62 people a day last year.

“Word got out during COVID,” said Woody Coley, senior vice president for real estate development and investment company Trammell Crow’s North Carolina office. “Apple, Google, Toyota and VinFast (a Vietnamese electric car company) all announced new facilities and jobs within a few months of each other. It really does become a self-perpetuating, virtuous cycle.”

While it’s not surprising for a midsize metro in the Southeast and Sun Belt to take strides in today’s commercial real estate market, Raleigh-Durham tops peers with high educational attainment and high income in relation to housing and office costs. Downtown office rents in Raleigh just passed the $40-a-square-foot rate earlier this year, and, while housing prices shot up in the last year ($400,000 median), they’re still below Nashville ($448,500) and Austin ($639,900).

Raleigh’s real estate resurgence started, in part, with the success of Citrix (which opened a new office in the Warehouse District in 2014) and Red Hat (which opened its downtown office in 2004), two tech firms that helped expand the city’s commercial development potential. In the last decade, according to Smedes York, a developer and a former Raleigh mayor, a critical mass of investment and opportunities in a tech-centered economy fueled more high-rise development. Many big developments followed in its wake in recent years — $2 billion in projects took shape between 2015 and 2019.

The Dillon, an 18-story multi-use project in the Warehouse District by local developer Kane Realty, a powerhouse that has reshaped the city’s downtown, opened in 2018. Heritage Properties added 1 Glenwood, an office and retail tower near Union Station, in 2018, as well as Bloc83, a pair of office towers that started going up starting in 2019, both of which helped open up the Glenwood South neighborhood to more development.

Raleigh’s development boom, like so many things in the region, can trace part of its success back to the formation of Research Triangle Park (RTP) in 1959. A collaboration between the region’s academic powerhouses — Duke University in Durham, State University in Raleigh, and the University of North Carolina in Chapel Hill — the 7,000-acre site became a magnet for tech. Over time, it helped establish the region’s reputation for innovation and education (46 percent of the region’s labor force has a college degree, versus the 32 percent national average, said Coley).

RTP now hosts 50,000-plus employees working for hundreds of companies, including Cisco, and continues to expand and evolve. The 220,000-square-foot Hub, a retail-residential-lab development project by Longfellow, a national developer with an innovation focus, is set to be completed by fall of 2024.

The science and talent circulating through the area helped seed the life sciences sector. This includes massive biomanufacturing facilities and contract manufacturing organizations — including Fujifilm Diosynth’s recent announcement of a $2 billion facility in nearby Holly Springs in Wake County — key elements in biotech’s recent evolution toward high-tech cell-and-gene therapy.

“We still have great runway,” said Longfellow Managing Director Greg Capps, whose firm has 2 million square feet of lab development spread across the Triangle. “We can still develop great product at a different price point than other markets.”

The Triangle region already boasts roughly 10 million square feet of lab space. But, unlike the big three markets in the Boston area, the San Francisco Bay and San Diego County, North Carolina offers closer proximity to manufacturing and cheaper land — and plenty of it. This enables new mega-campuses to take shape along the expanding 540 Loop Beltway around Raleigh, such as Spark, a 109-acre, $1 billion development by Starwood Capital Group and Trinity Capital Advisors set to feature biomanufacturing capacity, retail, restaurants and 1.5 million square feet of lab.

“The diversity is the differentiator for us,” Capps said. “We’re going to continue to see some of those bigger manufacturing deals hit the market, as well as more diverse projects and lab space with amenities.”

The lab and science boom has been buoyed by a growing tech scene. Apple is looking to open a 1 million-square-foot campus in the RTP by next year. Google is planning an engineering hub for its cloud software in downtown Durham, and Epic Games is looking to convert an 87-acre mall in Cary, 12 miles east of downtown Raleigh, into a new campus by 2024.

Raleigh’s downtown itself continues to expand with more megaprojects in the queue. These include Downtown South — a $2.2 billion Kane Realty project set to turn a 140-acre site alongside Interstate 40 into a mix of office, hotel, residential, and even a potential soccer stadium — as well as the North Hills Innovation District, another Kane project, and twin 20-story towers at Salisbury Square, one residential and one mixed-use. Out-of-state developers see more potential, too. Manhattan-based Turnbridge Equities seeks to enter the Glenwood South submarket with the Creamery, a 32-story multifamily and 20-story commercial tower set to break ground this summer.

Part of the growth has been Raleigh’s general receptiveness to rezoning and higher-density development, said Josh Dix, principal with Trammell Crow’s mid-Atlantic office. Combined with the city’s Unified Development Ordinance, which consolidates zoning and other planning regulations, Raleigh’s growth policies make it relatively easy to build, and build fast, especially compared to more established markets. Trammell Crow currently has 400H, a 365,000-square-foot, 20-story mixed-use tower, in the works in Raleigh, with co-development partners AECOM-Canyon Partners and HM Partners. It is set to open in the fall of 2023 with 150,000 square feet of Class A office space and 242 luxury apartments.

In Durham, a number of lab conversions helped foster its own ecosystem of retail and restaurants downtown, said Dix. Duke University’s commitment to invest in research sites in the city has been an especially important accelerant, as have adaptive reuse projects like American Underground and the American Tobacco Historic District, which added substantial creative office space.  ​​

And more than a dozen sizable projects and redevelopments are underway in the former tobacco hub, including the Novus, a 27-story luxury apartment complex in the Five Points District being built by L.A.-based Austin Lawrence Partners on the site of a former bank. Longfellow will soon break ground on a new downtown lab conversion at 518 West Morgan Street, which will add 200,000 square feet of spec R&D space, and GlaxoSmithKlein just relocated downtown from its former home in RTP.

While the Triangle’s urban growth has been intense — the region’s population has doubled since 1980, and many suburbs like Wendell and Zebulon saw double-digit growth in just the last year alone  — the expansion of the wider regional economy may be just as big a story. Another area of growth in the state, the so-called Piedmont Triangle, which contains cities like Winston-Salem, another former tobacco hub, is also seeing big interest from tech firms and manufacturing, like Boom Supersonic, a high-tech jet startup, and Toyota.

Mark Owens, president and CEO of Greater Winston-Salem Inc., said firms are increasingly coordinating growth between both regions. They’re separated by maybe an hour’s drive on Interstate 40, and are “tying themselves together” and offering more growth opportunities, especially for industrial real estate, Owens said.

It’s all part of a statewide push to present North Carolina as a hub for talent and a magnet for corporate relocations. The state’s Economic Development Partnership, which helps sell companies and investors on the state, secured 174 corporate relocations last year alone, predicted to bring in 24,000 jobs and $10.01 billion in capital investment across the state.

Those numbers underscored that the workforce and the talent continue to be the magnets bringing in more development and dollars to the Triangle.