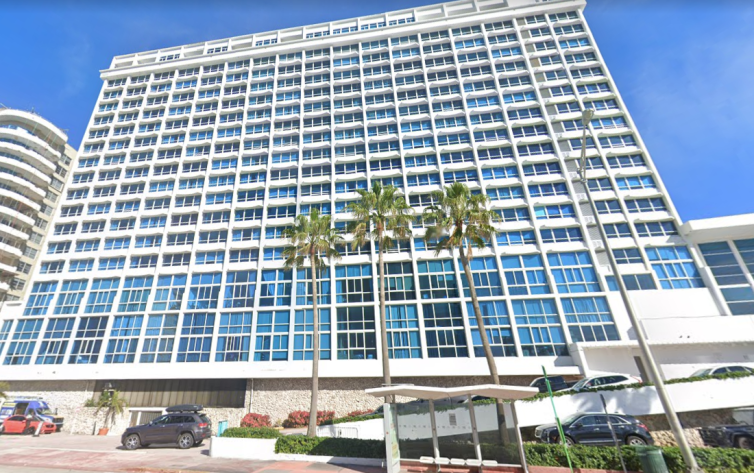 New Yorkers collectively had a feeling of WTF on Monday.

We’re not talking about “The Slap” the previous evening at the Academy Awards. (Although, yeah, like everybody else we have been obsessively thinking about the incident — Helen Holmes, at our sister publication, delved into why it probably won’t do much damage to Will Smith’s career … even though maybe it should.)

No, we were thinking about what was happening with the weather.

Suddenly the temperature is in the 20s? At the end of March? Snow coming down? What the hell was happening?!?

Well, it’s not like developers and real estate folks everywhere needed even more inspiration to think about resettling to sunny climates. …

Miki Naftali, one of the princes of the New York luxury condominium market, announced he was migrating south. The developer, along with Cara Real Estate Management, just spent $40.5 million for a developable parcel in Miami Worldcenter, with plans to build “two supertall residential towers,” spanning some 1.3 million square feet.

Not to be outdone, Related Group and 13th Floor Investments made a stunning offer of $500 million for Castle Beach Club, an oceanfront condo at 5445 Collins Avenue, poised on 576 linear feet of Miami Beach, which would be the most expensive South Florida sale of the year so far if it happens. (Before it can go through, though, the deal requires approval by a majority of the 570 owners in the complex.)

Related has good reason to be bullish. The company had offers on all 343 of the fully furnished units in its planned ready-to-rent condo in West Brickell called District 225 that it’s building with Airbnb in a mere five months.

Speaking of firms called Related, it was also revealed last week that New York’s Related Companies is partnering with Swire Properties to build an 80-story, 1,040-foot-tall office building, dubbed One Brickell City Centre, which, if approved, would be one of the tallest skyscrapers in Miami.

But to be sure: there was residential activity beyond the Relateds. GID dropped $149.8 million on a 385-unit complex in Doral at 8425 NW 41st Street in a purchase from Greystar Worldwide.

And in Fort Lauderdale’s Flager Village, the California-based Thomas Tomanek & Associates spent $195 million on Motif Apartments, which comprises 385 rental units at 500 N Andrews Avenue, which they bought from Bluerock. (Gee … Jay Shidler’s $108 million buy in Fort Lauderdale almost feels like a let down.)

Of course, it wasn’t all monster sales; there was certainly one equally colossal lease.

We’re talking about FedEx signing a 501,000-square-foot lease at Miami27 Business Park. The delivery company needed a space with “access to major highways, proximity to customers’ distribution centers and a strong local community workforce for recruiting employees,” according to a spokesperson for FedEx.

Florida isn’t the only hot environment out there

It was kind of a crazy week for Los Angeles too.

On Monday, Don Peebles and Victor MacFarlane’s proposed 1.2 million-square-foot Angels Landing high-rise finally secured entitlements from the city. When finished, the years-in-the-making project in Bunker Hill will consist of the third-tallest building in L.A., at 854 feet, and feature two hotels, condominium units, rentals, retail, restaurant space and a park.

In Chatsworth, Rexford Industrial Realty spent $42 million for 231,769 square feet of flex office space with plans for an office-to-industrial conversion.

And there was not one, but two notable deals for the sports nut in all of us:

The L.A. Chargers secured $276 million in construction financing from CTL Capital for a new corporate headquarters and training facility that is being developed by Continental Development Corporation and Mar Ventures.

And it was discovered that Nike was expanding by 93,166 square feet  at its Water’s Edge campus in Playa Vista, bringing Nike’s total footprint at the building, WE3, up to 183,000 square feet, i.e., the entire four-story office. (OK, that’s not technically sports — it’s sports apparel. But you get the idea.)

The city that never sleeps might have insomnia because it’s actively transacting all the time.

There was a lot of FiDi activity in general last week (and we don’t just mean the Battery Park City Authority’s carbon neutrality plan, although there was that). Reside Health, a venture-backed startup that offers medical services and COVID-19 testing to office employees, is opening its third clinic at 4 World Trade Center. A few steps away, Celonis, the data processing firm, took an additional 40,763 square feet on the 70th floor of 1 World Trade Center, which brings the tower up to 95 percent leased (higher than it was before the pandemic, according to the landlord.)

And Harry Macklowe has gone looking for about $1.1 billion in refinancing for 55 Wall Street, his chichi Art Deco condo conversion.

Alas, we didn’t see the same sales and development plans revealed that we did in L.A. or Miami this week.

On some level, New York is still grappling with its office space problem. For the secondary office product out there, it’s not a problem with an easy (or cheap) fix. But some landlords are thinking about their B and C product creatively. They could be converted into flex office space, for example. (Speaking of flex space, last week Sandeep Mathrani was offically named chairman of WeWork, replacing Marcelo Claure, who left months ago. Mathrani has also been in the CEO role since 2020.)

But there are a lot of things to get a cup of coffee and think about in terms of New York’s office stock.

One question that has been coming up more lately is: Who owns your office data?

A lot of offices now track everything from foot traffic, to how often the bathroom is used. Does it feel creepy that the boss is keeping these tabs about you? Or is it the building that’s compiling this data? Or is it someone else entirely?

It’s a good question to ponder this Sunday.