Data in Office Buildings: Who Owns It?

Buildings are smarter than ever. Who owns all the data that’s collected and mined? 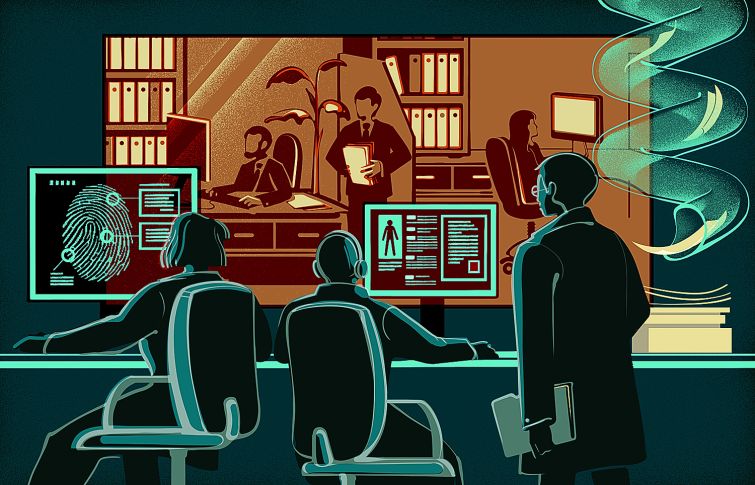 Ever since the advent of personal computers more than 40 years ago, there has been a concern that every keystroke and every move of a mouse or a cursor might be recorded somewhere for some technology firm to learn more about you than you might want them to know.

Even now there are concerns over spooky emails you might receive from some strange firm that somehow knows it’s your birthday, or that you spent a little time online looking for refrigerators.

As computers have spread throughout the workplace, so has the paranoia. Your employer and their HR department can know what time you clock in and out, what you are doing on your computer and when, and who you’re talking to on your phone. There are cameras there, too, ostensibly to catch and dissuade criminals, but those could be used to monitor your whereabouts. After 9/11, when companies placed more of a premium on security, there was even more of that.

Now, as we move — hopefully — from COVID-19 to post-COVID-19, commercial real estate owners and management companies have joined the fray. They are collecting more data than ever, raising questions of who owns it and what they can do with it. The data mining is not necessarily to track the efficiency of a workforce, though, as it might be for the companies doing the tracking.

There’s the all-important question of just how much office space a company might want or need next time a lease comes due, now that some percentage of staff has learned to work from home or otherwise remotely, that people who might have been commuting to the office five times a week might reduce that number to three or two — if they come in at all. Or maybe a company won’t even wait for the end of the lease, and just test the sublease market with whatever space it deems surplus. Why guess when you can know?

As a result some landlords are using third-party research firms such as Placer.ai, a major source of foot traffic data for retailers, and Kastle Systems, creator of the Back to Work Barometer that both the press and real estate have been using to measure the level of worker retention city to city. Landlords, like Taconic Partners, famed for repositioning the vast onetime industrial building at 111 Eighth Avenue, now Google’s New York headquarters, as high-end offices, are keeping track themselves.

So far, at least, the firms and the landlords say the data they collect is anonymized enough so that nobody has to worry that yet another party knows too much about you. In general, the data itself is co-owned by the provider — that is, the firms collecting the data — and their client (in these cases, the building owners).

“In the pre-COVID workplace, you had relatively little privacy to enjoy there, and a great deal of data capture, of being observed or monitored within the workplace,” said Lee Tien, legislative director and Adams chair for internet rights at the San Francisco-based Electronic Frontier Foundation. “That has changed a little as we, maybe like you, work from home. But the tether is always there. Employers know things about their employees.’’

In recent years, office buildings have gotten “smart,” he said, with “a lot of built-in surveillance.” Some of this is done for temperature or climate control, as governments put more pressure on landlords and tenants to reduce real estate’s carbon footprint. Some of it is done simply to track occupancy or the usage of particular amenities or services.

Asked if assurances that anonymizing data was enough to protect individuals’ privacy, Tien said that the information these services are providing does not need to be particularly granular.

So far, the battle over privacy at work is between employee and employer, said Jay Stanley, senior policy analyst for speech, privacy and technology at the American Civil Liberties Union (ACLU).

“There are issues around employers and others who want to track employees for environmental reasons and the like, by affixing sensors to employees as they go throughout their day, measuring anything from air quality to physiological measurements,” he said. “Generally our view when it comes to workplace surveillance is that employees and employers have legitimate interests to insure efficiency and productivity, but a lot of times we see electronic surveillance goes well beyond legitimate management concerns, and becomes either a tool for spying on employees and, in some cases, becomes so prevalent it creates an atmosphere of intimidation. Any time you collect data about people, you create issues.”

In Illinois, the civil liberties union is suing Clearview AI, which bills itself as the world’s largest facial recognition network, with more than 3 billion facial images that “destroy privacy,” in the ACLU’s words. In its answer to the ACLU lawsuit, Clearview says it collects photos that can be found on the public internet, where there is no reasonable expectation of privacy. On its website, it displays an array of police badges, saying it provides its data “to investigate crimes, enhance public safety and provide justice to victims.”

It’s not a place commercial real estate wants to go. And, yet, the question of just how well-utilized offices will be once COVID is out of its hair is compelling enough that some landlords want to mine as much data as they reasonably can.

“There is a great deal of uncertainty out there as to how things are going to play out,” Bendit said. “It’s only just now that people are starting to feel more comfortable going back to the theater, going back to enclosed spaces.”

When you develop a building, you are trying to project what the market will want in three years, on the assumption that that’s when you will be done, Bendit said.

Placer.ai is a Los Altos, Calif., company that offers granular data for retailers on their customers and their in-store habits, such as the foot traffic around certain displays and how certain outlets perform against their competition. The point of their products is to allow a merchant to more thoroughly understand each item they sell and its level of appeal, not to pry into the personality of the buyer, said Ethan Chernofsky, the company’s vice president of marketing.

That takes raw data to the next level, he said. It lets a client not merely to know the value of its product, but to make the data accessible to everyone in the company, allowing them to crunch it and create even more value, or what Chernofsky called “an empowerment tool.”

Privacy “is the central question many firms are asking right now,” Chernofsky said. “For us it’s a little bit easier, because we only launched in 2018. Our data architecture has always been developed with privacy in mind. We anonymize and aggregate as it is collected and provided to the client. What I sacrifice in some cases in some of the accuracy, I gain in the privacy orientation.”

“There are ways to get around” individualizing data, Chernofsky said. So, a Starbucks outfit, just to name one brand, knows — without having to know specific identities — what kinds of coffee 30-year-old mothers want versus what 24-year-old women without children and just out of college want.

“There is no privacy issue,” said Mark Ein, chairman of Kastle Systems, which in addition to publishing the widely quoted Back to Work Barometer — which tracks how much of the workforce in 10 major cities has returned to the office as well as a cobbled-together share for the 10 cities combined (39.5 percent as of March 22) — also gives information to individual landlords based on security card swipes or utilization of a building’s app.

“It’s not individualized,” he said. “It’s all aggregated.”

Jonathan Mechanic, chairman of law firm Fried Frank’s real estate department, said it might be premature to be concerned about legal issues posed by landlord data collection. There has definitely been a “move to quality,” with tenants seeking out the newest high-rent spaces, such as at Hudson Yards or at One Vanderbilt, that might entice people to want to commute to work, he said; and owners of Class B and C spaces would have bigger, more immediate concerns, like whether to do retrofits or incorporate new amenities.

“What you have today doesn’t tell you what it’s going to be like in two or three months,” Mechanic said. “If you’re going to track the data over a year, and it was 20 to 30 percent [returning] for the next year, that would tell me something. But telling me it’s 20 to 30 percent for the next month doesn’t tell me anything. I certainly wouldn’t base a business on that.

“Landlords are making their own decisions, I’m just telling you what I see. Someone who sells based on that decision will have created value for the guy who’s buying.”