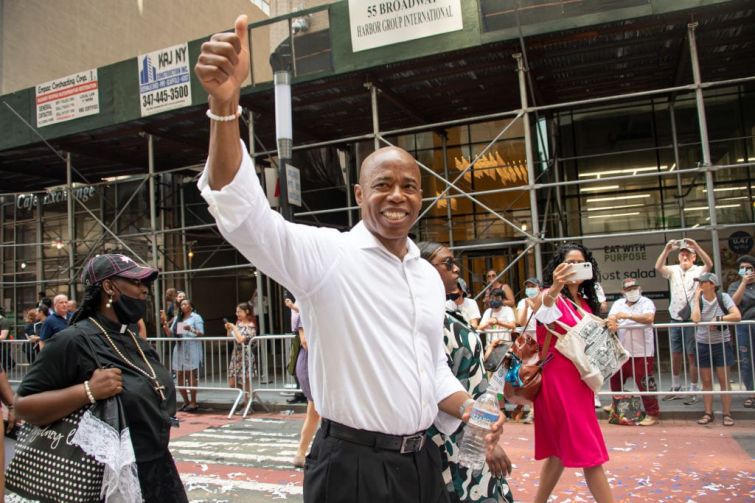 Eric Adams is six months away from likely moving into Gracie Mansion, and the real estate sector couldn’t be happier.

“He was definitely one of the preferred candidates, along with [former Department of Sanitation commissioner] Kathryn Garcia,” one Manhattan developer said. “There’s an appreciation for Eric’s position in the industry, and he’s demonstrated a track record of working well and being an honest broker for the land use role that he has had as a borough president.”

If Adams wins his general election matchup with Republican nominee Curtis Sliwa, who remains a heavy underdog in a city where Democrats outnumber Republicans nearly 7 to 1, he’ll inherit a litany of challenges that grow by the week.

The city remains scarred from more than 33,000 deaths during the pandemic. Unemployment in New York City remains just below 11 percent. Tourism revenue may not rebound for another four years. One-third of New Yorkers don’t expect to return to the office after Labor Day. And the city is in the midst of a crime wave this summer that may have swung the election in Adams’ direction.

Improving public safety and helping the city recover will almost certainly be Adams’s top priorities once in office.

“Eric is going to be a mayor who understands the importance of quality of life, fair and just policing, and growth to create opportunities for all New Yorkers,” Industry City CEO Andrew Kimball said. “I’m very hopeful he will bring a focus that embraces growth and partnerships with the private sector. He’s going to be the kind of mayor that has an open door and an open mind to development.”

Real estate leaders also expect the next mayor to grapple with the city’s housing scarcity, its fundamentally unequal property tax system, and the inexorable threat of climate change. A controversial affordable housing tax credit, 421a, is set to expire in June 2022. Heavy fines for buildings that violate Local Law 97, a provision regulating greenhouse gas emissions, kick in starting in 2024.

But, Adams starts with the advantage that he is not his predecessor. Business leaders who can’t stand de Blasio have welcomed Adams’ more conciliatory approach toward property owners and the city’s large employers.

“Adams has always been fair to landlords as a public leader, especially small landlords,” Dov Bleich, managing director of Tri State Commercial Realty, said. “He recognizes that they are humans as well, trying to make a living and pay the bills. The hateful rhetoric from Mayor de Blasio toward landlords was very divisive.”

“Eric is not as shy in dealing with the real estate community as Bill de Blasio was,” Sid Davidoff, founding partner of government relations firm Davidoff Hutcher & Citron, said. “He’s probably learned how important it is to get into the community and consult with them earlier in the process.”

Brooklyn’s real estate power brokers have gotten to know Adams intimately and have been happy with the results.

Adams has championed City Point Brooklyn, a shopping and residential complex in the heart of the Fulton Street corridor, and backed the de Blasio administration’s contentious plan to de-map 40th Street to expand Industry City (which later faltered). He also signed off on Industry City’s long-in-the-works rezoning, which its developers later pulled after opposition from some local politicians.

The borough’s most powerful developer, Two Trees Management, needed Adams’ help to put forward its plans for artificial turf at Domino Park and residential high-rises at the former Consolidated Edison site in Williamsburg, and hired lobbyists and PR execs to get the point across. Public hearings for the River Ring project began in April and Adams hasn’t approved the proposal yet. (The firm’s employees and Walentas family members gave $17,800 to Adams’ campaign, and a family-controlled foundation directed between $25,000 and $80,000 to an Adams-affiliated nonprofit, according to The City.)

Other property owners have found Brooklyn Borough Hall to be a receptive arena for large-scale development projects, especially in commercial areas. RXR Realty hired Suri Kasirer in May 2019 to lobby Adams regarding a 34-story apartment building and academic facility at 196 Willoughby Street on the Long Island University campus. The company also contributed $10,000 to Adams’ nonprofit, although it remains unclear what role Adams played in the project’s advancement. Adams’ spokesman told The City that the building did not require a zoning change.

Those who know Adams well say people should expect to see him more frequently at their galas, ribbon cuttings, and luncheons in the coming months and beyond.

“He’ll surprise people with his work ethic. He has the ability to be everywhere and I expect him to be everywhere in town,” said one Brooklyn real estate source. “This is going to be a mayor who drops in on five, six things a night. No event is too small.”