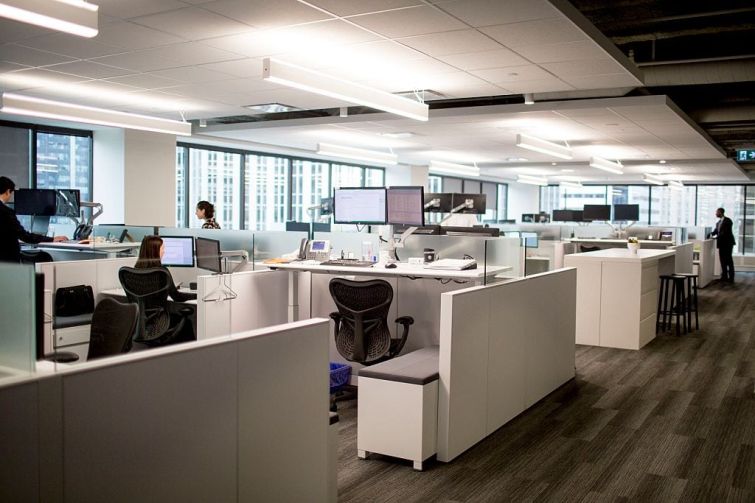 Manhattan workers’ post-Labor Day plans will likely include a trip back to the office.

Businesses expect 62 percent of their workers to return to in-person work in September, according to a new survey from the Partnership for New York City, a business booster group.

While that’s up 17 percentage points from a survey in March, the report still shows that 1 in 3 Manhattan workers won’t yet be returning to the office. And, for those 62 percent expected back, they will only be in for three days a week.

The survey, which focused on companies located in Midtown and the Financial District, cites the pace of vaccinations in the Big Apple as one of the reasons more employers are confident about a return to work. Nearly half of New York state’s population has received both doses of the vaccine, and more than 1.5 million city dwellers have received their first dose, according to the state’s vaccine tracker.

But employees and policies to protect against the coronavirus are guiding employers to adopt a hybrid work model, where not everyone is in the office five days a week, according to the survey. About 71 percent of employers plan to adopt a rotating office schedule, and, of those using the hybrid model, 63 percent will require employees to be in the office three days per week.

But the estimates are a far cry from the current reality. Only around 12 percent of workers have returned to the office as of May, up just two percentage points from March, according to the survey.

There’s still a large number of workers who don’t want to return to the office by September, and a recent survey found that 39 percent of people would be willing to quit their job rather than give up remote work.

The majority of employers, 84 percent, reported that concerns over public transit safety have presented an obstacle to a return to office work. But the main factor in determining a return to the office was the status of the pandemic, followed second by vaccination rates.

Crime and public safety ranked as the fifth top concern for a reopening, followed by school reopenings and the availability of child care.

Most industries increased their expectations of office occupancy, but tech companies, which have been a major driver of Manhattan office leasing, stood out as the exception. Tech employers expect the fewest employees — only 40 percent — to return by the end of September, down from the 51 percent in the Partnership for New York City’s March survey.

Twitter decided to allow its employees to work from home permanently last year, while others have adopted a flexible work schedule. Google is planning a three-day-a-week office work schedule and Facebook will open its Manhattan offices on July 12 at 25 percent capacity. The social media giant has called its offices vital for the employee experience.

Financial services employers expect a greater return to work, predicting that 61 percent of employees will be back in the office by the end of September, up from an estimate of half in a March survey. In early May, JPMorgan Chase called its U.S. employees back to the office for a July return.

Vaccination against the coronavirus wasn’t a requirement for JPMorgan Chase employees’ return, and neither is it for most employers surveyed by the Partnership for New York City. About 72 percent of employers will not require returning employees to get vaccinated; though, of this group, 22 percent said they will actively encourage vaccinations.

About two-thirds of employers also will not require a negative COVID-19 test for employees who return to the office, unless an employee exhibits coronavirus symptoms or had a recent exposure to someone who had the virus, according to the survey. Only 13 percent will require regular tests for unvaccinated employees.