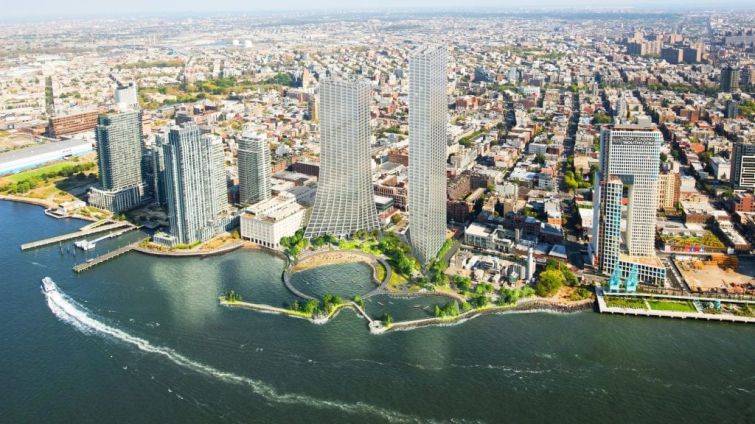 Two Trees Management’s controversial plan to build two residential high-rises and a waterfront beach on the site of a former Consolidated Edison plant in Williamsburg, Brooklyn, will get its first public hearing next month.

The 1.3 million-square-foot project, which has been in the works since December 2019, relaunched in February as “River Ring.” Designed by starchitect Bjarke Ingels and James Corner Field Operations, the development will include 1,250 apartments (313 of which would be income-restricted), a 50,000-square-foot YMCA with a pool and an indoor track, 60,000 square feet of offices and 23,000 square feet of retail. Two Trees also plans to build a three-acre public park and a 250-space parking garage.

Two Trees’ project has faced opposition from local group Sustainable Williamsburg, which argues that the lot remains one of the last spots for manufacturing in the area after most of the waterfront was rezoned for residential use, the Brooklyn Paper reported.

The 400,000-square-foot development site stretches from North 1st to North 3rd streets between River Street and the East River. It is also a block away from Two Trees’ other Williamsburg mega-project, the redevelopment of the Domino Sugar Refinery properties. River Ring’s public waterfront will connect with Domino Park, which stretches for a few blocks along the riverfront portion of the former sugar factory site.

Two Trees and its architects will present their proposal at an online Department of City Planning scoping meeting on April 26 at 2 p.m. The developer will need a slew of zoning changes for the project, including a rezoning that would allow a high-rise, mixed-use residential project to be built on the property that’s currently zoned for manufacturing uses.

The development firm hopes to begin the seven-month-long public land use review in June, and complete it in late 2021 or early 2022. The local City Council member will have the final say over the project. But it’s unclear who will replace current Councilman Stephen Levin after he is term-limited out of office at the end of the year. All eight candidates running for the seat signed Sustainable Williamsburg’s letter opposing the development last October, according to Brooklyn Paper.

If approved, construction is expected to begin at the end of 2023 and finish in 2027.