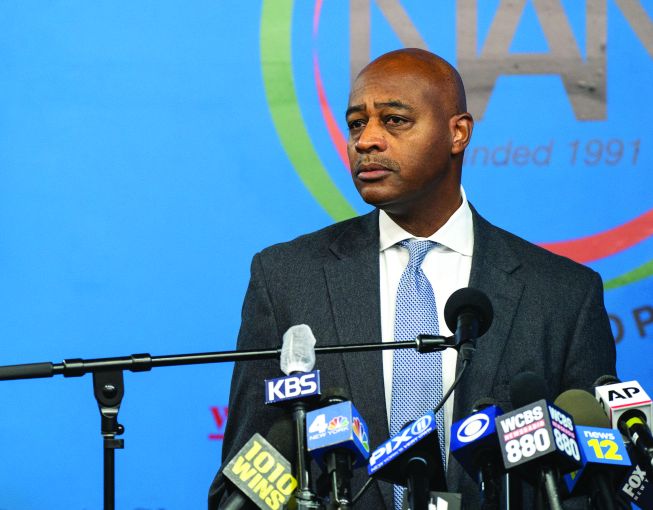 When Ray McGuire announced he would run for mayor in October, enthusiasm began to spread among the city’s masters of the universe and hustle-economy winners.

The former Citigroup executive boasted a compelling backstory and a powerful network of financial titans, Harvard alums, and cultural leaders in his corner. His friend Spike Lee directed his campaign kickoff video, a three-minute joint showing McGuire jogging Rocky Balboa-like through a depopulated Times Square, while Lee recounted in a voiceover the pandemic-ravaged horrors that New Yorkers endured over the past year.

“People are asking, ‘Is this it? Is New York over?’ We have an opportunity to rebuild, and that starts with who is leading our city,” Lee said. “And, in the fight for racial justice, we need someone who lives that fight every single day. We need a mayor who brings us together. We need Ray McGuire.”

The campaign spigot began to flow, too, allowing the McGuire campaign to opt out of the city’s generous public matching funds program. He hauled in $2.3 million by early December, and more than tripled that amount with $7.3 million by April, with another $4 million plowing into his super PAC.

New York’s donors, often contacted by philanthropist and Whitney Museum trustee Laurie Tisch, opened their pocketbooks. Some, like Ken Langone, an investor and Home Depot co-founder, raved to CNBC: “I like what he’s talking about doing. I’m especially excited about how he feels about public education.”

His most important political endorsement, Queens Congressman Gregory Meeks, came the same weekend. McGuire has also far outspent his opponents at this stage of the race, with $1.2 million going toward campaign ads, while his political action committee splurged another $1.7 million.

McGuire trails a lead pack of Democratic mayoral hopefuls that has bunched together through six months of campaigning ahead of the party’s June 22 primary.

In the city’s new ranked choice voting system, voters can pick as many as five candidates for mayor and other city races. In order to win, candidates must secure a sizable number of first-place votes, while also appealing to constituents outside their base in order to capture a plurality.

McGuire was the first choice of only 6 percent of Democratic primary voters, tied for fifth place, and just 32 percent of voters knew him, while 26 percent remained undecided, according to an April NY1/Ipsos poll. Other polls show as much as half of the electorate hasn’t picked a candidate, although McGuire has improved his name recognition with more voters, up from 25 percent in January to 38 percent in a March Fontas Advisors/Core Decision Analytics (CODA) poll.

With only two months left, the marathon mayoral race will become a sprint.

“People recognize that we need something different, that we need change, and I’m getting that in a resounding response from New Yorkers,” McGuire told Commercial Observer. “They’re looking for someone who has a vision, is not a career politician, and doesn’t owe anybody anything.”

Ray McGuire’s most significant challenge toward emerging from the pack over the next two months is who else is in front of him.

With a message of revitalizing and rebuilding the city’s economy, the longtime Wall Streeter hoped to appeal to both real estate and finance industry leaders and outer-borough working families.

But Brooklyn Borough President Eric Adams, only four years younger than McGuire, has made a play for the same cohort of voters by railing against the city’s rising cost of living due to gentrification. Adams has also promised to prioritize a crackdown on guns and improve public safety, which worsened during the pandemic — one of the top concerns of the city’s executive class.

Adams has sought to contrast his 14 years in politics and 22 years in law enforcement with his rivals, and position himself as the most qualified candidate to tackle crime. But his most recent campaign catchphrase, “I’m not new to you, I’m true to you,” seems designed to needle McGuire, who has never held public office before.

Voters may end up choosing both candidates in ranked choice voting, but 13 percent of voters say they would rank Adams first, more than double McGuire’s share, the NY1/Ipsos poll said.

“Ray is compelling, funny, engaging, and can make you feel like you’re the center of attention,” said one real estate leader who likes both candidates. “Those are good political skills, but he’s not getting traction. He’s sharing a lane with Eric Adams and it’s hard to elbow Eric out.”

McGuire has also had to contend with the emergence of tech entrepreneur Andrew Yang, who has spurred enthusiasm from millennial and Gen-Z voters after a whirlwind presidential run in 2020.

Yang’s spontaneousness on the trail — he was one of the few candidates to hold in-person campaign events this winter — and an unorthodox platform that includes offering a universal basic income for the city’s poorest residents, helped separate him from career politicians in the race. Yang currently leads several polls and is the first choice of 22 percent of voters, according to a NY1 poll.

“I would really focus on executive experience. Now is not the time to have somebody’s first major leadership job be the mayor of this city,” McGuire said. “I’ve managed budgets larger than most cities. You need somebody who has a proven track record of managing businesses.”

But McGuire hasn’t been able to satisfy voter hunger for an energetic political outsider in the race, which Yang has filled.

“A lot of people are taking Yang at his word that he was an out-of-the-box, unconventional entrepreneur who found creative solutions to longstanding problems,” a second real estate source who is considering supporting McGuire said. “The reality is Ray has experience at the very highest level in terms of major decision-making with real impacts.”

There may be larger structural challenges that a new campaign ad won’t fix.

Part of that reason is that Democratic primary voters may not want an individual from the finance industry to lead the city, no matter how qualified they are.

“It could be as simple as people’s appetite for bankers to lead the city in 2022 is really low,” the second real estate source said. “Profession is one of the things that’s near the top of the list in a prospective voter’s decision-making process, and ‘banker’ just turns a lot of people off in this stage in New York’s trajectory.”

The last time the city elected a titan of Wall Street was in 2001, when Michael Bloomberg, running as Republican, assembled a coalition of conservatives, unaffiliated voters and Latinos to edge Democrat Mark Green 50 to 47 percent.

But the electorate has changed significantly since the Bloomberg years. Voter enrollment in the city has soared by 630,000 since 2016, with Democrats accounting for roughly two-thirds of that increase. In the last year alone, more than 88,000 voters, who were either unaffiliated or Republicans, joined the Democratic Party, a Prime New York analysis found.

And the city’s Democratic voters are more liberal than they used to be, having ousted centrist state senators who belonged to the Independent Democratic Conference in 2018 and a handful of moderate, longtime state Assembly members in 2020. They also elected perhaps the nation’s most famous progressive, Alexandria Ocasio-Cortez, to Congress in 2018.

McGuire didn’t fight those battles, but he isn’t weaving themes that animate the city’s activist left, such as defunding the police or canceling rent, into his current campaign either. Instead, he has said that he would help New York recover by leaning on his relationships with the city’s business community.

“I am pro-growth. We need to grow our way out of this,” he said. “I would use my personal currency to talk to the business community and high taxpayers to let them know we need them here.”

After the city suffered a year of enervating illness, severe unemployment, stark financial losses, abrupt school disruptions, and the complete shutdown of the hospitality and leisure industries, voters are demanding a candidate who can explain how to nurse the city back to health.

“He’s not taking off because he doesn’t fit the moment,” Hank Sheinkopf, a veteran political consultant, who is not working with a mayoral candidate this cycle, said. “He can’t tell people how they should feel. He has to tell them why they should feel the way he’d like them to feel.”

McGuire still has time to make an emotional connection with voters and emerge from the pack.

Sid Davidoff, a founding partner of Davidoff Hutcher & Citron and an adviser to former Mayor David Dinkins, believes McGuire must speak to how he will bring the business community back and strengthen public schools.

“You speak with people who are middle-aged with jobs and they’re really concerned about the future of the city,” Davidoff said. “It’s about safety, education, and economy. He doesn’t have to be a genius to figure that out. Ray has a lane that he can own if he does it right.”

Other political observers believe McGuire must highlight his opponents’ weaknesses, particularly Yang’s, and not worry about running a negative campaign. With an endless schedule of online forums and few opportunities for head-to-head debates, McGuire may have to take to the airwaves to make his points.

“Yang is taking a lot of air out of the campaign and Ray has to take him on directly,” Sheinkopf said. “He has to say where we are today, what we need to be, and who can best do it. He’s got to be combative. No more Mr. Nice Guy. This is the time to get out there, and say who you are and why.”

McGuire can take solace in the fact that polls can change quickly. At this point, eight years ago, Christine Quinn led the Democratic primary field with 28 percent of the vote, followed by Anthony Weiner with 15 percent, and Bill de Blasio with 11 percent, an April 2013 Quinnipiac Poll showed.

“The leading candidate today is undecided,” McGuire said. “We are aggressively pursuing undecided, and undecided is coming our way. I have just talked with undecided. I know where they are. And many decideds are changing. It’s wide open.”