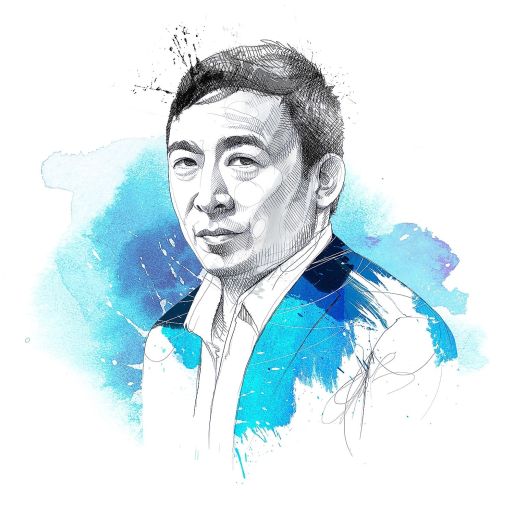 In the 30-second spot, Yang pumps his fist on a strip of Chinatown, strolls along the Coney Island boardwalk, shimmies with a Brooklyn drumline, and meets Mets fans outside CitiField in a lively montage that encapsulates his campaign.

“People give me hope,” Yang says in a voiceover as the ad plays. “Essential workers, food entrepreneurs, the kids in our schools. They are why I’m running for mayor.”

The tech entrepreneur and former presidential candidate raced to the front of a crowded field over the past six months, despite lacking a political constituency, relationships with the city’s power brokers, or even a history of voting in local races.

Few in the real estate industry had ever heard of him before his whirlwind 2020 presidential campaign in which he qualified for a Democratic debate, and outlasted both Bill de Blasio and Kirsten Gillibrand’s bids. Developers and brokers skipped over Yang and opened their wallets instead for more familiar candidates like Brooklyn Borough President Eric Adams, Comptroller Scott Stringer, and former Citigroup executive Ray McGuire.

As Yang tweeted and greeted voters in person over the winter, while his rivals largely stayed at home, voters embraced his enthusiasm for helping the city recover from the pandemic’s devastation.

“To some extent, the jury is still out with Andrew Yang, but he’s caught on to what we need a good dose of, and that’s boosters for the city of New York,” James Patchett, CEO of A&E Real Estate and former president of the New York City Economic Development Corporation, said. “There have been a lot of headlines questioning the future of the city and it’s nice to have someone out there talking about what a great city this is.”

But the race has begun to tighten as more voters have started to pay attention to the election.

In a survey of likely Democratic voters commissioned by another citywide candidate, Adams was the first choice of 21 percent of respondents, while Yang was the top choice of 18 percent of voters, followed by Stringer with 15 percent. Another poll conducted at the same time found that Yang had a 26 to 20 percent lead over Adams among likely Democratic voters, while a mid-April NY1 poll showed Yang had a nine-point lead.

Another wrinkle that has made this year’s primary more unpredictable than ever is that voters have an opportunity to select up to five candidates and rank them in order of preference, thanks to the city’s new ranked-choice voting program.

Even though Yang and Adams appear to be the top choices of two out of five voters, the race is still extremely fluid, especially after Stringer faced an accusation of sexual harassment last month. Suddenly, real estate leaders are giving their least well-known candidate a more serious look and trying to determine whether they can work together if he wins.

“A lot of them are going to feel that anything is better than what we have,” Hank Sheinkopf, a veteran political consultant, who is not allied with any mayoral candidate, said. “Do they know enough about him to make a decision? Likely not. Do they feel they have an opportunity to be heard by him? Yes. But what does anybody really know about this guy? Nobody knows anything.”

(Yang declined an interview request through a spokesman. The spokesman directed CO to the candidate’s housing platform, which includes overhauling the city’s property tax system and raising taxes on vacant land to encourage development.)

So far, Yang has made a good first impression on many owners, contractors and brokers.

He has gotten a welcome reception in Zoom calls with Real Estate Board of New York members, who described him as “open-minded,” “thoughtful” and “non-ideological.” And construction managers have embraced his willingness to put economic growth and new housing at the top of his agenda.

“He’s made it very clear he’s pro-growth and pro-development. That’s a very good starting point for someone running for mayor,” Carlo Scissura, CEO of the New York Building Congress, a trade association that represents construction industry members, said. “The last few years, a lot of developers have felt demonized by some elected officials — so when you hear Andrew Yang say he wants to work with everyone, including the real estate community, rather than paint the industry as an enemy, that’s very refreshing.”

Some developers who had conversations with Yang and his campaign team earlier this year said they were surprised that Yang could converse competently about property taxes, affordable housing tax credits, and area median income levels, which determine eligibility for below-market rate units.

“He has a better-than-you-would-expect understanding of the tax system and the market,” one developer, who is an influential voice within REBNY, said. “He’s not encumbered by the closed-minded thinking on the real estate market that’s championed by the housing advocates, so that’s an advantage.”

Yang could be benefiting both from low expectations and, paradoxically, not needing to rely on the industry for financial support. He has raised more than $2 million in contributions from a mix of tech industry leaders, small-business owners and the self-employed, with comparatively few donations from real estate. The only developers who forked over the maximum of $2,000 were the heads of Hudson County, N.J., firms Ironstate Development and Panepinto Development. Neither returned calls for comment.

But Yang is also winning support among those who don’t want to see a more progressive candidate run away with the race. Craig Deitelzweig, CEO and president of Marx Realty, said he appreciated how Yang, whom he described as a “fresh thinker,” expressed frustration with the slowness of the school system’s reopening amid the pandemic and blamed the United Federation of Teachers for delays.

Eric Benaim, CEO of the Long Island City brokerage Modern Spaces, put Yang in his top three with Adams and McGuire. He cited Yang’s support for the River Green Power project, a green energy plant on a Queens waterfront site near where Amazon wanted to put its headquarters, as a point in Yang’s favor.

“I’m going to have to see who has the better plan in bringing back New York,” Benaim said. “The socialists don’t want anything there. The fact that he came in support of that project, for me, at least, it shows he’ll be a positive force for my industry, which is a good thing.”

To others in the real estate industry, Yang’s fresh-faced perspective and lack of governing record is a liability.

A year into a global pandemic has put the city at a crossroads. Its unemployment rate was 11.7 percent in March, among the highest in the country. The city has a $5.3 billion budget gap, due to property tax revenues declining by $2.5 billion, while costs rose $5.9 billion in the pandemic.

Meanwhile, its hospitality and leisure industries remain stalled, and a rise in shootings and murders are threatening the city’s recovery.

Yang has articulated plans to rein in municipal spending, revive live entertainment, and curb violent crime. But some executives want a leader with more practice managing a crisis.

“It’s scary in the current environment [to elect someone] who doesn’t have experience [in public service]. We basically tested that out with Donald Trump,” one commercial real estate executive said. “Not having someone that has had the experience of managing big bureaucracies, who had fiduciary stewardship of something big, I don’t think we have the luxury.”

Yang’s housing policies have alienated some advocates who prefer left-leaning candidates. One affordable housing leader was so unimpressed with Yang’s grasp of housing policy in a virtual forum, that she urged a CO reporter to profile former sanitation commissioner and mayoral candidate Kathryn Garcia instead.

Yang’s history, too, of working in the technology sector and his aggressive stance toward teachers’ unions in New York could cost him votes in the Democratic primary, although he has stated support for the union drive at Amazon. His close association with Bradley Tusk, a venture capitalist who is managing Yang’s campaign, has also raised eyebrows. Tusk has vowed not to lobby Yang if he were to win.

“Lots of people are scared of a Yang candidacy. He certainly doesn’t have an established record of support on labor issues,” one labor leader said. “That kind of skepticism and him being an unknown are why you don’t see unions lining up for him.”

New York voters have picked political outsiders for mayor before. Mike Bloomberg ran a multinational, financial software and media company; Rudy Giuliani was a federal prosecutor; and Ed Koch was a little-known Greenwich Village congressman before they won.

With so many undecided voters and a new election system allowing voters to pick more than one candidate, Yang has plenty of opportunity to broaden his coalition of support.

“We definitely have not heard too much about NYCHA,” Gropper said, referring to the New York City Housing Authority. “The federal monitor does have a say in what’s happening at NYCHA, but a strong mayor with a commitment to preserving housing stock and using tools available will go a long way toward working with these communities.”

In other circles, crime and the economy are the dominant topics of conversation, and people are just starting to pay attention to the mayor’s race.

“The only thing I hear coming out of everyone’s mouth is public safety and that’s linked to COVID recovery,” Paul Massey, CEO of B6 Real Estate Advisors and a former mayoral candidate, said. “If Yang couples his big-idea style with public safety, I think he’s a winner.”

Winning a political campaign is a lot easier than governing the city, not that Yang is looking ahead. Some housing leaders wonder if he truly knows what he’s in for.

“The question is, once he gets in, will he be able to withstand the onslaught from labor, progressives, and others pushing against him?” Jay Martin, executive director of the Community Housing Improvement Program, which represents property owners across the city, said. “When you’re not bought or sold, you have no alliances, so who knows what you’re going to do?”