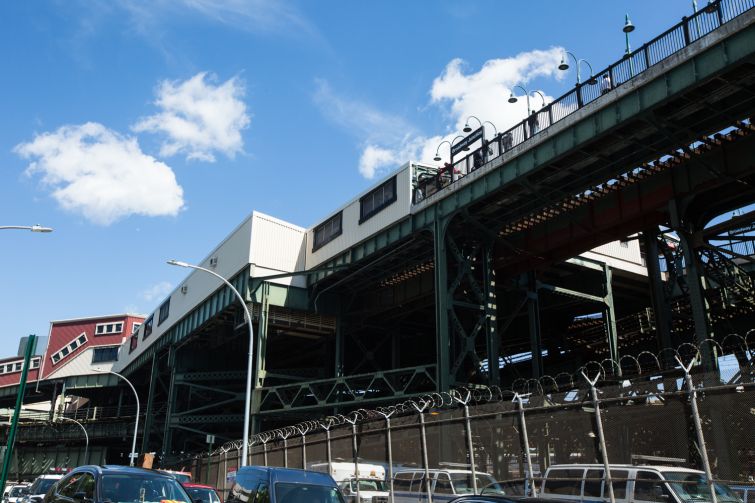 Broadway Junction is at a critical juncture.

The diamond-shaped area in Brooklyn at the intersection of five different neighborhoods, four different subway lines and a Long Island Rail Road station, will undergo dramatic changes once City Hall moves a city agency to the locale.

The area is adjacent to a rezoning of East New York and Ocean Hill that passed in 2016. Now, the city is investing $267 million in capital improvements for parts of Ocean Hill and East New York, and the city Economic Development Corporation is putting out a bid for a new Human Resources Administration office next month. (Sources at the EDC said they don’t expect the city to make a decision for another nine to 12 months after that.)

Developer Jonas Rudofsky put in a bid for the city site and hopes to lure the HRA to a 15-story project he wants to build on Atlantic Avenue. Rudofsky is also preparing to open a medical complex at 101 Pennsylvania Avenue, makign it one of the few medical buildings in the area. It will be a glassy seven-story high rise on the site of the former East New York Savings Bank with 121,000 square feet and 153 parking spaces.

“I think there’s significant demand, and transportation access is excellent,” Rudofsky said. “The community is much maligned, even though there’s nice housing stock in the city that would complement high rise buildings.”

It may take another decade, and maybe even longer than that, but change is coming to Broadway Junction, which touches Bushwick, Ocean Hill, Brownsville, Cypress Hills and East New York.

A number of developers are bullish about Broadway Junction, but few want to take the first step.

“If I won the lottery tomorrow, I would use all the money to buy land in that neighborhood,” said Timothy King, the managing partner of CPEX Real Estate. “There’s very little around it. That’s almost a benefit because it gives the city and developers a blank palette to paint on and an impetus to jump-start the neighborhood.”

The major commercial corridors in the area—Atlantic Avenue, Broadway, Fulton Street, Eastern Parkway and Jamaica Avenue—have few retail shops and banks. There are only a handful of grocery stores, although a C-Town is coming to Eastern Parkway and Saratoga Avenue in Ocean Hill, next summer.

There are barely any restaurants around the Broadway Junction subway station (home to the A, C, J and L lines) except Paphos Diner on Fulton Street, several takeout Chinese spots on Rockaway Avenue and a smattering of Popeye’s and McDonald’s fast-food franchises.

Those looking for department stores have to take the train to Woodhaven or Downtown Brooklyn or a bus to Spring Creek, a southeastern part of East New York that sits on Jamaica Bay.

The area directly south of Broadway Junction in East New York is a thriving industrial zone—one of the last large swaths of land in the city zoned for manufacturing that is home to 250 businesses and 3,000 jobs. (It’s also the biggest of the neighborhoods affected by the rezoning.)

“It reminds me of Long Island City [in Queens] 15 years ago,” King said. “It was essentially a backwater industrial area. Once you reach a critical mass of office and residential development it transforms into a full-time family-friendly neighborhood.”

Mayor Bill de Blasio, who campaigned on a platform of reducing inequality, has zeroed in on East New York and Ocean Hill as part of his citywide plan to build new affordable housing.

The City Council passed the rezoning in April 2016 over the objections of East New York community leaders who wanted greater levels of affordability in residential projects.

Despite all this promise, there has been little activity in Broadway Junction since the rezoning passed.

“I’m very excited about the commercial prospects of East New York,” said Tucker Reed, a principal at Totem and the former head of the Downtown Brooklyn Partnership. “You have one of the best transit hubs in the city, you have smart land use policy, you have buildings of an interesting character, and you have vacant land and underutilized buildings. That’s kind of a rare proposition so close to transit.”

Reed predicts many of the back office operations for government, finance, insurance and real estate, which have called Downtown Brooklyn and Lower Manhattan home, could look for lower-priced alternatives further east when those spaces exist.

“Broadway Junction to me is the logical place for the commercial market to anchor itself there,” Reed added. “Generally people in real estate like to be followers and want to see how markets are tested. Then capital and investment flows once one or two projects prove their feasibility.”

“The rezoning will spark development especially with the new jobs, good roads and transit,” said Jonathan Berman, an investment sales director at Ariel Property Advisors. “It won’t be a high-class neighborhood, but it could be a middle-class neighborhood.”

And it’s certainly not to say that nothing is happening in real estate.

Phipps Houses is constructing a 15-story affordable housing complex at 33-01 Atlantic Avenue in East New York, which will contain 403 units and 21,000 square feet of retail space on the ground floor.

Few could have imagined that process occurring through some parts of Brooklyn in the past three decades.

Bushwick was the site of some of the city’s worst arson following the 1977 blackout.

“I watched as the neighborhood literally burnt to the ground,” King said. “Today Bushwick is considered one of the most desirable neighborhoods in the borough. That will happen in East New York as well…It is inevitable over time that you would see the same changes occurring there as have throughout the rest of the borough.”

Not everybody is nearly as excited about the idea of major development coming to the area and the mayor’s plans.

More than one-third of families who live in the rezoned areas earn below 30 percent of the area median income, and activists believe a good percent of residents would not be able to afford to stay in East New York and Ocean Hill. City Comptroller Scott Stringer estimated that as many as 50,000 people would face a risk of displacement, in his December 2015 analysis of the rezoning plan.

East Brooklyn activist Tony Herbert predicts that many of his neighbors would leave New York entirely if housing prices rose.

“Where could they go? You can’t afford to live in the rest of the city,” Herbert said. “They’d have to find some type of new income, be put in a shelter or move out of the city.”

And there are the normal worries about, in TerraCRG’s Michael Hernandez’s words, the fact that it’s still a “pretty untested market.” He added, “It’s going to take time. These anchor tenants or even smaller tenants need to see something before they can make a push, and there’s nothing of size that gives them a vision to be there. There are a lot of vacant lots but nothing has been developed yet.”