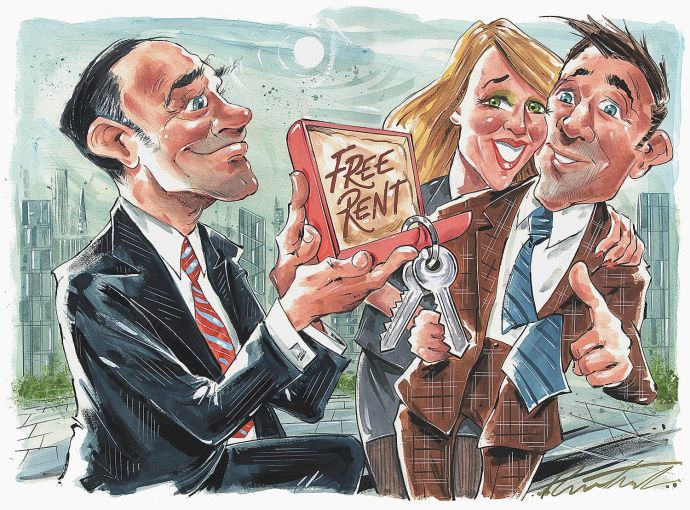 New York City office and retail landlords have been offering tenant sweeteners, such as free rent, to attract tenants during the coronavirus pandemic. Illustration: Russ Tudor

This week saw the second impeachment trial of Donald John Trump and it was jammed with all the unsurprising details of his presidency: dodgy lawyering, copious video footage, scowling politicians, unhinged cable newscasts.

There was less of a spotlight on another Trump-era trademark: the presidential pardon.

CO discovered that one of the beneficiaries of Trump’s largess, a convicted marijuana smuggler named Jonathan Braun, who was pardoned on Trump’s way out of the White House, was behind the $9.2 million judgment against Yoel Goldman’s spluttering All Year Management.

On Feb. 5, an entity known as Mapcap Funding LLC filed a confession of judgment against Goldman for $5 million, which had grown to $9.2 million with interest, default fees and attorney’s fees included, according to an affidavit.

Goldman is, in turn, suing Madcap, and in his suit named Braun as the person behind Madcap. (It should be noted that even though he got a presidential pardon, the FTC and the New York attorney general’s office is currently investigating Braun for predatory lending practices.)

This is hardly Yoel Goldman’s only problem: Just last week, CO took a deep dive into the myriad worries that make up his multibillion-dollar real estate business. But we expect that this latest flare-up will be one to keep an eye on.

What the hell are you looking at?

It was a combative week, not just in Washington and in the Brooklyn courts.

Stacey Cunningham, president of the New York Stock Exchange, penned an acid op-ed in The Wall Street Journal threatening to move operations to a more tax-friendly state if the Empire State’s legislators didn’t put a stop to adverse proposals like a stock transfer tax.

Is this a serious threat? Well, threats have been getting more and more believable lately. The German financial institution DekaBank, for instance, began moving to foreclose on the New York Marriott East Side last week after its owner, Lexington Avenue Hotel LP, failed to pay the $53 million mortgage last year.

And Amazon filed suit against New York Attorney General Letitia James in an effort to head off James’ challenges to its COVID safety protocols at Amazon warehouses.

What could be a sweeter valentine than that?

Yep, for a lot of landlords, the charade is over. If you’re a creditworthy tenant who will sign on a long lease? Take a year of free rent. Just sign on the dotted line, like, as soon as possible.

“What we’ve been seeing more recently,” CBRE’s Paul Amrich said, “is that …  concession packages were getting to levels where [landlords] didn’t want to have more out-of-pocket, and they didn’t want to wait any longer to get cash flow.”

And, while a lot of brokers might not be eager to advertise that kind of concession, there have been tangible cases to point to: Last month, the law firm Ballon Stoll Bader & Nadler took an 11-year, 6,000-square-foot lease at SL Green Realty’s 810 Seventh Avenue, where they secured a full year of free rent.

We admit this was probably not all that calming to landlords. Chillax, landlords. Here, take a hit off this: marijuana legalization is fast approaching the retail sector nationwide and will mean all sorts of good and bad things.

Don’t call it a comeback, coworking’s been here for years!

One area that sort of split the difference between a soothing versus combative week was coworking.

Coworking had a very bad year last year … and, yet, according to reports from operators like Industrious and WeWork, they’re making a sincere attempt to pivot away from their pre-2020 cash-burning model. And we learned that The Yard is taking over the Courtyard by Marriott in Herald Square to turn it into flex office space.

And! IWG threw a financial lifeline to the female-operated coworking operation The Wing this week after it had suffered a spate of problems even before the pandemic.

Another reason to be happy?

At last, we will have achieved normalcy.

No more soothing words than that.