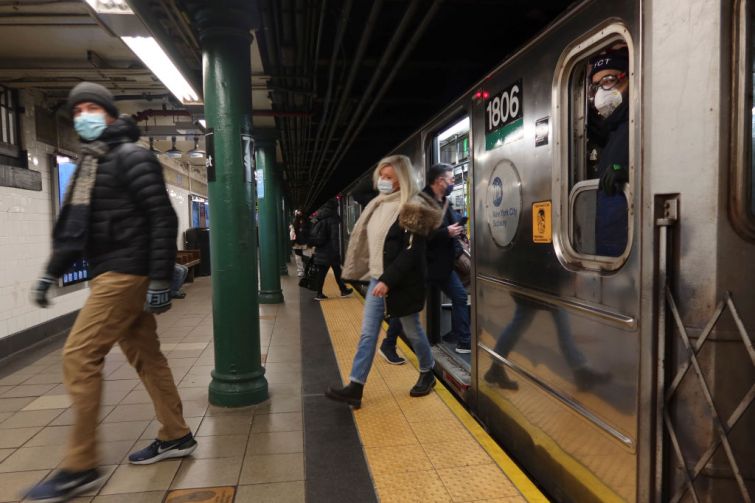 New York City is en route to socioeconomic recovery, with the steps necessary for reviving the commercial real estate industry — and the city at large — already well underway.

While New York grapples with the fallout from the omicron surge and related public health concerns, it has also faced a public safety problem, as well as an extended period of uncertainty over the return to office. These setbacks, as well as their solutions, were among the topics discussed during Commercial Observer’s second annual “The Future of New York: A Celebration of Public Service Showcasing New York’s Leadership,” held virtually during the second week of February.

The event, held on Wednesday, Feb. 9, hosted in tandem with the Real Estate Board of New York (REBNY), opened with three rounds of “red carpet” interviews under the heading, “Task Force New York: A Briefing on Top Priorities for Economic Recovery.” Moderated by CO’s Max Gross and Cathy Cunningham, the panel featured the heads of a trio of nonprofits dedicated to boosting business in different parts of New York: Fred Cerullo, president and CEO of the Grand Central Partnership; Jessica Lappin, president of the Alliance for Downtown New York; and Regina Myer, president of the Downtown Brooklyn Partnership.

The panelists agreed that restoring confidence in the city’s streets is key to forging forward.

“We have to bring the reality of safety to the transit system,” Cerullo said, noting that the subway is crucial not only for pandemic recovery, but for everyday survival in the city. Mayor Eric Adams has started to lay the foundation for new safety protocols, but making public transit safer and easier to use will require everything from the small scale — like mechanisms for clearing snow away from unreachable bus stops — to the large scale, like increased access to mental health resources that can move people in need away from the streets.

Transit also affects whether and how employees plan to return to offices and engage with their environments. Even as a work in progress, an increasingly safe transit system could get the city’s offices back up and running, said Andrew Kimball, CEO of major Brooklyn commercial hub Industry City. In order for employees to return to work, they must feel safe commuting.

In the second round of interviews, Kimball spoke alongside David Falk, president of the New York tri-state region at brokerage Newmark, and Nadir Settles, a managing director at asset manager and developer Nuveen.

Following the red carpet round of interviews, Douglas Durst of The Durst Organization reflected on 2021 in a series of opening remarks, expressing confidence in the collective vision of New York Gov. Kathy Hochul and Adams to move the city forward — an optimism echoed by SL Green Realty Corp. CEO Marc Holliday.

Holliday predicted that it could take three to six months for the Adams administration, installed in January, to transition and evaluate the best way forward. Long-term efforts, such as identifying and allocating funds for mental health resources, will require time, but Holliday hopes that collaboration will not only define the bureaucracy but also translate to a partnership between the city and its businesses.

Smart, pro-business policies will drive activity in New York, Fisher said, noting that the often negative tone around businesses and growth must shift in favor of the city’s best interests. Without improved transit, however, businesses can only do so much for New York.

“You can’t talk about an economic recovery [and] economic development without public safety,” Fisher said.

Given all the safety concerns, incentivizing workers to come to the office will require changes beyond a landlord’s jurisdiction, as employees must feel comfortable in the environment leading into their buildings. As such, the efforts to revive the city are all-encompassing and require all hands on deck, panelists said.

Yet even if an office’s neighborhood is safe, it’s no longer enough for an office to consist of cubicles or meeting rooms; rather, it’s now a matter of creating specific amenities that cannot be accessed from one’s home and therefore make the office invaluable — and enticing — to employees.

“Over the past two years, we’ve all made our homes into our offices,” Shvo said. “It’s time now that we make our offices start feeling like our home.”

Drawing employees into offices demands a restructuring of space utilization, JLL’s Hersch added, as Covid-19 has changed the way employees view their commutes. There must be a specific reason for workers to come into an office, or else employees will see it as a waste of their time to travel to and from it.

Potential motivations for an in-person work model include increased efficiency and productivity, which have been discussed throughout the pandemic, and will continue to be at the forefront of the conversation well into 2022.

Beyond concerns over office space, affordable housing remains a prevalent issue in the city and can be addressed via further collaboration — again, and especially, between the public and the private sectors.

The next panel — “Planning for More Equitable Communities: A Look at NYC’s 2022 Housing Forecast” — overviewed the need for creative solutions to finance affordable housing. Basha Gerhards, senior vice president of planning at REBNY, moderated the conversation with Meredith Marshall, co-founder and managing partner at developer BRP Companies, and Vince Toye, managing director and head of agency and off-balance sheet lending for JPMorgan Chase.

Toye emphasized the importance of thinking outside the box and evaluating how to reuse and rezone preexisting spaces, while cutting out the red tape — including zoning and permit regulations that must be checked off in order to carry out a project. Jumping through logistical hoops can take years, stalling a process that requires immediate attention. Because time is of the essence, the best way to think quickly is creatively and collaboratively.

This includes within the realm of environmental sustainability. It’s a topic more on the minds of owners, tenants, investors and the general public due to the effects of climate change and the renewed emphasis on health due to the pandemic.

“These public-private partnerships are how we turn ambitious emissions reduction goals into actual plans in reality, by leveraging the expertise of the private sector to deliver state-of-the-art renewable energy infrastructure on time and on budget,” said Luke Falk, vice president of clean power developer energyRe, who is working to funnel energy from upstate New York to the city.

Like earlier panelists, Tighe and Gilmartin expressed excitement over Adam’s and Hochul’s willingness to work with business, as well as real estate’s integrated role in the city’s fabric. Commercial real estate is the city’s largest tax base contributor, Gilmartin pointed out, as well as an essential contributor to the built environment.

“What was it Eric Adams said?” Gilmartin said. “That ‘oil is to Texas what real estate is to New York.’”

Contributing to real estate’s power in New York City is the talent, which Tighe and Gilmartin, as well as Scott Rechler, CEO and chairman of RXR, cited as the city’s magnetizing force. Rechler spoke to Cunningham in the Feb. 9 forum’s next event: “2022 Temperature Check: Where We Were, Where We Are & Where We Need to Be.” He noted that talent has returned to New York City, deeming it “the No. 1 ingredient for its success.”