The industry has a long wish list of things it wants the new mayor to tackle, including quality-of-life issues, faster permitting and zoning changes 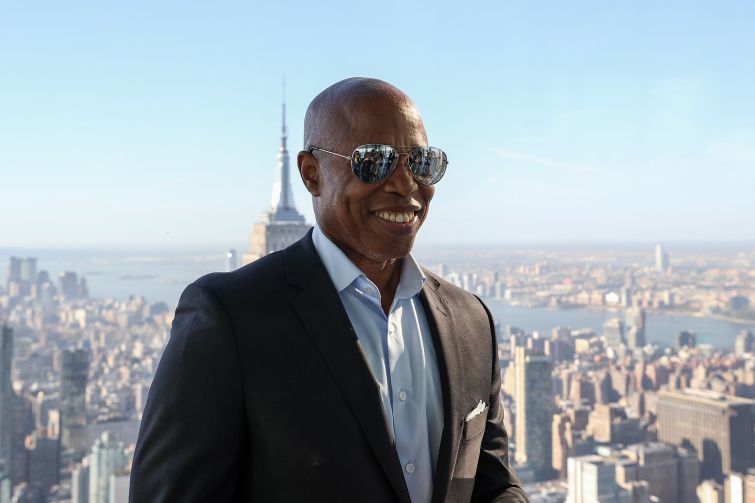 “Brooklyn is in the house,” MaryAnne Gilmartin, head of MAG Partners, said of the newly elected mayor, who like her hails from Brooklyn.

“Eric, was, from day one, a believer, a champion, and very accessible for our company, for the people in the company,” Gilmartin said.

In 2016, Gilmartin was three years into her tenure as CEO of Forest City when she invited Adams — the beep until being sworn in as mayor on Jan. 1 — to the firm’s offices in Downtown Brooklyn as part of a speaker series. He spoke about his Type 2 diabetes diagnosis and how he transformed his life, long before doing so publicly. He was “inspirational,” Gilmartin said, adding, “the boldness and the guts with which he speaks is very, very attractive from my point of view, just because if you want to do anything great, you have to be bold and be brave.” And that includes sharing “the audacity of his thinking.”

Boldness, guts and audacity were seen, Gilmartin said, in the willingness of the police officer-turned-beep-turned-mayor to speak out for community policing while campaigning in 2021 amid cries for defunding the police. And that was evident in his campaign accepting real estate funding when others opposed it. “He was warm to the real estate industry,” Gilmartin said.

Adams had long ingratiated himself with real estate executives, particularly in Brooklyn, and his campaign received a substantial amount of money from the industry ahead of the general election.

“Mayor Adams has a long history of working collaboratively with the real estate community to make the city fairer and safer, and, as he has said many times, he is willing to sit down with anyone who shares that vision,”  a spokesman for Adams emailed. “As we work to recover from COVID-19, Mayor Adams will be focused on building a more affordable city and a government that runs more efficiently. It’s time to ‘get stuff done’ for New Yorkers.” “Get Stuff Done” is Adams’ theme for his first 100 days in office.

In an unusual move, as Brooklyn beep and a mayoral candidate, Adams spoke at a special investor relations meeting for the city’s largest commercial landlord, SL Green Realty Corp., in December 2020.

“What oil is to Texas, real estate is to New York,” Adams said at the special meeting.

Adams acknowledged the importance of being able to work well with all constituencies, notably real estate.

“The next mayor must be comfortable enough to speak to business leaders such as Marc,” Adams said at the special meeting, referring to SL Green Chairman and CEO Marc Holliday. “They must be understanding law enforcement and public safety enough to speak to our police law enforcement officers, but they must also be able to roll up their sleeves and go into these communities that believe that the city has left them behind.”

A month after winning the Democratic primary, Adams attended SL Green’s grand opening of SUMMIT One Vanderbilt, the immersive observatory at the 1,401-foot One Vanderbilt.

“As New York mounts its comeback, it is important that we recognize and celebrate projects like this that remind us and the world about the resiliency and energy of our city,” Adams said in a statement after the October 2021 event.

“We are excited to work with Mayor Adams and his administration to ‘get stuff done’ and support the economic recovery of New York City,” Holliday said via a spokesman. “Like so many, we are looking forward to a renewed focus on promoting safety and quality of life, supporting our small and local business communities, and increasing investment in critical infrastructure.”

That desire to get stuff done is part of what developer Winston Fisher, a partner at Fisher Brothers, appreciates about the new mayor.

“It’s nice to have someone not who’s going to roll over, but somebody who understands that the economy has challenges, and is working to grow it and to foster jobs in the city,” Fisher said. “That requires a willingness. And I don’t think we had that in our last administration.”

Gov. Kathy Hochul has proposed replacing the 421a tax incentive, aka Affordable New York Housing, and a number of real estate executives talked about how Adams’ friendly relationship with the governor could be advantageous to New York City in terms of shaping those incentives.

“Between the mayor and the governor I’m much more confident about New York than I was before,” said Fisher, referring to the fraught relationship between former Mayor Bill de Blasio and disgraced Gov. Andrew Cuomo.

Tighe’s confidence in the Adams administration was bolstered by the news that the mayor would be appointing former City Council member Daniel Garodnick as chairman of the City Planning Commission, and possibly Carlo Scissura, the president and CEO of the New York Building Congress, as the head of the Economic Development Corporation. (Garodnick was appointed on Jan. 19.)

“From my point of view, these are two really strong people that signal a desire to build,” Tighe said. “[The mayor] keeps talking about getting it done. I mean, both of them are equipped perfectly for that. So, to me, that’s a fabulous signal.”

Regarding Scissura’s potential appointment, Tighe said his job with the Building Congress as well as his tenure as president and CEO of the Brooklyn Chamber of Commerce give her confidence should he receive a mayoral appointment. “He understands that business needs support from the city, both in terms of the lifting of certain regulations, but also the streamlining of processes,” Tighe said. “I envision him doing that.”

In terms of Tighe’s faith in Garodnick, that stems from him leading the effort to rezone Midtown East, a proposal that got over the goal line in 2017. Tighe noted that she would like to see rezonings that would allow for residences in business districts, with the idea of creating “more mixed-use environments.” She added, “Recognizing a true mixed-use neighborhood is more reflective of what we are now.”

Real estate attorney Jay Neveloff, a partner at Kramer Levin, shared a similar sentiment about the future of housing, saying that he would like to see Adams reimagine what affordable housing could be and create “different ways of having mixed-use zoning.”

“We not only have to provide safe affordable housing, but better housing,” Neveloff said, “housing that provides space, where the residents are happy about living, housing with amenities and staffing, not just painting and patching existing potentially substandard housing.​”

Gilmartin and Fisher described the dearth of housing as “a crisis” in the city. Per Fisher, “We need people to be able to afford to live here at all levels.” Gilmartin echoed his remark, underscoring the importance of creating housing for varying income levels close to the urban core.

A number of real estate execs touted the importance of having housing for residents of all income levels in all neighborhoods.

“I think there’s a real opportunity to continue to build housing in all neighborhoods of New York City,” said James Patchett, the CEO of A&E Real Estate. “I think it’s necessary from the supply standpoint; we need more housing. We need more affordable housing — we need more of all kinds of housing.”

Adams has already expressed interest in changing the fabric of housing in the city.

“Frankly, we have our rezoning strategy backward for years,” he said at the December 2020 SL Green investor meeting. “Upzonings in lower-income areas have moved wealthier people into working-class neighborhoods instead of moving working-class folks into neighborhoods with a high quality of life. And we have missed out on opportunities for density everywhere.”

Real estate-related mayoral appointments that Patchett thinks are worth celebrating in addition to Garodnick are Lorraine Grillo, the first deputy mayor, and Maria Torres-Springer, deputy mayor for economic and workforce development. Grillo served as the city’s COVID-19 recovery czar under de Blasio after more than a decade as CEO of the New York City School Construction Authority. Torres-Springer, who served over a decade in city government, including as commissioner of Small Business Services, most recently was the vice president for U.S. programs at the Ford Foundation.

Another critical issue, according to Tighe, is how the mayor will ameliorate unemployment in the city, which at 9.4 percent as of December was more than double the national average, per The New York Times.

As a member of the mayor’s corporate advisory committee, formed during Adams’ transition, Tighe has had the opportunity to interact with Adams.

“I asked him directly, I said, ‘Listen, you know we’re in a mode now where we really want to try and attract more jobs to New York,’” Tighe said of the December 2021 Zoom discussion. “‘And I would like to know if you personally are prepared to get on the phone with the CEOs of companies contemplating either moving some or all of their personnel to our city.’ And he jumped all over that question, as in ‘yes, I’m prepared.’”

The real estate execs with whom Commercial Observer spoke also ticked off infrastructure and public safety as issues for Adams to address.

Gilmartin talked about the impact Adams could have on infrastructure with the billions of federal infrastructure dollars earmarked for New York City.

“There is lots of money in Washington and he needs to be dogged about getting our fair share and spending it in a good way,” the developer said.

Patchett, the A&E CEO, also spoke of the desire for improved public safety and reliable transportation. In addition, he noted that developers like him would like to see more efficiencies in the processes of agencies like the Fire Department of New York and the city’s Department of Buildings.

As the president and CEO of the city’s Economic Development Corporation before landing at A&E last April, Patchett worked closely with Adams on a regular basis, when was the Brooklyn beep.

“When I was with EDC he was always talking about the fact that he believed in the importance of economic growth in neighborhoods, and continuing to support the financial success of those neighborhoods,” Patchett said.

Though he’s early in his term, the Real Estate Board of New York is happy with the efforts by the mayor, as he focuses on the city’s economic recovery from the coronavirus pandemic.

“All in all, we’ve been really pleased with the start of the Eric Adams mayoralty,” said Reggie Thomas, senior vice president of government affairs at REBNY. “He seems laser-focused right now on the core delivery of government services. It’s not exactly the sexiest of things, but it is undoubtedly something that the industry as a whole has been craving, and is really happy to see being delivered.”