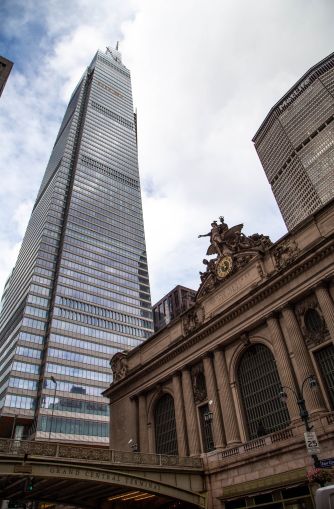 It’s official. The $3 billion refinance for One Vanderbilt —the sky-scraping, trophy office tower that’s been the talk of the town the past few years — has closed.

The 1.7 million-square-foot, 67-story skyscraper is owned by a joint venture between SL Green Realty Corp., National Pension Service of Korea and Hines Interests.

The financing represents the largest-ever, fixed-rate, CMBS financing secured by a single asset and — as has been proven by several other large financings to close in recent months — the CMBS market offered the most competitive execution for the deal.

“I don’t think we would have been able to achieve this proceeds level in either a club deal with multiple banks together or a bank syndicated deal,” Robert Schiffer, a managing director at SL Green, told Commercial Observer on Monday. “So, I think CMBS was really the only avenue to achieve this proceeds level, and, second, because we were confident that we’d achieve pricing that would best any other execution.”

The refinance has a coupon of 2.86 percent — or 2.94 percent inclusive of hedging costs — and retires $1.75 billion in construction debt on the property.

The financing was — unsurprisingly —  very heavily competed. While the eventual lending syndicate reads like a “who’s who” of nine top CMBS lenders, the sponsors could easily have added an additional 10 to the group, based on the level of interest in the transaction, Schiffer said.

“I think this [deal] was on everyone’s radar,” he said. “And, more importantly, what blew us away was the depth and quality of the bond-buying book. We were two times oversubscribed — across the entire facility — and to a group of bond buying institutions that are best in class.”

“Wells Fargo is thrilled that SL Green entrusted our institution to act as lead lender for the construction financing of this significant property, and to continue on as lead lender for the largest-ever, fixed-rate, CMBS financing secured by a single asset,” said Robert Rosenberg, a managing director at Wells Fargo, commented. “One Vanderbilt is truly a trophy office property, and it’s no surprise the CMBS financing was well oversubscribed.”

Putting a $3 billion financing on a Manhattan trophy office tower together during a global pandemic isn’t for the faint-hearted, but the refinance was sealed at a time when there’s a whirlwind of excitement about the future of New York City and confidence in its office sector.

“Things really changed over the last six months,” Schiffer said. “When we first started our discussions back in January, there was a little bit of trepidation in terms of executing a transaction of this size and this scale — given where we were then, in terms of return to office and some of the headwinds facing New York City.

“But, that really changed dramatically as we commenced the process in earnest in April, and then as we started pre-market conversations with potential bond buyers in May, the tone was very dramatically different,” Schiffer added. “People were seeing the return of New York and were excited about the opportunity to invest in the best new construction and best quality rent roll in the market. I think that was borne out in the bond-buying book and the execution we were able to achieve.”

Cementing that confidence, 13 leases have been executed at the asset since the pandemic began, taking One Vanderbilt’s occupancy from just below 75 percent to almost 90 percent. In June, SL Green announced it had signed 124,000 square feet of new leases at the office tower.

Those leases are a testament to the uniqueness of the asset, Schiffer said, as well as the confidence in New York City itself, with the recent buzz of energy around the city’s reopening being almost palpable.

“Again, you see that excitement in the bond-buying book here being two times oversubscribed. It’s testament not just to the asset — and the asset is a critical component of it, of course, but also to the optimism surrounding the return of New York offices,” he said.

Time waits for no man, and SL Green is keeping things moving swiftly along, moving its focus to the opening of the building’s observatory, SUMMIT One Vanderbilt, now that the refinance is closed.

“We got the permanent loan execution done, and now we’re going to be focused on the SUMMIT … starting today,” Schiffer said. “We open our doors on Oct. 21 of this year, in the fall. We think it’s going to be a game-changing art and immersive entertainment venue, which will have a real impact on the cultural and entertainment scene here in New York City.”

Chatham Financial acted as an advisor to SL Green on the transaction.