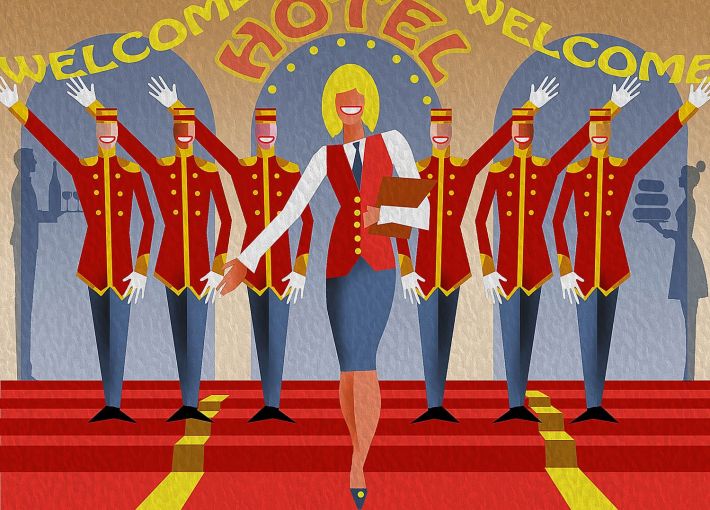 Be our guest! Illustration: Val Bochkov/ for Commercial Observer

One of the unquestioned hard-luck stories of the pandemic has been hospitality.

It’s been bad, bad, bad. The Hilton in Times Square shuttered its doors. Ian Schrager’s Edition a couple of blocks north went into foreclosure. There were UCC foreclosures on Hampton Inns and Holiday Inns up and down Manhattan.

But has the hospitality industry finally put the worst behind it?

Maybe, at least as far as the credit markets are concerned. We’re beginning to see activity after their year-plus slumber. Originations jumped 411 percent from the third quarter to the fourth quarter.

Naturally, many in the business are still worried about doing anything to upset this fragile recovery. (If it even is a recovery.) It will no doubt take a long time for the hotel business to get back on its feet. And dealing with one of Mayor de Blasio’s pre-pandemic proposals, a citywide special permit for hotel construction, is something that his successor will have to grapple with. (So far, almost all of the Democratic candidates are backing the measure, despite a lack of enthusiasm for it by nearly everybody except the Hotel Trades Council.)

Outside of New York, hospitality also seems to be showing signs of a tentative comeback.

“We spent a lot of time doing some really smart things,” Miami developer Brett Mufson, whose company owns the Fontainebleau, told Commercial Observer this month. “We buckled down and made sure we were cutting costs in the right way …. We’re lucky to be located mostly in South Florida, so our hotels remained open, starting in June. 2021 seems like it’s going to be an amazing year, relatively speaking. I don’t think we’re back to 2019 levels, but we should be surpassing 2019 by 2022.”

Indeed, Miami keeps getting a lot of the food/beverage/hospitality attention. New York’s beloved Tacombi taqueria is opening in Miami, and everyone from Pastis to Carbone to the Moxy Hotel is getting in on the action. (Lest anybody get too cocky, though, just remember retail rents on Miami’s Lincoln Road were hitting $350 per square foot pre-pandemic and are now around $150. Retail and hospitality still have a long way to go.)

There were a couple of straight-up odd stories this week.

Exhibit a. The Space Force is coming to L.A. (And, no, we don’t mean the Steve Carell Netflix spoof.) The newest branch of the armed services is establishing Space Systems Command at the L.A. Air Force Base and Missile Systems Center (LA-AFB) in El Segundo.

Exhibit b. Rick Caruso, the billionaire developer, says he’ll accept rent in bitcoin from his residential and retail tenants. (He’s apparently in a cryptocurrency partnership with the Winklevoss twins.)

Exhibit c. Real estate lawyer Mitchell Kossoff (who was last in the news for the dubious distinction of repping the East Village landlords who changed the locks and cleared out the apartment on a 65-year-old tenant who was hospitalized with COVID-19) is now, himself, missing. Kossoff is embroiled with lawsuits from SSM Realty Group and 537 Associates that allege he’s ghosted them and is withholding funds from their escrow accounts.

Speaking of lawsuits, it looks like Aby Rosen is involved in another one with Chinese developer Vanke. This one is for $700,000 claiming that Rosen and his partner Michael Fuchs missed a dozen capital calls at the project at 100 East 53rd Street. (This is not their first legal tango over the property; Rosen’s RFR took Vanke to court last October, accusing Vanke of orchestrating “an irreconcilable and grossly improper conflict of interest,” over assigning a $115 million controlling interest in 100 East 53rd’s construction debt to a Vanke affiliate.)

There must have been something in the air last week. Even those who haven’t gone so far as to take their complaints to court have been grumbling. Amol Sarva took a parting shot at his successors at Knotel in an email that CO got a look at:

“This process undermined lots of important relationships and hurt lots of customers and partners,” Sarva wrote. “I’m so disappointed that this was the direction pressed … they have literally hired a group of Adam Neuman[n]-era WeWork bros to lead the company forward.” (By way of disclosure: CO’s publisher and chairman, Joseph Meyer, is an investor in Knotel.)

It’s enough to distract one from the bigger pieces of news this week, but there were some whoppers.

And those in the real estate business who have felt a little relief about the state of New York’s hospitality market might not feel so good about its office market if you read JPMorgan Chase CEO Jamie Dimon’s annual message to shareholders released last week.

“Remote work will change how we manage our real estate,” Dimon said.

“As a result,” he added, “for every 100 employees, we may need seats for only 60 on average. This will significantly reduce our need for real estate.”

Let’s have some uplift, shall we?

The special purpose acquisition company (SPAC) is still alive and well as a tool for taking real estate companies public, and we saw an interesting one toying with the idea of using it last week.