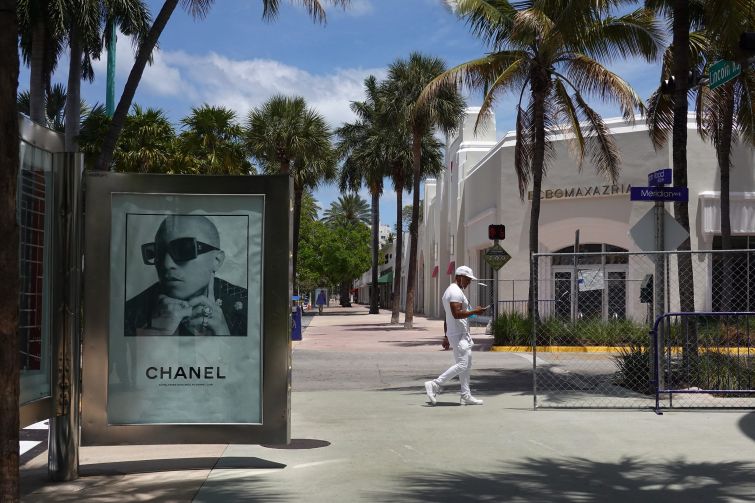 When LIK Fine Art moved into a new 2,800-square-foot space at 655 Lincoln Road in early March, just a few doors from its old space at 701 Lincoln Road, the tenant looked forward to a more expansive space with high ceilings and more visibility from the street, the better to show off its larger-than-life landscape photography.

Although the rents on the new space weren’t disclosed, chances are that LIK got a good deal, given the high vacancies on Lincoln Road today, according to local brokerage sources.

The pandemic has taken its toll on the high-flying street, where rents in the last three to five years, pre-pandemic, had been as high as $350 per square foot, the brokers said.

Rents on the street are now closer to $150 per square foot, or even $100 per square foot, although it is hard to pin down actual rents, said Larry Soroka, director of investment sales at Koniver Stern Group, a brokerage specializing in retail real estate with offices around the corner from Lincoln Road.

Recent research from CBRE backs that up. Asking rents in the first quarter of 2021 on Lincoln Road, a nearly 1.3 million-square-foot submarket, were an average of $109 per square foot, on a triple-net basis. The vacancy rate was 17.2 percent and the availability rate was 21.2 percent.

The street has a storied past. Built in the 1920s, within 10 years, it boasted such high-flying names as Saks Fifth Avenue and Bonwit Teller. But, by the late 1980s, Lincoln Road was often more populated by pigeons than people, and the storefronts were full of T-shirt shops.

Some landlords “gave away” their spaces for $100 per month to local artists, just to get bodies in them, said Soroka.

“I’ve been leasing on the street since rents were $6 per square foot, in the early 1990s,” he said. “That is when Lincoln Road was full of art galleries with local artists.”

By the mid-1990s, the street started to improve, and, by the early 2000s, the national chains trickled in. Names like Banana Republic and The News Café, known for its Monday night jazz sessions and models hanging out, set the tone.

The street was cool again, and retail rents began to soar.

Today, as Lincoln Road is still feeling the effects of the pandemic, it is hard to know what tenants are paying, Soroka said. Some landlords are settling for much lower rents to keep their spaces filled, while others are leaving their spaces empty rather than settle for lower rents.

Some landlords are staying with existing tenants and giving them better deals, Soroka said. They are making rents “livable,” he said.