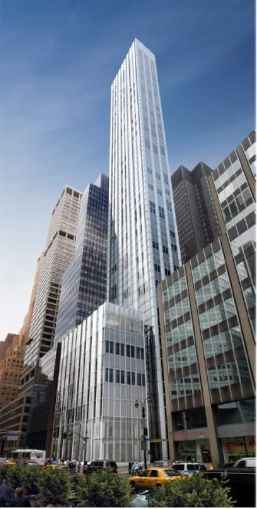 The legal dispute between partners RFR Holding and Vanke US over their luxury residential condominium development in Midtown just got a bit worse.

Vanke filed a lawsuit in New York County Supreme Court last week, claiming that RFR’s Aby Rosen and Michael Fuchs missed nearly a dozen capital calls for their project at 100 East 53rd Street since 2019, court records show. As a result, RFR owes Vanke nearly $700,000, including interest, in the building expenses that Vanke covered for RFR, according to the suit first reported by Crain’s New York Business.

Representatives for RFR and Vanke US, the U.S. subsidiary of Chinese developer Vanke, did not immediately respond to requests for comment.

The development partners have been duking it out in court since late October, when RFR accused Vanke of orchestrating “an irreconcilable and grossly improper conflict of interest,” when an affiliate of Vanke bought a $115 million controlling interest in 100 East 53rd’s construction debt.

Vanke shot back the next month with a countersuit to remove RFR as the partnership’s managing member entirely, claiming that the firm engaged “in a pattern of behavior designed to harm the company with a goal of obtaining a buy-out of its own interest at an exorbitant rate,” as CO previously reported.

RFR and Vanke first teamed in 2014 to buy the land at the site, also known as 610 Lexington Avenue, to build a luxury condo building designed by Foster + Partners. Under the deal, Vanke served as the development’s financial partner, while RFR handled the day-to-day construction and sales process.

Today, Vanke has a 95 percent stake in the partnership and RFR has a 7 percent stake, and the duo was able to secure a $360 million construction loan in 2015 from a group of lenders led by the Industrial and Commercial Bank of China (ICBC).

Construction wrapped in 2019, but the development struggled to attract buyers, which got worse after the coronavirus pandemic hit.

Starting in December 2019, RFR declined to make a $5.8 million capital call in the project to “replenish a deficiency in the interest and real estate tax reserves required by ICBC,” leaving Vanke to cover both its shares, according to the latest suit.

In an email from that month, Frank Mangieri, RFR’s chief legal officer, wrote to Vanke that the developer did not want to fund any capital calls until “we have agreed upon a long term strategy for dealing with the lender and financing of the project” and, instead, offered to put it in escrow in the meantime.

“We do not think that it makes sense, from a business perspective, to fund the requested reserve amount to lender without a long term plan for how to deal with the Lender and refinance the project; to do so would essentially be a waste of both Vanke’s and RFR’s funds,” Mangieri wrote, according to court documents.

Vanke’s earlier countersuit claimed that as the ICBC loan’s May 1, 2020, maturity date loomed, Rosen pursued a strategy “to create a bleak outlook for the property” so ICBC would offer a large discount on the loan. It also claimed RFR made a “low-ball offer” for a loan modification that ICBC rejected when Vanke stopped negotiating with the lender.

In August, RFR claimed that Vanke “pulled the rug out from under” them, when it found out that one of Vanke’s affiliates acquired a $115 million controlling interest in 100 East 53rd’s construction debt without notifying RFR.

RFR called that deal an “unauthorized transaction” that gave Vanke the power to assume control over loan enforcement actions, loan modifications, and even foreclose on the property. Vanke argued that it offered RFR the ability to participate in the debt investment and only did it to rescue the ownership company.