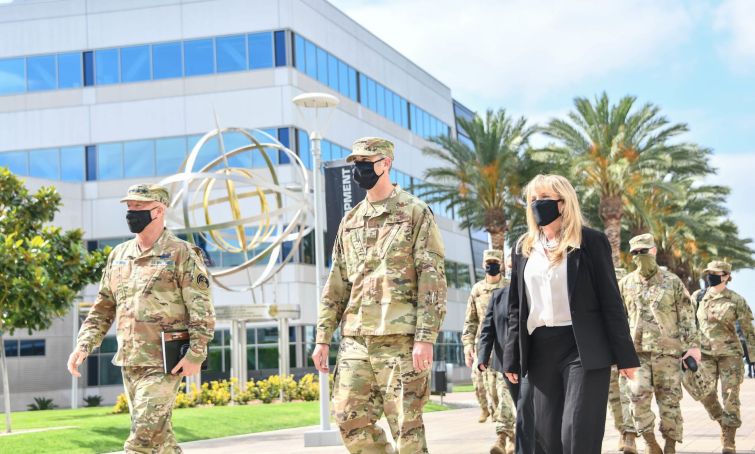 The U.S. Space Force is coming to Los Angeles.

America’s newest Armed Forces branch will establish Space Systems Command at the L.A. Air Force Base and Missile Systems Center (LA-AFB) in the coastal city of El Segundo. California Congressman Ted Lieu, who served on active duty at the base, and Congressman Ken Calvert announced the Pentagon’s decision.

LA-AFB at 483 North Aviation Boulevard will be the headquarters of Space Systems Command, one of three major commands under the Space Force. The property, owned by the federal government, will host all efforts to develop, acquire, launch, and sustain military space systems, as well as generate new missions for the base.

California Gov. Gavin Newsom praised the announcement, saying it will bring a “slew of new good-paying jobs” to L.A., while Rep. Calvert said, “Southern California is the space and aerospace intellectual capital of the world.”

El Segundo is one of the fastest growing markets in the region, and Rep. Lieu said the Space Force further solidifies its role as an aerospace hub. Since World War II, the small city has been home to aircraft and military defense manufacturers and contractors, as well as support services. It hosts research facilities and development centers for outlets that include The Aerospace Corporation, which builds satellites and aircraft; Northrop Grumman, which manufactures part of the F/A-18 fighter jet fuselage; and weapons manufacturer Raytheon.

El Segundo Mayor Drew Boyles said the Systems Command Center will advance the aerospace and defense industry in the city, and drive economic growth throughout the region.

“The decision to set up the Space Systems Command Center in El Segundo is a testament to the city’s proud tradition of innovation in aerospace and technology,” Boyles said in a statement via email.

Lieu said Southern California was “already leading the way on aerospace and space innovation,” and establishing the Space Systems Command at LA-AFB will position the region for further growth.

The industry base helped birth the current surge in demand for space in El Segundo, from top tech, media and entertainment firms. It’s now home to different tenant types, from the L.A. Lakers and Saatchi & Saatchi to Beyond Meat, the plant-based food company that signed the largest lease in L.A. so far in 2021 at Hackman Capital Partners’ redevelopment.

The Space Force was established in December 2019 to protect U.S. interests in space with a $9 billion annual budget.

“The challenge before the new Space Systems Command is great: We are in a race for superiority in space. We cannot rely on the antiquated acquisitions practices of the past, but we must move quickly and competently,” Calvert said.