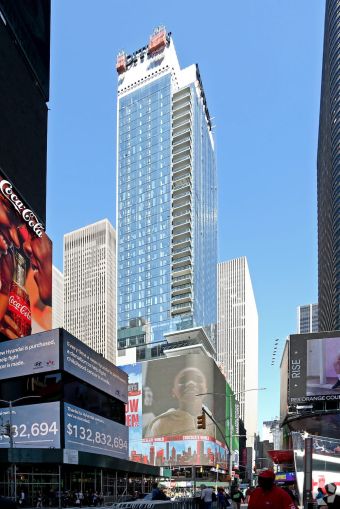 A judge granted the lenders on the Ian Schrager-designed Times Square Edition Hotel the right to foreclose on the property, court records show.

New York State Supreme Court Justice Joel Cohen gave a group of lenders, led by Natixis, the ability to foreclose on the 42-story property and scheduled a hearing on March 23 to figure out how to move forward with a sale, Bloomberg first reported.

A spokesperson for Natixis declined to comment. Representatives for the property owner, Maefield Development, did not immediately respond to a request for comment.

The 452-room Times Square Edition, at 701 Seventh Avenue, was designed by legendary hotelier Schrager with Marriott International, and quickly drew a high-end clientele after it opened in March 2019. It was once valued at more than $2 billion, according to Bloomberg.

However, Maefield’s celebrations were cut short after Natixis filed a lawsuit in December 2019 to foreclose on the property, when the owner defaulted on a $650 million loan provided by the Natixis-led group, court records show.

Maefield tried to restructure the deal but still defaulted on its loan another two times, according to court records. The coronavirus pandemic — which decimated the travel industry — didn’t help and operator Marriott closed the hotel in March 2020 as part of the state of New York’s lockdown measures.

Marriott said it would permanently close the spot in August because of Maefield’s defaults, but reversed that decision once Maefield seemed close to a deal to clear up its debt with Natixis, as Commercial Observer previously reported. That deal fell through and it’s unclear if the hotel will reopen after the foreclosure sale.

The Times Square Edition Hotel is far from the only hotel around New York City struggling to keep the lights on after the coronavirus pandemic. Several around the city have closed or filed for bankruptcy in recent months, with some shuttered ones rumored to be redeveloped into office properties.

That’s the fate of the closed Courtyard by Marriott in Herald Square, which flex office provider The Yard — part of another industry hampered by the pandemic — plans to turn into one of its locations.