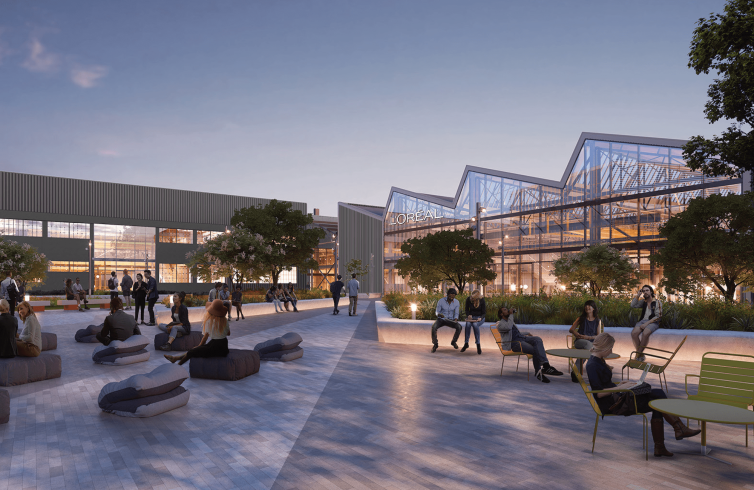 L’Oréal will move into 888 North Douglas in early 2022, calling it a “second headquarters.” photo: courtesy L’Oréal

This deal’s a real beaut.

Commercial Observer can first report that Hackman Capital Partners (HCP) snagged L’Oréal USA as the newest tenant for its prized office conversion in the expanding market of El Segundo, Calif.

The agreement with one of the world’s largest cosmetics companies extends an already storied streak of dominance by HCP over the past 12 months. That included the largest office lease of the first quarter in Los Angeles County: a 12-year, 280,000-square-foot deal with the hip plant-based food company Beyond Meat at the same creative campus.

L’Oréal plans to move into more than 100,000 square feet of indoor and outdoor workspaces at 888 North Douglas Avenue in early 2022, calling it a “second headquarters.” L’Oréal’s main headquarters opened in June 2016 on the west side of Manhattan in the newly developed Hudson Yards neighborhood.

L’Oréal’s new space was built to reflect its new hybrid-working model. Last August, the company announced a permanent “hybrid work approach” that allows some employees to work 40 percent of their time — or two days per week — remotely.

Just as HCP is one of the few real estate firms expanding faster than ever before after a pandemic, El Segundo is one of the most active submarkets making headlines in L.A., and the redevelopment of 888 North Douglas — converted from an aerospace manufacturing site run by Northrop Grumman into a hub of creative office space  — is emblematic of the greater evolution of El Segundo.

Since World War II, the small community has been home to the top aerospace and military defense manufacturers in the world. But a wave of conversions over the past decade transformed many industrial plants into modern office space, and helped birth a surge in demand from tech, media and entertainment companies.

Hackman has talked about how creative office space has been moving away from high-rise buildings and toward more sprawling campuses.

“I think that type of product will continue to be very successful,” Michael Hackman, founder and CEO of HCP, said. “There was a significant push toward that anyway, and I think COVID nudged it along.”

Even though HCP has commitments from Beyond Meat and L’Oréal under its belt — and in a time when office demand has been at best obscured — the Culver City-based firm has made much larger waves with its rampant studio and soundstage expansion.

In January, HCP and Square Mile Capital Management entered a new venture to take management control of the fully leased Raleigh Studios in the heart of Hollywood. And, about a week later, the firm announced that it acquired Sony Pictures Animation Campus in its hometown. When the ink was still drying on that deal, HCP announced a $1.25 billion redevelopment plan of the iconic Television City in L.A. that will bring more than 1.13 million square feet of studio, office, and support space.