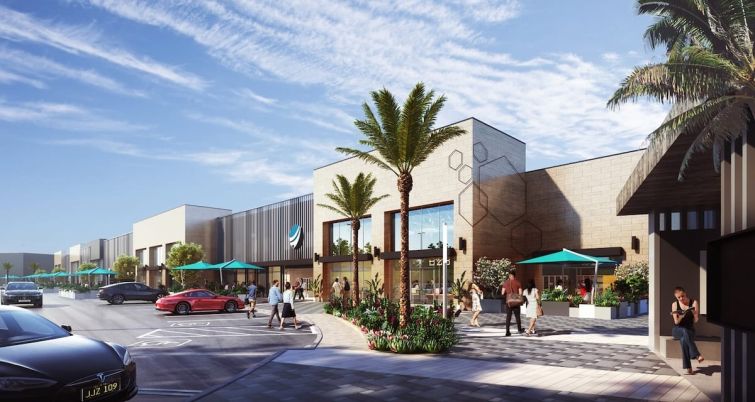 When complete, The Collection will include almost 50,000 square feet. photo: Federal Realty

Federal Realty Investment Trust has announced two new leases for its office conversion in the city of El Segundo, one of the fastest growing submarkets in Los Angeles County. The redevelopment could be a model that helps save some brick-and-mortar retail properties by adding or combining office space.

Federal Realty is converting the retail property called The Collection at 2008 East Park Place, within the larger Plaza El Segundo complex. Haus Laboratories, a cosmetics brand by pop star Lady Gaga, signed for 15,551 square feet; and Ideation Beauty, a multinational cosmetics supplier, signed for 11,000 square feet, which will house its U.S. headquarters. The two companies will occupy two of three buildings that make up The Collection, which is set to open this summer.

Federal Realty will start redeveloping the third building later this year. When complete, The Collection will include almost 50,000 square feet adjacent to Plaza El Segundo, which features about 20 retailers, including Anthropologie; Best Buy; and Whole Foods; as well as The Point, another retail center managed by Federal Realty.

The average asking rates for rent in El Segundo was $4.18 per square foot in the fourth quarter of 2020, according to Savills. That’s above the county average of $3.74 per square foot, but still significantly lower than the $5.80-$6 range in Century City and Santa Monica.

Jeff Kreshek, senior vice president of West Coast leasing at Federal Realty, explained that the firm has been working on the redevelopment for about three years after seeing the changes in the retail sector.

“We saw the trends changing, and we started to plan for a pivot,” he told Commercial Observer. “We have a lot of retail there, and we had an opportunity to take a little bit away. There’s a lot of it in the general market, and certainly an oversupply in the United States.”

Federal Realty learned that adding a major office component to a retail complex — allowing for workers to take care of daily needs, health and wellness, shopping, and more without getting in the car again — was successful after developing The Point, which has offices on the second floor.

“We found workers and companies were very much gravitating towards amenitized office space,” Kreshek said. “We also have projects throughout the country where we’ve been able to pull this combination off.”

For more than five years, El Segundo has seen a constant wave of major office redevelopments and the creation of a new submarket separate from Silicon Beach and the Westside. But most of the small city’s growth came from industrial property conversions. For example, plant-based food company Beyond Meat announced that it’s taking 280,000 square feet of space at Hackman Capital’s redevelopment at 888 North Douglas Street, which was previously a manufacturing facility for Northrop Grumman.

“A lot of the other campuses that are industrial buildings transforming into office in El Segundo are fantastic developments, and great for the community,” Kreshek said. “But, they’re not amenitized. So they’re looking at how to add some retail, a restaurant, coffee shop, to amenitize the office. We looked at it as, ‘How can we add office to amenitize our retail?’”