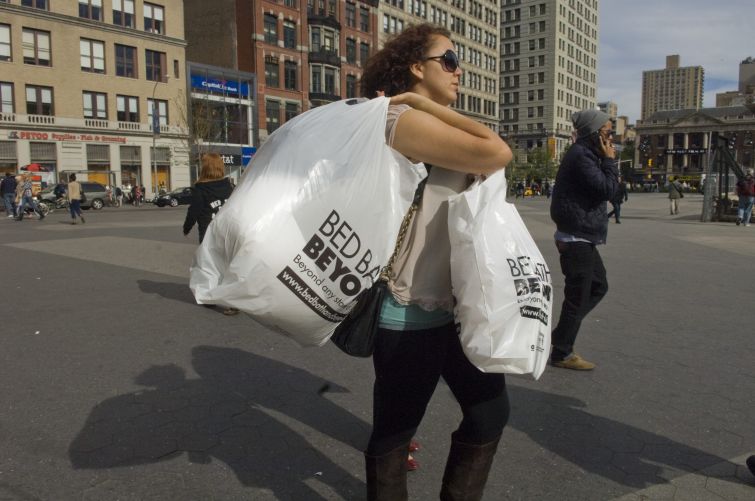 Bed Bath & Beyond is closing dozens of stores, including Manhattan. Richard Levine/Corbis via Getty Images)

Home Depot plans to lease more than 120,000 square feet at Gazit Horizons‘ 410 East 61st Street on the Upper East Side. The home improvement retailer will fill the space that Bed Bath & Beyond plans to vacate when its current lease expires in 2021. The home goods retailer is closing several dozen stores nationwide, including another one down on West 23rd Street in Chelsea.

The 20-year Home Depot deal at 410 East 61st is the largest retail lease in size and rent in Manhattan in the past several years, according to Gazit’s parent, Gazit-Globe. The retailer will exit a space at Vornado Realty Trust‘s 731 Lexington Avenue, and move into the East 61st Street space in the next few years, Gazit-Globe said. (It’s unclear what might fill that 731 Lex space, though Target is reportedly looking.)

Home Depot will begin building out the space in 2021, as soon as Bed Bath & Beyond leaves. Peter Ripka of Ripco Real Estate represented both landlord and tenant in the deal.

Gazit-Globe did not immediately provide information about the rent and other lease terms, though an executive at Gazit Horizons said in a statement that the lease involved “sizable rent increases.” The owners of 410 East 61st are hailing the lease as proof that brick-and-mortar in the city isn’t as terminal as originally diagnosed.

“The reports of retail’s death in New York City have been greatly exaggerated,” Jeff Mooallem, president and chief executive officer of Gazit Horizons, said. “The execution of this lease, at the peak of the COVID-19 pandemic, is an important sign of confidence in New York City and a major accomplishment for all parties involved.”

Of course, brick-and-mortar retail does face severe challenges, including ones that predate the pandemic. Many prominent retailers are sinking under pressure from demand for payouts from the private equity firms that control them and from the remorseless rise of e-commerce. The pandemic has only furthered that rise. For every little bright spot for brick-and-mortar retail, there seem to be a dozen new warehouse leases for last-mile delivery sites for the likes of Amazon.

Brick-and-mortar’s flailing has led to open talk in New York and elsewhere about repurposing store spaces big and small. The potential re-uses include office space and, yes, one of those last-mile delivery sites. Meanwhile, as the pandemic drags on and further lockdowns become a possibility, there will likely be more opportunities for such re-uses as retail bankruptcies pile up and loans come due.