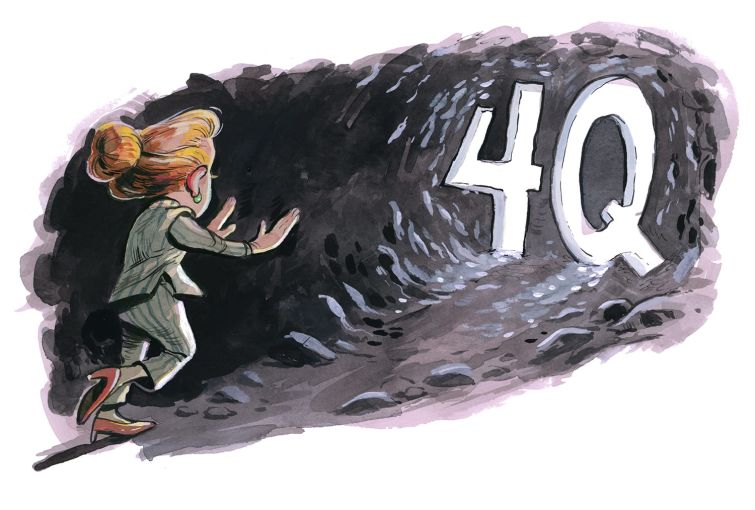 Head towards the light, lenders. Illustration by Britt Spencer.

Commercial real estate financing is more volatile now than at any time since the Great Recession due to the novel coronavirus pandemic. Still, there’s activity—and it involves lenders taking as much care as many of their potential customers.

“What you saw when the virus hit with full force was a number of borrowers sort of hunkering down, rather than looking at new transaction activity, and really looking at their existing portfolios and making sure they were in as good a shape as they could possibly be,” said Jamie Woodwell, vice president of commercial real estate research for the Mortgage Bankers Association.

“Similarly,” he added, “you had a number of lenders, given all the uncertainty in the market, they pulled back from lending.”

That pullback, of course, has ricocheted around the market for different types of commercial real estate. It’s also spawned a kind of parlor game for lenders and other observers: Which sectors are worth the risk and which might have to wait for a coronavirus vaccine?

It turns out that boring old industrial space—even self-storage—might have a considerable jump on the flashiest of hotels,  and that multifamily isn’t as unappealing for lenders as perhaps thought.

This year started with a lot of potential in terms of investment sales. A CBRE forecast predicted some $478 billion to $502 billion of investment nationwide, comparable to banner years in 2018 and 2019. Much of that promise was due to an aversion to risk among investors and hundreds of billions in private equity on the sidelines that needed to be spent by the end of 2020 to meet promised investment deadlines.

It hasn’t worked out that way. January and February saw a healthy amount of deals, enough to lift first-quarter investment volume 8.1 percent annually nationwide, to $116.5 billion, according to CBRE. But 77 percent of that activity was in those first two months. Enter COVID-19 in March, and activity dropped. The investment sales market has been in a holding pattern ever since.

The same is true for the financing behind it. The Mortgage Bankers Association (MBA) reported a 2 percent annual drop during the first quarter in originations nationwide for commercial mortgage loans. Total activity was also down 40 percent from the fourth quarter, though such a fourth-to-first quarterly drop is typical (second-quarter results aren’t yet available).

Originations for loans tied to financing hotels, industrial and retail were each down more than 30 percent year-over-year, while loan originations for office properties increased 8 percent and for multifamily 15 percent.

Much of the financing, too, is coming from banks and alternate lenders such as REITs and debt funds, according to CBRE. The two accounted for more than 62 percent of commercial real estate lending nationwide in the first quarter not backed by government entities such as Fannie Mae. Life companies were third, with about one-fifth of the share.

Meanwhile, the economic fallout from the pandemic has led to a major bounce in delinquencies for loans tied to commercial mortgage-backed securities. Borrowers are seeking special servicing—or just plain defaulting—at a pace unexpected at the start of 2020.

“The CMBS market was effectively closed when COVID came in,” Dustin Stolly, a vice chairman at Newmark Knight Frank and head of its financing operation, said.

Fitch Ratings in June noted its most substantial monthly increase in CMBS delinquencies in the nearly 16 years it’s been tracking such numbers—an increase of 213 basis points, to a 3.59 percent share of CMBS loans. The agency expects the rate to continue to increase through the next few months because it expects the overwhelming majority of loans now 30 days delinquent will roll to 60 days, with more transferring to special servicing.

In an echo of drop-offs in mortgage originations, the shares of delinquent CMBS-backed loans tied to retail and hotels were particularly high in June: 11.49 percent for those tied to hotel and 7.86 percent for retail-related ones.

Silver linings are out there, though, despite the gray clouds. Just as much of the U.S. populace has tested the waters on what works for them amid coronavirus, commercial real estate financing has done the same.

And the results point to a bifurcation in the market. What’s in: multifamily, with a catch, and industrial space, including self-storage facilities and warehouses for last-mile deliveries for e-retailers like Amazon. What’s out: brick-and-mortar retailers and especially hotels.

“Hotel is probably the most difficult asset class to get financed now and will likely be for the near future,” Warren de Haan, co-founder and a managing partner at lender ACORE Capital, said.

It’s not much better for retail. From the start of March through early April, as the pandemic shut down much of the U.S. economy, 173 CMBS loans arranged under post-Great Recession terms and totaling $10.1 billion were transferred into special servicing, Moody’s Investors Service reported. Most of these were tied to retail and hospitality, and retail in general is drowning in red ink and bankruptcies.

Some of the reasons predate the coronavirus—brick-and-mortar has long struggled against e-commerce—but the pandemic didn’t help. Hotels, in particular, found themselves on the inessential list of many states as they shuttered businesses to stem the virus’ spread.

That has only now begun to change, and it’s unclear whether hotels in some markets will be able to operate for long stretches of time. And, as for brick-and-mortar retail, that same e-commerce bugbear remains, coronavirus, or not. Lenders abhor risk. Hence the popularity of other sectors as 2020 moves along its second half.

Like with the revulsion toward retail, the allure of industrial lay in trends underway pre-pandemic. Such space in and around urban areas has become especially coveted to facilitate evermore deliveries of products ordered online. This has helped industrial outperform other sectors in terms of cap rates and revenue growth for years. Plus, it’s a small sector for investors to deal in compared with lodging, multifamily and office.

“There are a number of industrial portfolios in the market that are receiving good traction from the bond investor community,” Stolly said.

As for multifamily, it has Fannie Mae and Freddie Mac to buoy its financing climate. The presence of those behemoth quasi-government agencies in the sector lessens risk even amid tumultuous economic uncertainty, observers say.

Predictably, then, multifamily had a pretty good first quarter, with acquisitions nationwide totaling $38 billion, about the same as the first quarter of 2019, and financing was “robust,” according to a CBRE report. The same report, though, warned that the second quarter could bring more dismal numbers.

The office sector offers probably the best crystal ball for peering into the rest of 2020 financing-wise. It was never as down and out as brick-and-mortar retail pre-COVID, and it never took as much of a beating as lodging from the pandemic. But questions of how much space companies and industries will need as things normalize leaves offices as riskier financing propositions than industrial or multifamily.

He also got at the fundamental weapon lenders are arming themselves with for the rest of the year. “There’s a lot of capital sitting out there,” de Haan said. “Most of that capital is being very prudent and thoughtful about their underwriting.”

Indeed, that’s a big advantage the current lending climate has over the one surrounding the last recession in 2007-2008: stricter underwriting. Lenders are more selective and baking more stringent risk repellents into deals, including interest rate floors and debt service reserves (aka cash assets lenders can lay claim to). There’s still maneuverability for both sides though.

And any financing is getting done amid historically low interest rates that are expected to continue through at least 2021. Also, lenders and borrowers have those numbers from the early part of the pandemic to go by in determining what’s relatively risky and what’s not—a little dose of certainty that simply didn’t exist in March and April.

As more certainty returns, so will more financing deals. This is especially true in those sectors already claiming the lion’s share, but also in sectors such as office, as all parties figure out how to get back to some semblance of normalcy.

“We’re not seeing a lot of transaction volume right now,” de Haan said. “We need some stability in the markets before that happens, and there’s a tremendous amount of dry capital sitting on the sidelines looking to acquire properties and a tremendous amount of lending capacity. But it just feels like things need to settle down first.”