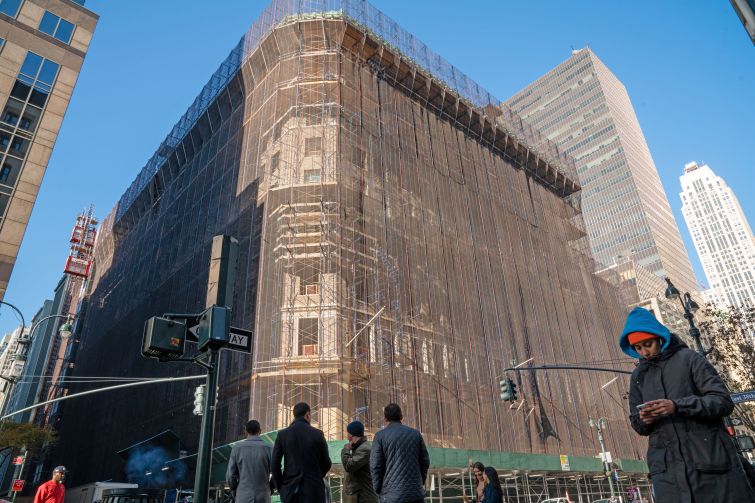 E-commerce behemoth Amazon will open a 2,000-person office at the former Lord & Taylor flagship on Fifth Avenue, the company announced this morning.

“People from all walks of life come to Amazon to develop their career – from recent graduates looking for a place to turn their ideas into high-impact products, to veterans accessing new jobs in cloud computing thanks to our upskilling programs,” Beth Galetti, the senior vice president of human resources at Amazon, said in a statement. “These 3,500 new jobs will be in cities across the country with strong and diverse talent pools.”

Amazon’s 630,000-square-foot outpost at Lord & Taylor’s former 424 Fifth Avenue flagship — which it bought from WeWork in March for $1.15 billion — will host teams working on the company’s advertising, music, video and fashion platform, the company said. It’s set to open in 2023, WSJ reported.

“We have turned New York City into a true tech hub, and Amazon’s increasing presence — buoyed by adding 2,000 jobs during a global pandemic — is proof positive that the Empire State is open for business and that this critical sector will continue to spur innovation and growth,” Gov. Andrew Cuomo said in a statement.

Amazon’s latest Manhattan office comes after the e-commerce giant was run out of Long Island City, Queens, by locals and elected officials in 2019, and bucks the trend of many companies downsizing their portfolio after seeing the success of remote work during the coronavirus pandemic.

Since the pandemic forced office employees to work from home to curb the spread of the disease, companies have seen and sometimes embraced a world without offices. Employees have increased productivity — plus they get back hours off their commutes every week — while employers can save about $11,000 a year per person by ditching the office, said Moe Vela, the chief transparency officer of remote work management software provider TransparentBusiness.

“We involuntarily went into a remote workforce model around the world, but millennials have for years now been demanding it,” Vela, who previously held posts in Bill Clinton and Barack Obama’s administrations, said. “Employers and companies were not as responsive as probably they should have been, but the remote workforce model has proven it works.”

Morgan Stanely CEO James Gorman previously told Bloomberg Television that the company has started to consider shrinking its office portfolio after seeing the success of remote work and he isn’t alone.

MasterCard, which has about 200,000 workers globally, told its employees to work from home until the virus is under control and is looking to consolidate its offices. A survey of more than 500 startup founders released by leadership consulting firm The Kung Group found that 66 percent of them are looking into downsizing or eliminating their offices.

Facebook and Google told its employees to plan to work remotely until 2021, while Twitter went one step further and allowed the majority of its staff to work from home forever.

Law firms around the country have grown more comfortable with remote work and a recent Cushman & Wakefield report found that 96 percent of the 120 firms it surveyed anticipate their staff will work from home more in the next five years.

“Each week that passes the comfort level increases,” Sherry Cushman, an executive managing director at C&W and head of its legal sector advisory group, previously told Commercial Observer. “We anticipate that we’re going to see quite a bit of lease restructures and givebacks of space.”

But even with banks, law firms and small startups thinking of giving back space, some tech giants went in the other direction.

And TikTok — which President Donald Trump has been fighting to ban in the United States — made waves when it signed a deal for 232,000 square feet at the Durst Organization’s One Five One.

“They are all innovating and collaborating, and that puts a large emphasis on the workplace,” said Michael Mathias, an executive managing director at brokerage Savills. “What the workplace looks like might change, but the need for an office I think still exists.”

Mathias expects companies to allow more work from home options in the future, but huge companies like Amazon and Facebook going all in on Manhattan office space will cause smaller tech startups to follow suit.

“In different industries, everybody follows the leader,” he said. “What they do and their plans on work from home and return to the office is absolutely impacting the way others respond.”

But Vela isn’t convinced others will follow Amazon’s lead.

“I’m actually shocked that Amazon is announcing this,” Vela said. “I think these guys are outliers and I think it’s going to backfire on them.”

Since the pandemic got most employees used to working remotely, Vela expects Amazon will have a hard time convincing people to come back to an office anytime soon.

“They’re going to have trouble recruiting 2,000 who are going to sit in a petri dish,” he said. “You can buy all the office space you want. I don’t know any employee who’s going to be rushing to go into a petri dish.”

Despite ditching its plans to build a 4 million-square-foot campus in Long Island City, the company signed a lease for 335,000 square feet at 410 Tenth Avenue in December, bringing its office presence in the city to a bit over 1 million square feet.

Critics of Amazon’s Long Island City headquarters, and the $2.5 billion in tax breaks the city and state offered the company, argued that Amazon couldn’t stay away from New York City.

“I was always of the opinion — which is why I had the position I did — that Amazon needed New York more than New York needed Amazon,” State Sen. Michael Gianaris, who fought against the Long Island City plans, previously told CO. “All of tech is already coming here because this is where the talent pool is that they need… Amazon could not afford to allow the competition to seize that talent without also getting their piece of it.”