Retail Has a Ticking Debt Bomb Set to Explode 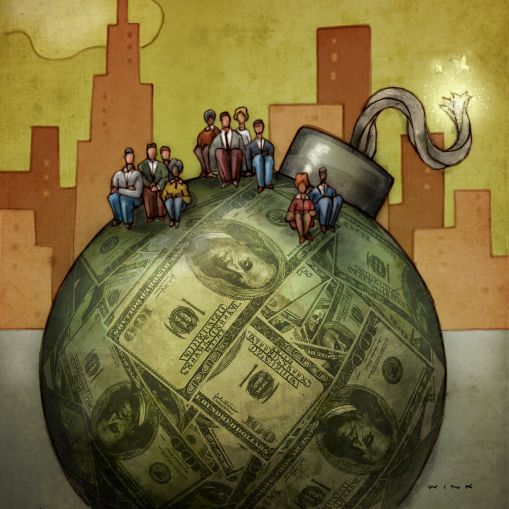 Perry Mandarino has been working in business restructuring and turnarounds since 1987, including in retail. He’s seen waves of changes in that industry, including the rise of big-box stores such as Home Depot and Best Buy and those same stores swallowing their smaller rivals.

But what’s happening now to retail due to the novel coronavirus pandemic is something else entirely.

“You have retail Darwinism, retail survival of the fittest as the bigger get bigger and the smaller disappear,” Mandarino, head of restructuring and co-head of investment banking at B Riley FBR, said in early May. “I haven’t looked at the stats, but I suspect this will be even bigger than the 2008-2009 timeframe. The early 2000s were pretty rough also, but this will probably be the worst as of now.”

And a lot of that has to do with debt. By pretty much any measure, as well as anecdotally, retail is collectively drowning in red ink. That has led to a lot of uncertainty that only the end of a virtual shutdown of much of the U.S. economy will dispel. Even then, though, retailers will be facing many of the same challenges that necessitated all that debt in the first place.

Déjà vu all over again

In early May, Neiman Marcus and J. Crew became the latest major names to seek bankruptcy protection. The former is carrying $4.8 billion in debt and the latter $1.7 billion, and each is planning a restructuring with existing and new creditors to stay afloat until a sizable chunk of the economy reopens.

Meanwhile, ratings agencies such as Moody’s are downgrading retailers’ creditworthiness. Fitch bumped Macy’s to junk in April and Gap to the same in May.

Also, debt maturities continue to come due in 2020, following a surge of such benchmarks in 2019, according to S&P Global Market Intelligence. As much as $960 million in debt is expected to mature in 2020 from distressed publicly traded U.S. companies dealing in consumer durables as well as apparel, household, and personal products, and in retailing in general. (The figure excludes capital lease obligations; and covers retailers rated less than BB- or those failing to meet other debt-servicing expectations.)

The $960 million in maturing debt in 2020 is likely now the tip of the iceberg, though, due to the pandemic’s effects. Some $2.71 billion is expected to come due in 2021 — Macy’s will carry the most then, with an anticipated $536 million — and a further $4.36 billion in 2022, with Ascena Retail Group, parent of brands such as Ann Taylor, Justice, and LOFT, carrying the most at nearly $1.3 billion.

Some of the growth in the debt load can be attributed to the arrival of private equity firms, which snapped up positions in many of these retailers and demanded dividends as well as piled up debt during the takeovers.

That ate into already thin margins, and drove some retailers that much closer to — and over — the financial edge. Ten out of the 14 largest retail chain bankruptcies nationwide from 2012 to early 2019 were at chains that private equity had acquired control of, according to the Center for Democracy, a Brooklyn-based advocacy group. Private equity backed two-thirds of the retailers that made Chapter 11 filings in 2016 and 2017, the group said.

New York City-based grocer Fairway Market is a good case in point. It filed for bankruptcy in January, marking its second trip through court in about four years. The grocer’s 2007 private equity-led buyout led to a poorly-planned expansion, a heavy debt load and an ill-advised initial public offering. The company listed its liabilities as between $100 to $500 million and said its cash declined to less than $1 million before the bankruptcy proceedings.

Another popular New York grocer, Dean & DeLuca, filed for bankruptcy in April, listed between $100 to $500 million in estimated liabilities and only $10 to $50 million of assets. The mini-chain had been purchased for $140 million by Thailand-based Pace Development Corporation in 2014 and faltered as it pursued an aggressive, debt-fueled expansion plan. And, for that matter, both Neiman Marcus and J. Crew had private equity backing.

Online shopping over the past several years has eaten into the bottom lines of retailers that rely on brick-and-mortar locations — exactly the kind that took on debt to survive and that are now facing insolvency amid the pandemic’s economic effects.

This one-two punch from the internet and private equity already had many retailers reeling. The last thing they needed was a pandemic that forced store closures and consumers to stop spending money.

“Ultimately, we don’t really think the coronavirus outbreak is what’s creating all of these bankruptcies,” Robb Paltz, an associate managing director at Moody’s, said. “These are pre-existing problems that are more being amplified by the virus.”

Paltz and others also say that the retailers most in trouble now with debt servicing are those in the discretionary realm. Non-discretionary retailers — think grocery stores, pharmacies, and wholesale clubs such as Costco — are doing fine through the pandemic. It’s retailers that rely on shoppers spending discretionary income on non-essential items, especially in-store, that are buckling.

Indeed, Moody’s said in late March that it expects department stores and apparel and footwear retailers to be the worst hit, with 2020 operating income dropping 40 percent. Off-price stores such as TJX Companies and Burlington Coat Factory and specialty retailers such as Michael’s and Bed Bath & Beyond will see smaller drops — though still as high as 15 and 10 percent, respectively.

Indebted retailers do have options. Some are availing themselves of asset-based loans (or ABLs), probably the least riskiest for lenders and borrowers alike in terms of drawing fresh financing. Retailers that have the assets to back these loans are in a good position to financially survive the pandemic, analysts say.

“If it’s ABL debt, the inventory values are still there, so the ABL debt should just continue normally,” Mandarino said.

“I would be very concerned as a debt holder in any retail matter today if I was anywhere else in the capital structure but the top, secured by assets,” Jim Loughlin, managing director in BDO USA’s business restructuring and turnaround services practice. “The place to play is at the top of the capital structure because I think all bets are off in terms of where cash flow capabilities of these businesses may be in the future and what that means relative to future equity valuations.”

As for the retailers themselves, ownership and location matter. Those not controlled by private equity and those with stores located in prime spots in busier shopping districts are better prepared to weather the storm. J Crew and Neiman Marcus are examples, according to Fitch senior director David Silverman.

“Fitch notes that while a disproportionate number of retail bankruptcies result in liquidation as compared with other sectors, both of these retailers could emerge as going concerns, given a combination of good brand equity, relatively strong real estate positions in better malls and shopping districts, and reasonable cash flow characteristics prior to debt service expense,” Silverman said in a statement.

Landlords, particularly mall and shopping center owners, also have a vested interest in having these larger retailers pivot as strongly as possible out of debt-induced bankruptcies. Some are even taking aggressive approaches to see that retailers they collect rent from don’t go under during the pandemic. Brookfield Asset Management’s decision to invest $5 billion in retailers with pre-pandemic revenue of at least $250 million is probably the biggest example.

But such moves might only work in those malls and centers in prime shopping areas. In areas where debt-laden retailers were already struggling, the pandemic could reap a terrible whirlwind.

“If a Class B mall that already was having trouble loses one or two of its main draws, that could either start or accelerate a downward spiral,” said Matthew Halpern, a senior analyst at Moody’s.

Indeed, the health of retailers has major implications for landlords and their ability to make mortgage payments. From the start of March through early April, as the economy began to shut down due to the pandemic, 173 commercial mortgage-backed security loans arranged under post-2008 terms and totaling some $10.1 billion were transferred into special servicing, according to Moody’s Investors Service.

The majority of the loans had been taken out on properties leased to retailers and hospitality companies. The rush to special servicing was due to borrowers having trouble fulfilling their debt obligations, “a trend that is expected to continue” due to the coronavirus, Moody’s said.

Compounding all of this are two threats that even larger retailers in healthier hubs confront. One is that larger retailers should, as of mid-May, not expect much help from the federal government. Its Paycheck Protection Program applied to retailers with fewer than 500 employees, and the $454 billion CARES Act precludes funding for companies deemed especially risky — which can include those retailers whose credit ratings have degraded.

Then there’s the illusion of online sales picking up the slack during the shutdown. “[E]ven brick and-mortar operations that have invested heavily in their e-commerce capabilities won’t be able to offset steep losses from store sales via their online platforms,” Moody’s said in that same May report forecasting operating income drops.

This all leaves retailers struggling with debt servicing with a solution that’s perhaps both the riskiest and the easiest available: selling more goods once the economic shutdown ends.

“It really depends on what’s going to happen when stores open,” Mandarino said, “and will there, God forbid, be a second huge wave of coronavirus after we start working and we have to stop.”