Second Wave: What Real Estate Can Expect If NYC Goes Through Another Lockdown 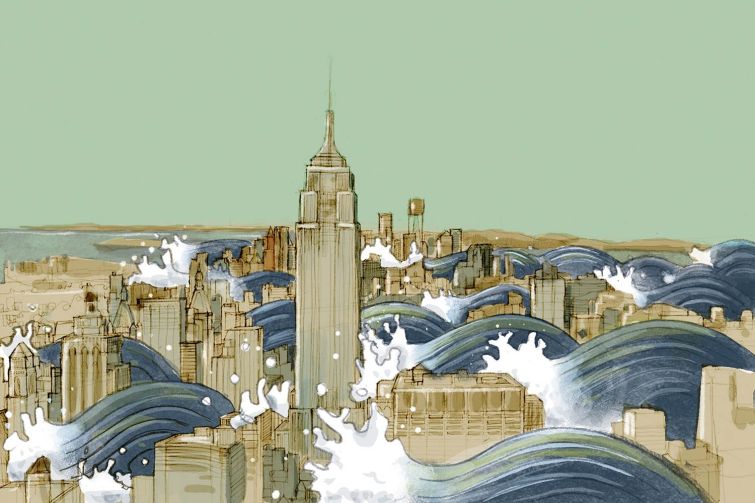 The city's commercial real estate market could be in for even more pain if a second wave hits New York City. Illustration by Matthew Baek

We thought we won.

After the horrific spring, where New York City was ground zero for COVID-19 and residents spent months largely confined to their apartments, with the state and local governments implementing strict lockdowns to slow the spread of the highly infectious coronavirus, by September, it looked like the worst was over for the city.

Not that anybody was overlooking the collateral damage. More than 23,000 people died, office leasing nosedived, thousands of restaurants are expected to close, retailers have been filing for bankruptcy left and right, and there have been reports of residents fleeing to the suburbs.

But the restrictions started to ease in the late summer with workers heading back to office buildings and diners to restaurants, bringing some signs of life back to the real estate industry. It was no longer New York that had to worry; the virus had been expelled from Gotham.

However, as infections begin to creep up in some New York neighborhoods, fears of a second wave have started to emerge.

In recent weeks, neighborhoods around Brooklyn and Queens have started to see increases confirmed cases. The first week in October had a seven-day average of 520 infections citywide, close to what Mayor Bill de Blasio said was a key “threshold” of 550, The Wall Street Journal reported.

Earlier this month, de Blasio started to impose new restrictions on about 20 zip codes around the city — including those that contain Borough Park, Brooklyn, and Kew Gardens, Queens — affecting more than half a million New Yorkers.

“This will not be easy at all,” de Blasio said during a press conference earlier this month. “But it’s something that we believe is necessary to keep this city from going backward toward where we were months ago.”

The new restrictions mean schools and nonessential businesses in some areas could be closed again, while outdoor and indoor dining will be stopped in all of the zip codes targeted by them. As a result, some residents in Orthodox Jewish communities have taken to the street in protest, burning masks and, in one case, attacking a journalist.

“The overall impact is just a combination of economic and psychological pain,” King added about a second shutdown.

Neither de Blasio nor Gov. Andrew Cuomo have broached reimplementing full shutdowns around the city, but another one could prove the death knell for many struggling small businesses, experts said.

“It would be catastrophic,” said James Famularo, president of Meridian Retail Leasing. “They were so battered and stretched so thin. The people I’ve spoken to said, if there’s a second wave, I’m done.”

The city is already struggling with a recovery from the first wave — including an expected $9 billion loss in tax revenue over the next two years and the Metropolitan Transportation Authority warning of doomsday cuts without federal aid — that a second outbreak could curtail.

“If we want economic recovery, we need a recovery from the pandemic first,” James Whelan, president of the Real Estate Board of New York, said. “The bottom line is, if this virus continues to spread and increase, you’re not going to see economic recovery.”

Even without full-blown lockdowns, the flare-up of cases has made some realize that New York’s road to recovery is going to take longer than people originally bargained for.

“We’re all expecting that things are going to gradually reopen, though I believe people are beginning to see that even January may be too early,” said Douglas Durst, chairman of the Durst Organization. “It’s just going to prolong the present situation.”

New York City is not alone in dealing with the beginnings of what could be a second wave.

California already reimplemented shutdown measures, and countries around Europe are dealing with increases in COVID-19 cases. Last week, the United Kingdom started a three-tier system to implement varying degrees of restrictions in different parts of the country, and leaders are considering a second set of lockdowns, the BBC reported. Also last week, France reinstituted curfews in nine cities, including Paris.

But it’s Israel that could provide a glimpse into what New York City’s real estate is in for during a second wave.

In September, Israel implemented a second full lockdown after it saw an increase in positive cases, Haaretz reported. The infection rate has since started to decline, and leaders were expected to start easing restrictions over this past weekend.

The first lockdown in mid-March drove down the value of commercial real estate in the country by 25 percent, according to Haaretz. Just a month after the second wave, those assets’ value fell by another 5 percent.

Business assets hit hardest by the pandemic — those connected to restaurants and retail — had even larger drops during the second shutdown. During the first wave, those assets lost 25 percent of their value and have already lost another 10 percent, Haaretz reported.

And those businesses are also the ones likeliest to feel the most pain in New York City if a second set of shutdowns hits.

“Everybody I speak to is out of [Small Business Administration] money, they’re out of [Paycheck Protection Program] money, they’re hanging on by a thread,” Famularo said. “I don’t think people could take another shutdown. That will be the final blow.”

Restaurants generally run on razor-thin margins during good times, but the loss of indoor dining, as they were forced to switch to take-out or to-go models, made survival even more precarious. There’s expected to be a wave of closures in the future, and thousands of workers have already been laid off.

In August, 87 percent of restaurant, bar and nightlife venues around the city reported they could not cover their full rent, according to a survey by the New York City Hospitality Alliance. Of the 500 polled by the group, 34 percent said they couldn’t pay a dime.

Major retailers, such as Gap and Bed Bath & Beyond, have been unable to pay rent as well, leading many landlords to take them to court for payment, which could get much worse during a second wave.

“Certain businesses have been absolutely decimated and they will never come back,” Citron added. “Landlords [have] got to deal with that.”

Should a second wave hit, the office and retail markets would likewise have to deal with an MTA that is already pleading with the federal government for a $12 billion bailout, after the pandemic tanked ridership levels.

“It’s clear that the COVID-19 pandemic is hitting the MTA harder than any past crisis, and the near-term impact is much steeper,” Pat Foye, chairman of the MTA, said during its monthly board meeting in September. “The MTA faces an existential threat, where enfeeblement is the short-term risk and extinction is the worse-case scenario.”

After the strictest shutdowns were implemented, the MTA faced a 90 percent drop in ridership, according to a report from New York State Comptroller Thomas DiNapoli. Even with people returning to work, the MTA doesn’t expect fare and toll revenues to reach pre-pandemic levels until 2023, creating a $10.3 billion drop in revenue, the report found. The agency is “reliant on a return to 2019 ridership levels by 2023,” a goal which a second wave could tank.

“The biggest threat to the MTA and millions of New York riders is federal austerity, not the risk of COVID-19 infection in transit, which is very low,” Danny Pearlstein, a spokesman for the transportation advocacy group the Riders Alliance, said in a statement. “However, doomsday transit service cuts would seriously hamper the city’s response to a second wave by stranding essential workers and miring emergency vehicles in gridlock.”

And, this will no doubt seep into the multifamily market as well. Last month, the average rent for apartments in Manhattan fell by 8 percent compared to last year, while the vacancy rate and number of days a listing stayed on the market increased, according to a report from real estate company Douglas Elliman.

Gov. Cuomo extended a moratorium on most evictions in the state until Jan. 1, 2021, but what happens after that is anybody’s guess. Landlords can now sue for missed rent, but the courts aren’t putting these cases on the calendar, leading to a huge backlog, said Deborah Riegel, a lawyer at Rosenberg & Estis.

“The longer this goes on without some legislative body thinking of a solution, the worse you’re making the problem for these tenants,” Riegel said. “It’s one thing for somebody to pay back four months of rent over some period of time. The longer you stretch this out, the more rent that there is to be paid back.”

The further behind tenants fall in rent, the less likely landlords will see any rent from them, which could further deplete the city’s tax base, as owners will be unable to cover their bills, Riegel said. This problem looms especially large in the areas seeing a resurgence in COVID-19 cases because they’re filled with smaller owners.

“You’ve got a lot of owners in Brooklyn and Queens who may have three-family homes, or four- and five-unit buildings, where the rental income is their livelihood,” Riegel said. “They can’t afford to go a year without rental income.”

Riegel added the eviction moratorium has been a Band-Aid that doesn’t address the problem facing both tenants and landlords: residents’ inability to pay rent  while owners still need to make mortgage and property tax payments.

Even if a second wave doesn’t hit the city, the threat of one has made some gun-shy about opening new retail stores or restaurants, Famularo said.

“It was on everybody’s mind, and keeping them away from guys like me,” he said.

The office sector doesn’t have a much rosier outlook. Even without a second wave, Cushman & Wakefield’s “Global Office Impact Study & Recover Timing Report” released last month expects office leasing activity around the world to not reach pre-COVID-19 levels until 2025.

While it might look like a grim situation, New York City’s tactic of only implementing targeted lockdowns did give some people hope that Manhattan won’t be fully shut down again, since most of the cases have been in the outer boroughs.

“It was kind of reassuring that Manhattan is not going to be closed down,” Famularo said. “Now that they’ve isolated per zip code, that seems to have loosened up the business community as a whole. They seem to be more confident that they’re not going to close the entire city down.”

Citron added that it was an important point that office buildings in Manhattan — which still haven’t had full staff return to work — not having an outbreak as “good news.”

“The landlords are taking it very seriously and the tenants are working with them,” he said. “They’ve made a tremendous effort to follow the government mandates.”