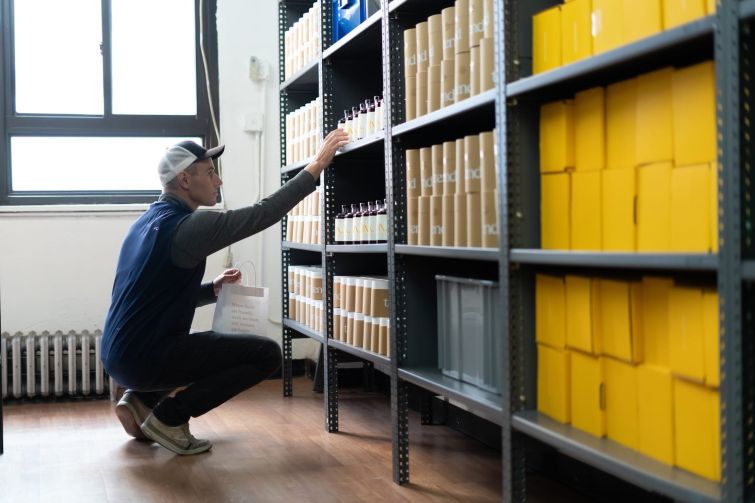 A micro-warehouse run by Ohi, which takes over unused office and retail space to create distribution hubs for direct-to-consumer brands. Photo: Ohi

Say goodbye to your local mall’s JCPenney and hello to a shiny new Amazon warehouse.

Simon Property Group, the biggest mall owner in the country, has reportedly been in talks with Amazon to turn some of the vacant anchor stores in its properties into fulfillment centers for the e-commerce behemoth, The Wall Street Journal reported over the weekend.

The move makes perfect sense for Amazon as the move would allow it to plant fulfillment centers closer to some of its customers and speed delivery times. It would also serve as a way for Simon to fill empty blocks of space, especially as dozens of retailers filed for bankruptcy during the pandemic and many did not pay rent.

However, it would be a seismic shift in the way malls have operated for years. Anchor stores usually drive foot traffic to shopping centers, including to other smaller stores in the properties, something an Amazon warehouse is unlikely to do.

“You’re reducing foot traffic by taking away these large entities,” said March Betesh, founder and CEO of accounting software provider Visual Lease, who previously worked on commercial lease negotiations as a lawyer. “This is the calculus that Simon and others are going through right now: Is it better to have nobody there? Having a store that is in bankruptcy and has signs all over the place?”

A spokesperson for Simon did not respond to a request for comment.

“Amazon has a policy of not commenting on rumors or speculation,” Leah Seay, a spokeswoman for Amazon, said in a statement.

On its earnings call this week, Simon CEO David Simon declined to address the Amazon rumors but said the shift to industrial in malls would be a good thing for mall owners.

“Generally, I’d say, the important thing going on that we’re seeing is that more and more retailers are distributing their e-commerce orders from their stores,” Simon said on the call. “They’re fulfilling from their stores and also curbside pickup, or all sorts of fulfillment options are available. That’s a good trend long-term for us.”

While a Simon-Amazon deal might represent the most extreme example yet, converting unused retail space isn’t going away anytime soon. The trend has been growing the past few years and the coronavirus pandemic — which forced shoppers to stay at home — kicked it into light speed.

“We’ve seen a very, very rapid increase in demand from e-commerce companies and their consumers,” said Ben Jones, founder and CEO of Ohi, which turns empty retail stores and office space into micro-warehouses for direct-to-consumer brands. “Everyone’s woken up to the fact that micro-warehousing is the future of commerce.”

Since 2017, about 13.8 million square feet of retail space around the United States has been converted to 15.5 million square feet of industrial, a CBRE report found. As of July, there are 59 retail to industrial conversions either in the works, completed or in the planning stages since 2017, up from 24 in January 2019, according to the report. These include the Randall Park Mall in Ohio, which Amazon turned into an 855,000-square-foot warehouse that opened last year, The Plain Dealer reported.

Retail-to-industrial conversion isn’t just about demolishing an abandoned mall to build a warehouse from its ashes. Companies like Ohi and Fillogic made businesses either taking over space vacated by retailers or unused storage spaces in malls.

“A lot of the spaces we look at are basements, old storage spaces, any type of excess capacity,” said Rob Caucci, co-founder and co-CEO of Fillogic. “We don’t need contiguous space. As long as we can lock it and alarm it, that works for us.”

Ohi and Fillogic’s warehouses require less space — between 2,000 to 10,000 square feet — to operate and don’t require too much work to get up and running.

“We put in security cameras, locks, then shelving and pallets, then it’s a warehouse,” Jones said. “It’s really easy for us to just pop up and pop down locations. We’re not putting in a ton of robotics or a ton of tech in there.”

And, even with plenty of the focus on the larger e-commerce players and the giant warehouses, both Ohi and Fillogic have seen tremendous growth in recent months.

Fillogic currently has five locations in malls, and, while it prefers to stick with unused storage space, it has taken over some former retail space, and originally planned to open another five by the end of the year. Demand from the coronavirus bumped that number up to 13, and Fillogic is also partnering with some major landlords. In the last two months, it announced agreements with Simon, Taubman Properties, Macerich and Brookfield Properties to put locations in their malls.

Ohi has started to pump out 160 times the volume of packages than normal since February while landlords constantly buzz the company about taking over space.

“A lot of people are not paying rent right now or vacating space,” Jones said. “I think from a landlord perspective the market is looking pretty dire.”

Aside from giving companies like Ohi and Fillogic more opportunities to take over space, the pandemic shifted consumer habits even further online since stores were closed and customers were fearful of getting sick if they went to the ones that were open, Jones said. This also made consumers want their goods faster than ever.

In May, e-commerce sales around the country were up by nearly 93 percent, with people spending more than $53 billion online in April and May, and made up 22 percent of all retail sales, doubling last year’s 11 percent, a report from Mastercard found.

Projections have e-commerce sales slated to grow by 18 percent in 2020, while other retail sales are set to decline, Retail Dive reported.

“That would’ve taken a few years to shift,” Caucci said. “I don’t think it’s necessarily going to all go back offline.”

Unlike Amazon, Fillogic won’t be a direct competitor to existing mall retailers as it aims to provide its services and quicker delivery times to the stores already in the property. “I don’t know how that’s going to sit with them,” Caucci said about Amazon moving in. “I have a tough time imagining they’re going to be happy.”

Visual Lease’s Betesh said most mall leases have clauses that require landlords to have anchor stores within a certain distance to a brand’s location, which could be problematic if Amazon takes over an anchor.

“A lot of those clauses are going to fail,” Betesh said. “Landlords will have to accommodate and come to an understanding that allows [retailers] to continue to function.”

On Simon’s earnings call on Monday, one investor expressed concern that seeing a warehouse take over a giant block of retail space might dissuade people from shopping nearby in the future. For their part, both Ohi and Fillogic said they try to blend in as much as possible with a mall to not look out of place.

“In a perfect world, you don’t see us, you don’t know we’re there,” Caucci said.

Aside from the physical look, another potential problem about allowing in industrial users is that they tend to pay less rent than retailers. Industrial rents are typically below $10 per square feet while department stores can range from $4 a square foot to $19 a square foot in some malls, the Journal reported. Restaurant deals can be much higher than both. And it could make existing retailers less thrilled about paying such high prices for rent without an anchor to drive people in.

“The other retailers that are in malls might start saying, ‘Why am I paying premium rent to be in a mall that had a lot of synergy and now it doesn’t have any,’” Betesh said. “The premium that is paid to be in a place like that starts to lose its appeal.”

But, even with the potential downsides, the pain that retail has felt in the last decade has made the switch to industrial “very natural,” Betesh said.

“I don’t think what we’re seeing is that surprising,” he said. “A lot of the changes occurring and the push to reposition retail real estate is inevitable. It’s about who are going to be the trailblazers, and I think Simon is one of them trying to get in front of the trend.”