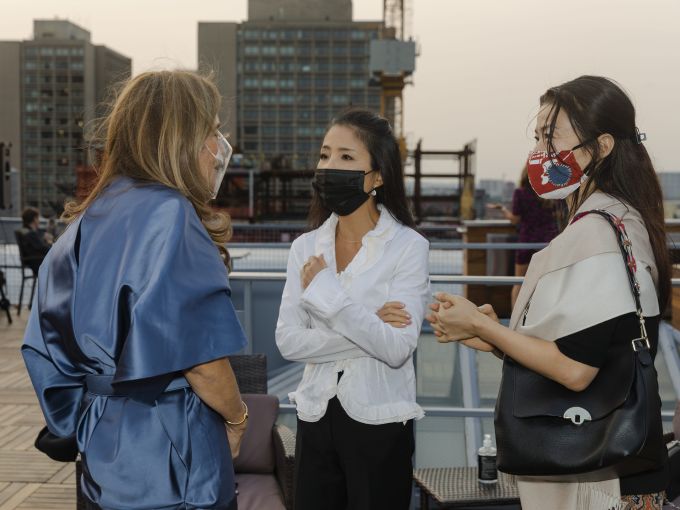 In the end they cracked.

Real estate is a personal, face-to-face business. The best brokers are the extroverts who can only really wax rhapsodic about the glories of glass and steel to your face. So after months of virtual tours, and Zoom meetings, and all sorts of other ways the brokerage biz kept buzzing, this week brokers surrendered to their former selves. CO wrangled an invitation to the first broker event we had seen in well north of six months.

And, although there were warnings that everyone should be masked, we have to admit, uh, not everybody was observing this.

Still, given that it was outdoors and we observed some masks, if you’re going to do a broker event in the age of COVID, you could probably do worse.

Nevertheless, the new abnormal hangs over us all still. And one can see it in another normal/not-quite-normal-at-all event this week: Commercial Observer’s annual Power Gala.

Unlike the previous 12 of these parties, where billionaires knock back martinis until they get each other in drunken headlocks, this one was fully virtual. And, while the idea of a virtual party has been tried many times in this era, this one was… really good. (We’d say “great” but modesty forbids.)

The top brokers in the business (Mary Ann Tighe, Bruce Mosler, Mitti Liebersohn, Peter Riguardi, David Falk) were on hand with some of the biggest owners (Don Peebles, Scott Rechler, Tommy Craig) and rather than a lot of patting on the back (OK, there was some of that) the conversation was much more substantive than standard cocktail party chatter.

MTA Chair Patrick Foye was on hand to discuss with Rechler the state of transit in New York; Peebles conversed with Dan Doctoroff of Sidewalk Labs (and late of the Bloomberg administration) and Margaret Anadu of Goldman Sachs about real estate’s lack-of-diversity problem.

Hopefully some of this party spirit can percolate down to the New York City nightclub business. Because things have not been going so great there. Some 82 percent have not been able to reopen or get any relief from their landlords.

Dare we have reason to hope?

It’s tough getting optimistic these days…. It feels like every piece of good news is accompanied by a helping of bad news.

To wit: U.S. retail sales are increasing. (That’s good!) But at a slower clip than we’d seen in recent months. (That’s bad.)

Sometimes the same news means good things for some, bad things for others. Like the report this week that work-from-home is causing a slippage in productivity. (“That’s GREAT!” we hear real estate owners scream. Not so great if you own a business.) And, before you get cocky, owners, BlackRock’s Larry Fink said this week he doesn’t see a full return to the office in the future for the world’s largest assets manager

But, yes, there was some news that just looked good without qualifications. Leases were being signed. Deals are happening.

And legendary real estate family the Wilpons agreed to part with their beloved New York Mets for a record $2.4 billion. (To get the skinny on buyer Steve Cohen and what this all means real estate-wise, check out CO’s deep dive.)

Plus, the good news was not just confined to New York. In California, despite an office market that is still reeling, reeling is taking place in the movie business — in a good way. CBRE saw a substantial increase in leasing and sales activity thanks to new film projects going into production.

That should give everybody comfort on this sabbath day. See you next week!