'We are looking to make deals’ 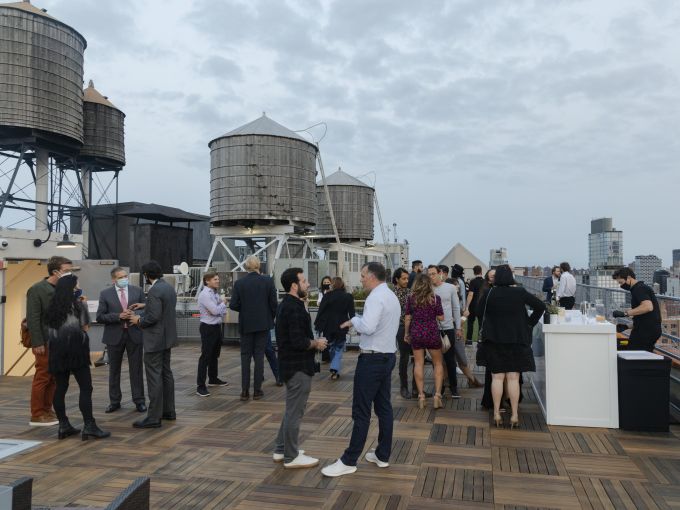 They’re ba-aack. Broker events, a staple of the handshake-heavy commercial real estate business, were put on indefinite hiatus when New York City shut down in March. Now, with the city in Phase 4 of reopening, marketing teams are once again hunting for leads in person, exchanging business cards, and hitting the open bars.

On Wednesday evening, Ken and Bradley Fishel, the father and son executive team behind Renaissance Properties, hosted what may be one of the first broker events to occur post-COVID. They served up cocktails and hors d’oeuvres on the rooftop of their landmarked office building at 632 Broadway in Noho, hoping to market 51,687 square feet of office space that has been left vacant due to coronavirus. Their building portfolio also includes office towers at 627 Broadway, 264 West 40th Street and 62 West 45th Street, as well as retail in South Florida.

“Please join the Leasing Team, Leadership of Renaissance Properties, and a carefully curated group of your friends and colleagues for a COVID-conscientious gathering on the roof deck of the building,” the invite read.

The elder Fishel told Commercial Observer at the event that COVID-19 has put commercial landlords in a “life or death situation,” making events like the one he was hosting “more important than ever.”

The response was resounding.

“We had gatecrashers the night of,” said Norah Lawlor, the publicist working the event. “Earlier in the week, someone shared the invite online and I got more RSVPs than the event could handle. I said to myself, ‘Why am I getting RSVPs from travel agents, doctors and influencers for a real estate event?’ I think everyone is just desperate to go out.”

The city’s current guidelines for gatherings limits crowds to 50 people. Lawlor said that her team counted each guest and turned away people claiming to be friends of friends. Other precautions included copious amounts of hand sanitizer and a temperature check for each guest. Masks were obviously required. Reps from Cushman & Wakefield, JLL, Newmark Knight Frank, Savills and the Kaufman Organization attended.

Despite the size limit, the party felt crowded at times and many chose to retreat with their groups to isolated corners of the roof deck – a reflection of the new normal the industry is being forced to adapt to.

Veterans of these after-work hours real estate events well know that vehement elbow-bending is the main objective for many attendees—nevertheless the hosts got things down to business.

“We’re asking $74 per square foot on the top floor of the building,” broker JD Cohen of NKF said over the speaker. “We are very flexible on lease terms. We are looking to make deals.”

Ken Fishel added that he has upgraded his building to include a second lobby—which will help control traffic flow to help with social distancing—a coffee bar and a bicycle room.

“We pay our commissions promptly,” Fishel told the crowd, which received a roar of applause. “We are looking to make deals. We are eager to make deals and the reason we threw this party tonight was to say, ‘Yes! We are in business. New York is in business and we are coming back strong.’”