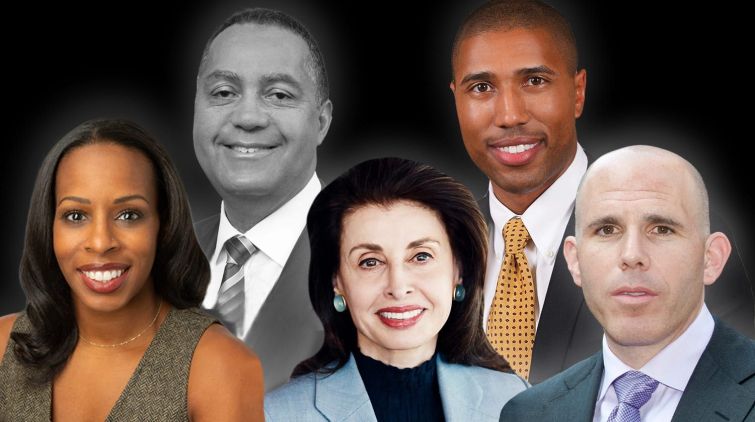 Instead of hosting our usual schmoozefest on West 57th Street, Commercial Observer decided to do something a little bit different for our (virtual) Power Gala this year: assemble thoughtful panels on the challenges facing New York City and the real estate industry.

Brokers and financiers tried to strike an optimistic tone about when the city will return to normal and whether workers will want to come back to offices.

“I think we’ll be walking on eggshells with masks on for the next four to five months,” said David Falk, president of the tri-state region at Newmark Knight Frank. “Hopefully there will be a vaccine so that we can start moving forward. We need to be patient to get New York back to where we know it can be.”

Bruce Mosler, chair of global brokerage at Cushman & Wakefield, noted that part of returning to normal will involve supporting the city and its businesses.

“We have to buy from a small business, and we have to reengage with the community,” Mosler said.

Mosler added that his brokerage had surveyed more than 50,000 workers and found that an “overwhelming number” of people want to come back to work.

“By and large, the office is still the epicenter of what’s going to take place,” the veteran office broker said.

Falk noted that “people have felt isolated at home. I know I was getting stale—I needed to have that collaboration and get inspired by my coworkers.”

Chad Tredway, head of the real estate banking division at JPMorgan Chase, said he even missed his commute from Connecticut into the city.

“I never thought I’d miss the Metro North. But I miss taking the train, and I miss getting a coffee with my coworkers,” the banker said.

And the work-from-home life certainly takes its toll. Jeff Fastov, a senior managing director at Square Mile Capital, called the quarantine lifestyle “one endless day, with no beginning and no end. It’s hazy and annoying.”

“Every day we see more and more people coming into the office,” Craig, the firm’s senior managing director, said. “We have a lot of people choosing to be in the office, to connect with each other and the people we work with.”

“We closed half a dozen transactions during COVID that are a mix of foreign banks, insurance companies, domestic investment banks and tech firms,”  Riguardi said, who appeared on the red carpet with Mosler, Falk and Avison Young President and Managing Director Mitti Liebersohn. “That classification of occupiers remains the foundation of the city.”

At the same time, institutional lenders have become much more conservative about financing projects in the city.

“Construction lending on spec office construction is lower, and even on new multifamily,” Tredway said. “We’re not seeing our clients get excited about anything on spec in New York City.”

Still, there’s financing activity around projects that have tenants lined up.

“The banks aren’t so excited about construction,” Andrea Balkan, a managing real estate partner at Brookfield Asset Management, said. “Things were getting a little overheated last year. With the banks pulling back on construction, it makes it more interesting for lenders like us.”

On the topic of transit, however, it’s hard to feel optimistic about the city’s future.

“I think we are on the precipice of another depression if the right steps aren’t taken in Washington, including $12 billion for the MTA, which is being held up by Republican leadership in the United States Senate,” Pat Foye, chair of the Metropolitan Transportation Authority, said. “Without the federal bailout, he said, “we may have to make service cuts that affect thousands of our colleagues.”

Foye argued that the subways, buses and commuter rails were completely safe, with mask compliance above 90 percent on both buses and subway trains. The agency has distributed four million masks over the past few months, he said.

“We need someone who isn’t as focused on ideology, and we need someone with a plan on how we can take our city to the next level,” Rechler said. “I think New York has seen little of that lately.”

Foye said he didn’t have a candidate in mind yet, but that he hoped for a strong leader who would support transit, safe streets, social equity and jobs.

Mid-program CO’s annual superlative awards were handed out; Cushman & Wakefield won the year’s COVID Responsiveness Award for its 6-Feet Office plan which was one of the earliest office plans to focus on social distancing. The design firm Gensler won the Green Future Award and Tammy Jones of Basis Investment won the Diversity, Equity & Inclusion Award, and she made an impassioned plea for real estate to get behind greater diversity plans.

The final keynote discussion of the Power Gala was introduced by NKF CEO Barry Gosin and focused on how New York City should tackle the financial challenges that COVID-19 created, and how the commercial real estate industry could become more inclusive.

Don Peebles, chairman of Peebles Corporation, argued that access to capital was what prevented more women and people of color from entering the industry.

Sidewalk Labs CEO Dan Doctoroff pointed to a more obvious problem: “People tend to hire people just like them, and we have to break that pattern,” said the former Bloomberg administration official.

“Most of the people doing the hiring are white men,” Peebles said. “Mike Bloomberg said it as well: Talent is dispersed equally, but opportunity is dispersed discriminatorily. If we want New York City to come back, it has to come back in a much more inclusive way and reaffirm the promise that New York offers, which is that you can do anything if you’re willing to work hard and not give up.”

Doctoroff noted that COVID simply sped up negative trends that were already affecting the city.

“The reality is that the city was shrinking in terms of the number of people before COVID, and that was a warning sign,” he said. “COVID has accelerated that in a material way.”

And the pandemic has only exacerbated the city’s housing crisis, despite countless articles lamenting empty apartments and the flight of the wealthy.

“I’ve been frustrated to read all these sensational articles about 15,000 empty apartments in Manhattan, and folks are saying, ‘Oh, well, great, maybe the housing crisis won’t be a crisis anymore,’” Margaret Anadu, chair of the Urban Investment Group at Goldman Sachs, said. “But that couldn’t be more false. And then you look at communities in the outer boroughs that were some of the hardest hit by COVID, and they’ve seen rent increases during this period.”